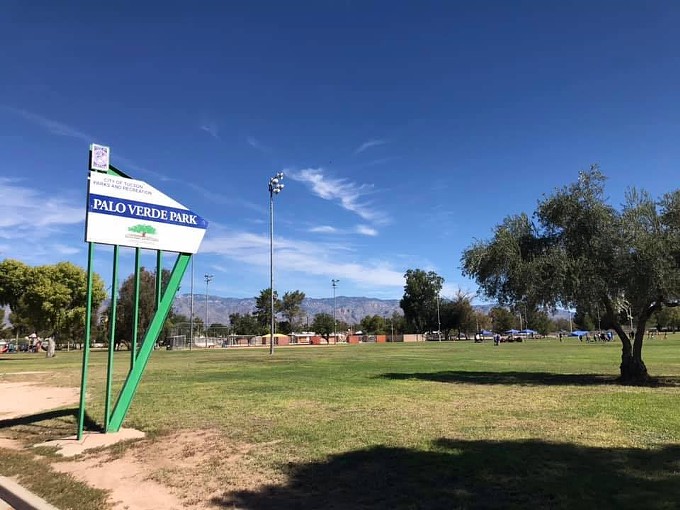 The lovely rat-a-tat-tat rises up and down. She sings in jittery syntax the chorus to Jackson 5’s “ABC” and bangs the underside of the slide with a stick in her own cool rhythm.

She stops. Looks around, says, mixing near-words in Spanish and English.

Rickie soon scrutinizes the monkey bars, places her hand on the highest rail she can reach and carefully pulls herself up, her face rapt, a toddler grimace with a little tongue sticking out. She balances her tiny feet and sandals upright on the under rail, nearly slips and catches herself. She lets her tiny body hang there for a few seconds, waiting, six or seven feet off the ground, her white dress fluttering in evening breeze, until I step beneath her and let her drop into my arms.

Mothers and dads collect in the distance around kids in youth football practice. There are no others here on the playground items at Palo Verde Park, just me and my daughter Rickie. It is her favorite park at the moment. It must be those monkey bars.

Our other girl, Zuzu, who recently hit her first birthday, is home with mama nursing a fever. Their big brother Reece sweats in dance class. Evenings in this park grip hard, and quiet little meditations come easy. Like, I never expected any of this life. Here, balancing Rickie in my arms, I know without those four others, I would be nothing. 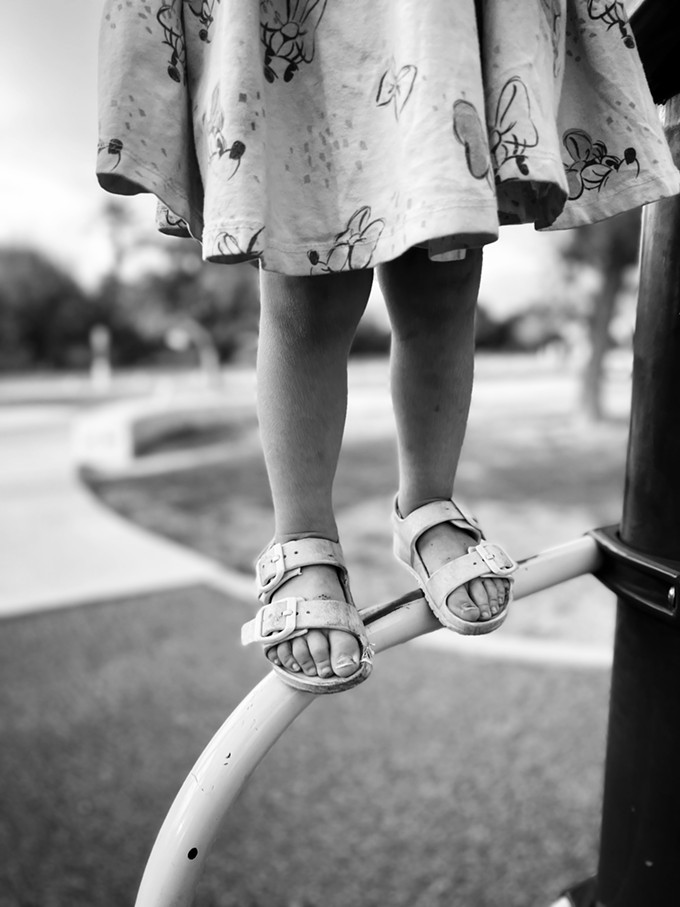 The park sits directly across the street from Kellond Elementary, my first school. In the decades since I was Rickie’s age (she turns 3 in October) the park hasn’t changed much. The great Afghan pines, the cool expansive green, the swimming pool, it all feels the same, and so there is a potent nostalgic sway of countless and lasting early memories. I know there will be new ones here now, and I can already feel the yearning.

The park memories circle as melancholy ghosts. My big sisters trudging across the fields of green grass on weekday mornings to Fickett Junior High, my big brother fenced in playing Little League baseball, or later, my mom kissing a man who wasn’t my dad in a car parked along the side of the park.

Between moments of absolute beauty here, compartments of dread reopen in my gut, the familiar fictions of the person I once was existing inside, still. If there are wisdoms honed from living a past life fraught with so much uncontrollable sadness and addictions, it is often invisible to me as someone’s dad. Yet things I’m actually good at appear to have no tangible application as a father, and I imagine my old man felt the same damn way. In many ways my children lead me, teach me. So much of this is pure intuition. The love and tenderness transcend data and files of someone else’s life, my former life. Even at my old worst, I, at least, remembered how the soul demands to seek out small wonders, the seasons and the rain, swirls of scents on desert walks and a western sky blooming orange. The inspiration of books, songs, art and love. Such things are the hub of existence, not some starting point to exploit or move on from in a quest for money, recognition, or whatever. The hub is a kind of internal church, a home, built on a couple of corny-sounding simple truths, words I use too often: empathy and kindness. My wife knows the truths too, another reason I look up to her, as I often defer to her for guidance.

A woman advertised her wares in an underground Phoenix adult magazine I edited and contributed to for a short while. It was in the mid-to-late 1990s. She’d come into the office with her ads and payments. She drove a nice car. I had met her there and got to know her somewhat. She knew routes to the things that mattered, poetics of the human condition. She was well-read, articulate, funny, and had a kind of opaque beauty reserved only for cameras. She had charity in her heart and a certain magic floated about her.

One night I was sitting in a bar with this woman. Over many drinks the nature of her existence revealed itself. She had been beaten and raped throughout her childhood. Beaten and raped again as a young adult. Now she worked for her own little company, an escort service, and she lived with some guy, not really her boyfriend more like her security, she said. He would drive her all over greater Phoenix to visit with clients, and she had many. Lots of women did this work. It was a big business in Phoenix before the internet took over. He would wait out in the car with a cell phone while she went in to do her work. If things got ugly, she would send him a code. Things went south several times and the woman could not get to her phone. Burn scars trace up her thighs, one eye is forever blurred, that sort of thing. She would tell me her horror stories, the freebase pipes and male trios surprising her in hotel rooms and the grotesque cruel men in big Paradise Valley homes with gardeners. So many things that would terrify anyone off the cliffs.

She had the keys to the church, that internal hub, which she’d discovered without help from anyone, not from her parents, certainly not from some random douchebag. Despite personal trust and emotional intelligence, she could not let herself in. She was not naïve and she had mounds of compassion, which shocked me. This from a person who had been let down in horrible ways by everyone her entire life.

I say this because I think of life cycles and human development while watching my daughter at the park, and the memory of this woman popped into my mind. I’d be horrified if I unconsciously tutored my children on the negative and the cynical, the very ideas that invite in countless ways living souls wound each other. Or the shut-in misanthropic tendencies I’ve worked hard to overcome.

I lost so much of my life, falling off what I now recognize as that hub, drunk and high searching for it. Fear and self-hatred or the thought of dying were the only instigators for change. We are damn lucky to share the poetics of life.

Rickie sometimes bites, kicks and scratches. Her brain is exploding. It’s as if she is articulating physically the things she can’t actually say. It causes pause and pain. It takes patience to teach her.

When I get tired or down, the world becomes a sequence of binaries, one and zeroes, wrong or right, based on my inconclusive studies of my own childhood, and observations of others. Comes down to my three children. Every movement a question, every reaction second and third-guessed. Now, an inner voice pipes in, “trust that hub.” It is not God or religion or 12-step or cult speak. It is just my home.

If I raise my voice at my children it frightens me. There is subsequent emotional backwash. It is the same sensation and shame I felt after my father would belt me. That hard, dead fear, as well as the shakes and heart shudders. My father could not contain his anger when we were young, his hands turned giant and bruising. I couldn’t imagine hitting one of my three children, and the regrets at even raising my voice enforce personal recalibration. Raising my voice flies in the face of everything I believe.

Random parents appear at this park on most days. I admire them from afar, their pleasures and griefs veiled in the everyday moments, beyond the common language of parenthood. I watch other parents too, bored expressions usually cast to a screen, and it boggles the mind. They are almost always the same ones who scream at their children. How are they not transfixed? These lives from seed sprouting limbs and thoughts and desires, hungers and joys, perform before them. Sometimes when I surge down slides with Rickie and her new little friends, I am not her dad. I am someone she plays with, even when a boy comes up and says, “You’re too old to be on the playground!”

I am overwhelmed at my children’s growth and curiosity. It is wonderment in their wonderment at all they confront. The education, for me, is endless.

At Palo Verde park, dark clouds eat the light, and I straddle the monkey bars and barely make it across without pulling out my arm. Took real effort but worth it because Rickie watches. She jumps up and down, her face a firework of joy.