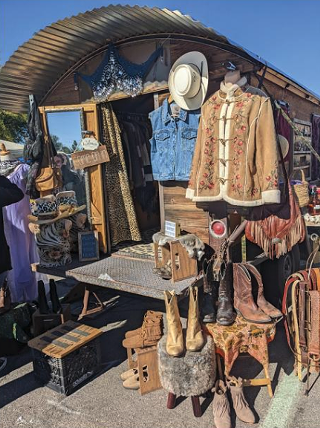 We went to Park Place Mall last weekend, as Jeff said, almost purely to be masochistic. The rise of the internet has meant the steep decline of malls, but things are always a little more bustling around the holidays. The goal was to soak up the atmosphere that obliterates the line between sentimentality and commercialism—that too-bright, overly glossy, smack-you-in-the-face holiday cheer only a mall can provide. We wanted to see a Christmas tree in a Dillard’s. We wanted to see parents deliberating between which Lego sets to buy, men asking for advice at jewelry store counters, and winding lines for places like Wetzel’s Pretzels.
But just before we left the house, I learned about the Dirty T Flea, which takes place every third Sunday in the parking lot for what used to be Sears (RIP Sears) at Park Place. Why not?
The Dirty T Flea is a new market full of mostly not-new items. It’s a treasure. We’ve hit our fair share of local markets this holiday season, and they’ve all been lovely, but this one stood out for its self-described “punk rock” spirit. (Other descriptors on the website include “super freakin inclusive” and “one heck of a huge monthly market.”) It’s hosted by When + Where Co. and its offshoot Woolly Fern Oddities Shop, both owned by Bridgett Scofield, with the latter co-owned by Jenny Martin.
One of the first things we see is a car topped with a mannequin torso wearing a green feather boa around its neck, two large pom poms atop its head and two tiny Santa hats over its nipples. The punk, avant-garde tone is set.
At one booth, there is a man wearing a blue hat which reads “America” and features an image of Abraham Lincoln in patriotic sunglasses. He tells one man, decked out in gold chains and rings, that anyone wearing that much gold must have a ’vette in the garage.
“I do,” says the man dripping in gold, almost
defensively.
Abraham Lincoln man explains that he used to have a lot of gold too, once.
“Now,” he says, cracking himself up, “I’ve just got a bunch of piddly junk.”
The piddly junk is fun to sift through. Old patches, a pile of pocket knives, a tube of pennies from the 1950s, scattered pieces of jewelry, tchotchkes galore. I watch one woman buy a “Class of 1985” pin, while a couple haggles with the vendor over the price of a pair of overalls and another customer plays with the knives.
A market which embraces the adage “One man’s trash is another man’s treasure” is truly in the spirit of “The Dirty T.” Our friends at Visit Tucson explain this grittiest of nicknames perfectly on their website: “Tucson is more grit than gloss, more substance than sheen. If you want to call that ‘dirty,’ so be it.”
There are plenty of artisan booths, selling beautiful handmade pieces, including jewelry, candles and embroidered bags. And there are sophisticated antiques, like turquoise jewelry, carnival glass and vintage Pyrex. But many booths are just like Abraham Lincoln’s: tables covered in Christmas ornaments, dated DVDs, costume jewelry, boxes of comic books, $1 vinyl records, pots and pans, old pins, post cards from all over. I see a tiny statue of Gollum from Lord of the Rings, a coffee cup shaped like Sylvester the Cat, a stack of oddly specific cookbooks, and a pair of salt and pepper shakers which look like ears of corn.
“All the Christmas ornaments are a dollar a box or a dollar a bag!” announces a man with a gray beard and squinty eyes, who looks like he could go by
“The Dirty T” himself, if he wanted to.
“Where did you get all of these ornaments?” I ask him.
“Here and there,” he says, as though that’s an actual answer. It is the actual answer, though—and perhaps the only honest one.
Christmas shopping can feel meaningful and magical, but, especially in a year where so many of us are feeling burnt out and exhausted, sometimes it feels more like endless strolling up and down aisles, or endless scrolling up and down the internet, in search of just the right gift. Maybe the thing I’m looking for is in the next aisle, on the next curated online gift guide, at the next store, or at the next holiday market. At the Dirty T Flea, there’s pleasure in the search itself.
We leave with four books, a handmade ornament, a novelty coin trick and a stack of greeting cards from the 1970s. So it was a success, if success is to be measured by whether anything was bought. And you know what? When we did go to the mall afterwards, it was just the all-too-fluorescent, aggressively commercial ’90s mall atmosphere we’d been hoping for—but after leaving the flea with an armful of treasures, nothing in the brightly lit mall seemed worth buying. ■

More »
More Pick of the Week
All City Week
Comments (1)
Add a comment
Subscribe to this thread:
By Email