A century in the making 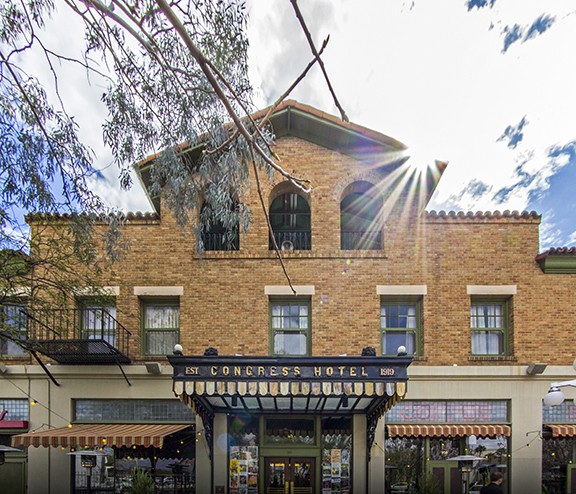 Courtesy photo
Hotel Congress is looking forward and backward for their centennial celebration.

311 E. Congress St.
Noon to 4 p.m. Sunday, Nov. 24
Free, All ages
hotelcongress.com
For their centennial celebration, Hotel Congress is looking backward as well as looking forward, but they're not the only ones doing so.

The Century of Tucson party is, of course, a long time coming, and for the big day, Rialto Theatre, Tucson Symphony Orchestra and Arizona Public Media are joining in as well. The family-friendly event features the to-be-expected festivities like live music and food, but the unique occasion allows for the local organizations to show off their specialties, and their histories as well.

"Rialto and us have always talked about doing something together," says Hotel Congress Entertainment Director David Slutes. "Then about a year ago, we had some business with Tucson Symphony Orchestra. They mentioned they had an event coming up, and Arizona Public Media also had their 60th coming up. So we thought, 'Why don't we have all these cultural entities come together and celebrate in one big event?'"

"Everyone got to decide how to best represent themselves," Slutes says. "For TSO, it's obviously music. Rialto is working with El Cine Plaza to harken back to their history. We thought that would be a great representation and way to activate all our spaces."

"They produced from midnight to midnight, like 'A Day in the Life of Congress,'" Slutes says. "It's a pretty neat snapshot, and we're all excited to see it. You get to see everything that goes into putting on what we do here, from the restaurant to the nightclub to the hotel. You can see Tucson just flow through this place, and it debuts at this event."

It being a 100-year birthday party, Congress is also excited to present Tucson's largest birthday cake.

Across the street, Arizona Public Media and Local First Arizona are taking over Maynards Market & Kitchen for a "kid-centric roadshow vendor fair." The fair will host local companies selling products just for kids, and also includes a PBS kids corner.

The Rialto Theatre is celebrating their past by bringing back El Cine Plaza, a Spanish-language movie house which ran through the 1970s and 80s. Rialto will screen both short and full-length Spanish-language films, including Al Son Del Mambo, Escuela De Vagabundos and The Three Caballeros, plus a special performance by Sergio Mendoza.

With a theme of "looking forward and looking back" on their history, the party also includes the creation of a new time capsule in the Hotel Congress plaza. The time capsule, which is shaped like a giant capsule a bit smaller than a car, will be buried in the plaza and is set to reopen at Hotel Congress' 200th birthday in 2119. Slutes jokes that a few of the longtime Congress employees, himself included, will most likely still be working there when it reopens.

"We've got a few things to put in there, and we've asked the public to bring down a few more things that might be good to pop in there as well," Slutes says.

Guided historical tours will center at the event, and progress throughout downtown as well.

"We'll talk about how our community is growing, and how we're growing with it," Slutes says. "If you take a snapshot, it might look very static, but if you really look at it, we've never stopped growing, and we've never stopped changing. We move as the community moves. We've always been very adept at focusing on that, and I think that will be reflected in the event."