A Cabaret for today 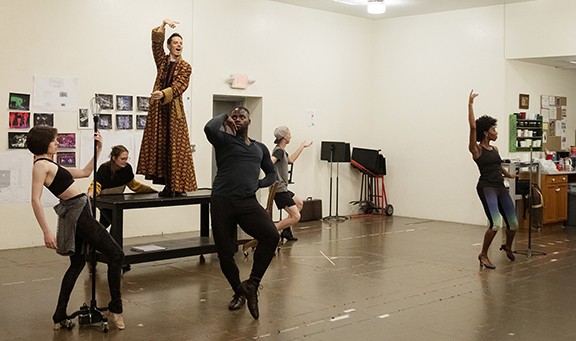 Courtesy photo
The Company of ATC’s Cabaret in rehearsals.

The world of Cabaret, Arizona Theatre Company's next production, is centered at a nightclub called the Kit Kat, where a character called the Emcee oversees a world of decadence, bawdiness and reckless abandon. In the show, a German boarding house owner falls in love with a Jewish fruit vendor, an American writer falls in love with a British cabaret dancer, and, as the Nazis begin to rise to power, some characters refuse to face reality, while others are left with no choice.

Sean Patrick Doyle, who plays the Emcee in the show, spent the week before rehearsals began visiting his sister in Berlin, traveling solo through Poland on the way. He stood in the barbed wire fences at Auschwitz-Birkenau and felt the weight of the show he was about to perform in.

"We need to not only honor the people who were lost due to the failure of people who were apolitical during this time, but also enlist the audience," he says. "This is not a relic we're presenting. We're living in a moment of history with consequence."

Doyle says he's taken great care to create a character who is also a human, infusing moments where it's clear that it's not always so easy for the emcee to put on a glittery, perfect show every night when the world around him is crumbling. To include something of a plea, or a call to action, for the audience. Doyle is personally familiar with this struggle.

"I remember vividly performing in Kinky Boots on Broadway—in this big, glittery, happy, smiley finale—on the day that Trump was elected. We had two shows," he said. "The struggle to sort of compartmentalize and pack away those feelings in this moment is like nothing I've ever experienced before."

The show's female lead, Sally Bowles, played by Madison Micucci, takes the compartmentalization faced by many performers a step further.

"I think her way of coping with the stressful politics is to ignore it, and to find her joy as a performer and to seek love and security and refuge within the safe, accepting enclave of the cabaret, which begins to break down, of course," Micucci says. "Her feeling is, you know, this is my home. I'm here 'til the end. And she kind of intentionally turns a blind eye to the stuff happening around her."

While Cabaret is full of showy numbers that occupy important places in musical theater canon and in the ears of many of the genre's fans, it's by no means an hour and a half of happy-go-lucky showtunes. It's meta in that it's a show about performers, yes, but it zooms out in time and space as well. We, the audience, know what is coming with the Nazis' rise to power in Berlin, and, knowing exactly how much there is to be worried about, might want to scream at the characters to wake up, that apathy won't offer escape or relief.

The artists behind this show aim to highlight Cabaret's continued relevance in today's world. Numbers like "Money" satirize the greed of the One Percent in today's world, while "Two Ladies" becomes a statement on toxic masculinity. But political satire and lampooning of authority figures from the original production needs little adjustment to carry weight today.

"Some people say, 'It can't get much worse. Our system of democracy will never allow for that kind of terrible, tyrannical regime to take place again,'" Micucci says. "And we're kind of taking the onus off of us in a way, and reasoning ourselves out of it in order to preserve optimism and hope."

Doyle says this consideration was part of his decision to represent a person "living beneath the showman" with his character, rather than a caricature of the era's hedonism.

"Cabaret is, at its core, a cautionary tale about the dangers of apoliticism and apathy," he says. "It really is the most appropriate show to do right now."