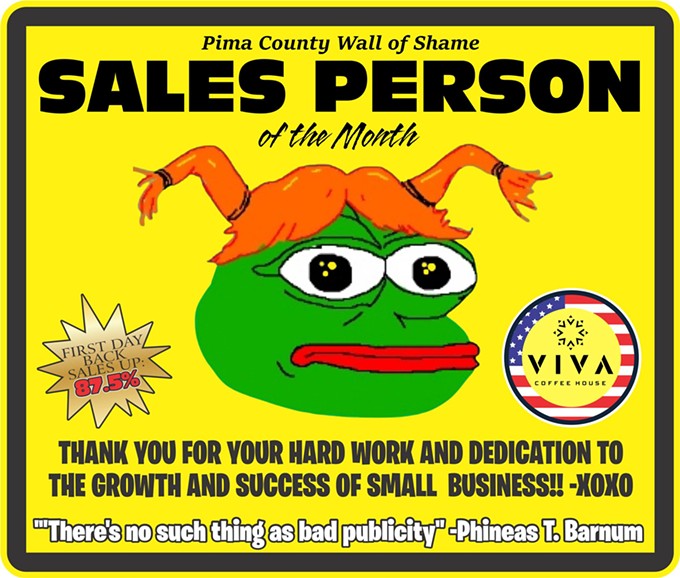 Infractions such as employees not wearing masks while serving customers, lack of signage alerting the public to not enter if they're experiencing coronavirus symptoms and lack of signage encouraging social distancing protocols have been routinely disregarded by the shop's staff, as witnessed and reported by county health inspectors.

After three failed inspections between Sept. 9 and Oct. 5, the county suspended Viva's food service permit. Once the business showed proof of compliance, the county lifted suspension on Oct. 9, with a final warning - more violation and your permit will be permanently revoked.

Kelly Walker, who owns the shop with his wife Andrea and her parents, said they've tried hard to stay in compliance with the county's temporary regulations, but fall short due to a lack of education and communication with health department officials over what is actually required.

"We've been asking the county for sometime to clarify and we feel like we were shut down unjustly because we never really got answers for that," Walker said. "The takeaway for me is the county should educate and communicate so we don't have misunderstandings like this."

Walker believes his business is being targeted by the health department and the community after repeatedly charting on the county's so-called Wall of Shame since late July. Viva's first COVID-related inspection earlier in July showed the business was out of compliance with the county's regulations. Walker said he was under the impression the first inspection was supposed to be educational, not punitive.

"We did our due diligence but since we were put on the county website, we're getting harassed and receiving death threats," Walker said. "We've literally had such bad threats that my wife won't let our kids play in the front yard."

Health department records indicate Viva was in full compliance with county regulations on July 28. However a complaint to the department in early September sent health inspectors back to Walker's shop on Sept. 9. Once confronted that his shop was out of compliance due to employees not wearing masks while serving customers, the owner kicked the inspector out. His inspection lasted a total of 11 minutes, according to the report.

"When the inspector came, I asked him to leave because (the health department) put our family and our staff in jeopardy," Walker said. "But I sent emails immediately saying, 'We still want to cooperate. Please come sit down with us and let's work this out.' But they didn't."

Walker decided to air his grievances over the so-called Wall of Shame during a Board of Supervisors meeting's call to the audience on Sept. 15. Within moments, the owner was asked to leave the podium by Supervisor Ramon Valadez after he began his comments to the board by reading obscenity-laced threats he claims he received from members of the community. When he refused, he was removed by the room by sheriff's deputies and cited for disorderly conduct.

Soon after, the county sent a letter notifying the owners that the business could be fined $1,000 a day and $10,000 per violation if they did not comply by Sept. 21. Health inspectors did a follow-up inspection and the shop failed yet again.

Instead of fining Viva, the county gave the Walkers another shot to take corrective action and be in compliance with the temporary regulations. They even let Viva schedule when inspectors would return. The owners responded on Oct. 4 saying they were ready.

Viva Coffee House's food service permit was suspended on Oct. 5 after the health inspector observed the shop's only employee on duty not wearing a mask while serving customers during the scheduled follow-up inspection.

"We invited the county back and said, 'Please come and resume your inspection. Let us know what we need to do and we'll put it into place,'" Walker said. "They did and again to our shock, they closed us down. It was based on our Sept. 9 inspection and I think partly based on me asking them to leave, which I think under the circumstances was a reasonable response."

Walker said his misunderstandings over mask requirements stem from a few of his employees—and himself—having health exemptions which would require them not to wear masks. In fact, the owner said he is fearful of getting sued if he asks someone, including his employees, to wear a mask in his establishment due to their underlying medical conditions.

"I think by law that (my customers) are protected by saying they have a valid health condition, 'I am exempt,'" Walker said. "Our biggest question was: Does that apply to our baristas? And we got the answer to that question."

According to a recent article in the the Journal of the American Medical Association's website entitled "Mask Exemptions During the COVID-19 Pamdemic–A New Frontier For Clinicians," the most notable mask exceptions are people with sensory processing disorders, facial deformities and chronic pulmonary illnesses with an active exacerbation. It is unclear if Walker or his employees suffer from these ailments.

Considering Viva's mask predicament, county health officials recommend the Walkers purchase face shields for employees who are mask-exempt to stay in compliance. They also gave the owners new signage to help Viva quickly reopen. Once Walker submitted proof that face shields were purchased and the signs were hung up, the county lifted Viva's suspension and the coffee shop was back to business by the afternoon of Friday, Oct. 9.

Loni Anderson, director of Consumer Health and Food Safety for Pima County, said this is the shop's last chance. Anything less than continued compliance will cost Viva its food service permit, according to Anderson.

"We will still be verifying onsight," Anderson said. "If we see any additional complaints at that point and if they're out of compliance, that would lead to the legal steps to remove their permit."

Anderson's department oversees the food service permits for more than 4,000 restaurants in Pima County. Out of that number, only a handful restaurants have found themselves on the wrong side of the county's temporary regulations and even fewer have been repeat offenders, she said.

She also said the so-called Wall of Shame is intended "for the public to be aware of places not in line with the resolution." It's a tool for the public to gauge where they want to consume food, she said.

"We understand there's some concerns but (businesses) are also afforded the opportunity to correct and be removed from it, as well," Anderson said. "Even before COVID-19, failed health inspections would be posted on media sites. It's the same thing."

But what really baffles the director about the situation is how easy it would have been for the coffee shop to stay in compliance and avoid all this trouble. Unlike restaurants that have been shut down in the past for costly issues like equipment failure or structural issues, Viva's troubles with the county were relatively cheap to fix in comparison.

"Technically, the items we're asking are easy to do in terms of any compliance," Anderson said. "This is easier in terms of providing a mask or face shield than a situation related to equipment to comply with the requirements."

Walker claims his inability to comply with the mask order doesn't have any political connotations.

However, his shop seems to be catering to a certain demographic after changing their logo to incorporate the American flag last month and hosting a large party of Trump supporters on Friday, Oct. 2, who flaunted their opposition to wearing masks with Walker himself in a YouTube video. Walker said the group only gave the shop a day's notice before their arrival and that wasn't enough time to implement social distancing protocols.

Viva's first weekend back in business seemed to be a great success according to a Sunday, Oct. 11 Facebook post featuring notorious alt-right meme Pepe the Frog as their salesperson of the month and boasting business is up over 87.5 percent.

"When you're in business, you don't want to alienate business or any of your customer base," Walker said. "I don't see the mask as political."