A public health program in Nogales, Sonora, brings together groups from both sides of the border to make life better for those with disabilities 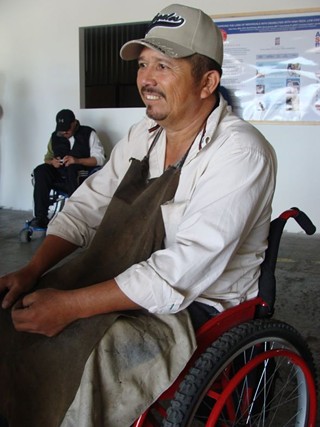 From the outside, a warehouse in south Nogales, Sonora, looks like just another factory among a dozen others in this industrial complex. But inside are rows of chairs, and in the middle of one row sits Cindy Guadalupe Garcia, wearing a shiny red jacket—and a beaming smile for everyone who catches her eye.

A pair of crutches leans against the metal folding chair the 32-year-old student and homemaker sits on. The left leg of her jeans is folded up to her upper thigh. The rest of her leg was amputated nine years ago after she was run over by an SUV. She's back at this space at Parque Industrial San Ramon hoping to finally be fitted for a prosthetic leg.

"It's been hard," Garcia says as clinic volunteer Cesar Nemer translates. "We're not supposed to discriminate against people who are disabled, but it happens. I'm hoping that a leg can help me get a better job."

There are 10 people, including Garcia, waiting to be helped in this busy place. The warehouse is the new home of ARSOBO (for Arizona-Sonora Border), a clinic that works with people who need prosthetics and wheelchairs. It will soon start an assembly project for low-cost hearing aids that come with solar-powered hearing aid battery rechargers and batteries. That project, according to UA College of Public Health professor Burris Duncan, will employ a group of deaf young people who live and study in Nogales, Sonora.

In the back of the warehouse, volunteers who work for Hanger, a nationwide company with offices in Tucson that produces prosthetics and orthotics for people with a range of needs, are putting the final touches on prosthetic legs. In another room, patients are being fitted with new legs and encouraged to walk on them. Many of them are moving without the help of a wheelchair or crutches for the first time in a decade or more. When patients walk back to the waiting area on their new legs, they are greeted with applause.

Hanger employee Holly Olszewski, standing over a sander while putting the final touches on a prosthetic, has been volunteering with ARSOBO since July, crossing the border with other Hanger workers to take casts of patient's stumps that will be used to form prosthetics back in Tucson.

Olszewski says Hanger's ARSOBO partnership—which also includes Rotary International, the UA College of Public Health, the UA audiology program, the UA Disability Resource Center and the Desarrollo Integral de la Familia, or DIF, the Mexican government's disability services agency—started as a project to find funds to start a prosthetics clinic, but the company and its employees decided to lend their expertise.

"We realized we could get donations, some used and some new, directly from manufacturers and fabricate the rest in our office," she says.

"We've been coming down every two weeks. I love doing nonprofit work. I've done work like this in Haiti and Guatemala, but it's great to give back to a community that's so close and has such a big need."

Next to where the Hanger volunteers work is an assembly area for all-terrain wheelchairs. Two men are helping a young boy with cerebral palsy learn how to operate his new wheelchair. As the boy, surrounded by his mother, father and little sister, is buckled into his new ride, a smile comes across his face, causing everyone else to smile, too.

The ARSOBO partnership traces its beginnings to a border conference on disabilities in 2008, when Duncan and others did an audit to determine where help was needed most. At first the focus was on low-cost all-terrain wheelchairs, but as the partners began working with other disabled groups in Sonora, the need for prosthetics became obvious.

Some early grants helped ARSOBO hire Kiko Trujillo as director, and then Gabriel Zepeda to start the wheelchair shop. The latest member of the team is Beto Rivera Gutierrez, who works directly with the Hanger volunteers and the prosthetics patients.

Olszewski says the goal of the Hanger partnership is to help ARSOBO's prosthetics clinic become self-sustaining. Gutierrez works closely with the Hanger prosthetics staff in Tucson, coming here every month to working alongside employees making prosthetics directly from the casts made the previous week in Sonora.

"For me it's everything," Gutierrez says about his work with ARSOBO. "It's been my therapy and a way for me to heal. There really are not enough words to describe it."

Gutierrez lost a leg in a car accident in 2003, which he says caused his life to fall apart. Through ARSOBO, he says, he found a new calling.

"Little by little I was getting to this place, helping people with disabilities. There are many obstacles and many are economic," he says. "This is a way to move those obstacles."

Zepeda, finished with the final touches on the young boy's new wheelchair, stops to chat, a rare break for him because Zepeda has been focused on making sure the chair is a perfect fit for the boy before he and his family return home to Sinaloa.

A look at his hands makes the kind of work he's doing obvious. They're calloused and dark from grease. He smiles when this is pointed out and mentions the amount of hand lotion he puts on when he gets home.

Zepeda has his own wheelchair story. After losing the use of his legs in a car accident, he found himself in San Francisco more than 20 years ago undergoing surgery to help his mobility. There, through San Francisco State University, he met Ralph Hotchkiss, who designed the all-terrain wheelchairs Zepeda now builds and customizes.

A year after Zepeda left the San Francisco hospital and returned to Mexico, Hotchkiss asked him to become part of an international team learning how to put the wheelchairs together and teach others how to do the same thing. Zepeda says he had to hire a coyote to help him cross the border illegally so he could get back to San Francisco for the initial training.

"It's been amazing work helping to create these shops all over—Latin America and even in Europe," he says.

While it's provided him with a life-changing vocation, Zepeda says it's seeing the looks on the faces of the children and the families he's helped that gives him the most satisfaction. "We know we are changing their lives for the better," he says. "We see that happen as soon as they arrive."