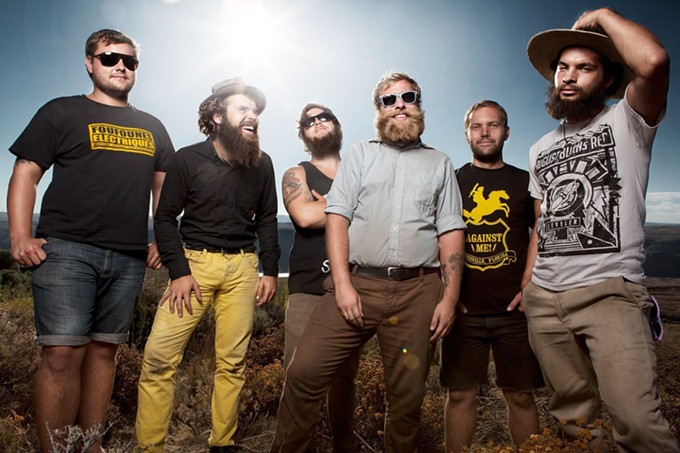 Courtesy photo
Larry and His Flask

Larry and His Flask

For a lot of musicians, there can come a time when the love of performing wears down and what's left feels more like a chore than anything.

Facing down a big question—Is this the end?—can split a band apart or reveal just how much the music matters.

For Larry and His Flask, a Bend, Oregon quintet known for a wildly energetic combination of punk and bluegrass, answering that question took some time. But to even face it, the band simply had to stop its hectic pace and step away, says drummer Jamin Marshall.

"We basically were doing about 200 to 250 shows a year for a while," he says. "It was crazy. We'd do two months in Europe and immediately fly to Boston to do a music video and then immediately drive to Canada for another tour. We took a big break because we were basically burning ourselves out on the road. We basically had to get out of the van."

At that point, Larry and His Flask had been running steadily for 15 years, morphing from the first few years of hardcore punk to an acoustic band, while maintaining the dynamic energy that's been at the core all along. As street buskers, they learned build a pandemonium out of bluegrass instruments like banjo and mandolin. With the 2011 release of All That We Know, the band caught on as a Warped Tour act and built a fanbase with heavy touring.

The band—Jeshua Marshall on bass, Ian Cook on guitar and lead vocals, Kirk Skatvold on mandolin and trumpet, and Andrew Carew on banjo and trombone—earned a larger and more devoted following with 2013's By The Lamplight and then toured even harder. They didn't really see the breaking point until they hit it.

"There was some doubt about whether we would make another album or keep going at all there, for a little bit. We just didn't know," Marshall says. "I moved to the Caribbean. The other fellows were all in Bend, following different endeavors, while I worked on a sailboat and served rum punch."

At first, the band wasn't on his mind at all, Marshall says, with immediate personal fixes taking priority.

So last summer, Marshall reached out to Cook, proposing that the band regroup and start working on a new album.

"That lit a fire under his ass and he started writing more songs solo and demo'ed them and sent them to me and that fire just grew," he says. "It was kind of a slow process to get everybody back, fully committed, but things just kept getting better and better. We're just so excited to get back out on the road and bring new music to people."

The band structured the forthcoming album, This Remedy, to be both a familiar return to the Flask sound and a way to offer some new elements.

"We initially approached it like we want to give the fans the best parts of what we do and we wanted to come at it from a positive frame of mind. We wanted to go with more of the punchy, fun, energetic stuff," Marshall says. "But there are a couple curveballs. We're maturing as musicians and want to add some complexity to the layers. We've got more horn parts going on in a lot of the songs. There are some more grooves going on, some Latin percussion on a couple songs. There's going to be a slow country-ish jam or two. That's when the fans are going to get something they haven't heard before."

The creative process behind This Remedy was a lot more positive for Larry and His Flask. The band recorded By The Lamplight right after the Marshall brothers' father had passed away, which cast a darker mood over the record's songs, something that wasn't fully apparent to the band at first.

At a tour stop in Detroit, a teenage girl interviewed the band for her school newspaper.

"She asked us if we sang about death on every song on purpose or if it was an accident. We didn't even realize that at the time and it took a teenage girl to point it out that we do sing a lot about death," Marshall says. "Everything has its time and place. Those are good songs. They do talk about death, but death is real and you can't hide from it. But now we're all just in a better mind frame. We can talk about the darkness a bit but dwell more on the beauty of life and be a positive outlet for people to enjoy."

The time spent away from music made Larry and His Flask realize even more that the band and its fans are important to each other.

"It's a very amazing thing and flattering thing to us that people think these songs are important and we need to respect that and keep going and not just give up. It's like giving up on your fans too. We can't be selfish in it and say we don't want to do it anymore," Marshall says. "We will probably never tour as much as we did, but we want to make a record every couple years and tour on it and put on an energetic fun show and have a great time."

Now, the band members are looking at making Larry and His Flask more of a long-term sustainable thing, and won't let themselves overdo it again.

"The whole (album) is based on the idea that it's a rebirth. The sun is coming up and it's a new day. This Remedy speaks to refreshing and starting over. It's the remedy to what was ailing us before."