A late night roamer called Cowboy, a Muslim and a Christian all meet in a headshop 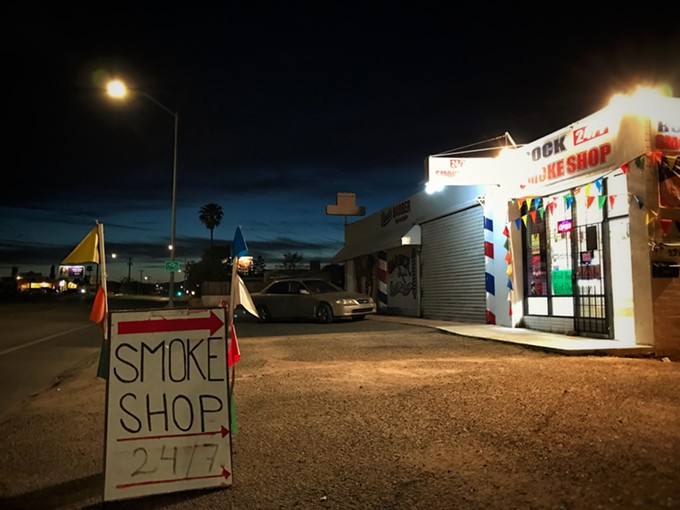 It's almost midnight and Cowboy rolls up on his fourth-hand Gary Fisher mountain bike, slides to a stop, hops off, leans the machine against the storefront window, and steps into the severely lit shop. He triggers the too-loud entrance beep, steps past the trio of Marilyn Monroe wall hangings, and is greeted like a trusted old pal.

We're in the newly opened, astutely titled Rock Smoke Shop, open 24 hours, seven days a week. The store launched a month ago, and its owner, Mohammed Kitama, and his corpulent sidekick Nael Polus, are an odd couple, a Kuwaiti-born Muslim and a Christian refugee from Iraq who met each other in Tucson a year and a half ago. They eschew Arabic in politeness to this monolingual, though Polus's English is negligible. The radio plays classic rock and the place is scented of freshly burned hookah tobacco, faintly exotic.

"I forgot his real name," Kitama says to me, "I now know him only as Cowboy."

Cowboy looks around in the center of the shop, its clean new walls and display cases lined with smoking paraphilia, legal stimulants, flavored cigars (the sweet blunts), hand-blown glass pipes and glimmering water bongs. His person is militarily organized: a holstered hatchet dangles from his backpack, and a portable CD player hangs around his neck, earbuds attached. A miniature stuffed Santa clings to a front loop of his black trousers whose belt buckle secures a fixed-blade knife with a pretty burnished handle. A white cowboy hat and black fingerless gloves complete the sartorial excellence. His teeth are perfect. His face and hat recall Bill Paxton, Dinky Winks in Spy Kids 2 and 3.

Cowboy hustled up coin earlier in the night but he's in Rock land to procure anything to enrich some smoking experience; rather, he purchases a packet of Brix (Quality Fragrances for Men), and in doing so relates a story of a woman who said he smelled wonderful the last time he wore it. He grins. "Maybe I can get lucky."

Now Cowboy has been homeless 19 years, and, yet, by miraculous fluke — evidenced by his teeth and shaven face — his world maybe isn't strictly defined by uncontrollable pursuits of the negative. He's made it livable, to a degree, yet it's obvious he’s seized by some enemy within.
Kitama treats Cowboy with respect, and he's known him long enough to learn others treat him like dirt. Kitama gives Cowboy work, though there's not much to give — fixing a toilet in back, helping with the sign out front, watching the store when a break for food is needed, that sort of thing. Tonight they converse about an electrical problem in the shop, Cowboy offers up theories and Kitama listens, and then it's figured out.

Before Cowboy arrived, the two gents were seated on folding chairs behind the cash register, facing each other across a short table and playing cards. Time long, patrons few. The previous customer was a weed-scented Latino whose unsteady focus was impressively held by Katima's persuasive sales pitches, which included hefty discounts on an array of smoking apparatus. But the kid only walked out with a couple bucks worth of Banana Smash cigarillos, after much internal deliberation and at least one trip out to his car to talk with his girlfriend.

Kitama and Polus are banking on the Rock Smoke Shop to succeed. It's just the two of them, 24/7. They work a lot.

"My friend," Kitama laughs, pointing to Polus, "is single. He has nothing else to do. So he works here." Later in the night, in a more serious tone, he says, "This man is my brother. He is Christian, I am Muslim. No matter. I trust him, in health, in money. I pick him to do business together."

There's a glut of Tucson smoke shops, and dubious, fly-by-night concerns, but this one, with its bare customer essentials, is one of pure entrepreneurial spirit, minus the ’tude common among newly minted, albeit somewhat myopic Tucson residents who relocate here calling the town "a blank slate," a place only to be improved upon. These particular gentlemen, who have no personal history here, are fascinated by the city's frayed charm, accept its troubled economics.

Customers are beginning to trickle in too, enough to perhaps give Kitama hope. Kitama reckons the store needs to net, at the minimum, between $5,000 and $6,000 a month to get by.

The desolate late-night offering sits on Grant's north side, near Treat, between Tucson Boulevard and Country Club Road. The white-washed edifice shares walls with the graffiti-logoed Classic's Barber Shop ("Shaves and Fades"), and is garishly lighted in and out, with colorful pennant string flags and handmade black-on-red placards that read, "We Open 24/7" and "For Med Night Press Bell," and red, white and blue block letters on the façade, "Rock 24/7 Smoke Shop."

Barriers drop, the suspicions, and the Kuwaiti-born Kitama "opens his heart," as he puts it, to explain the route from a comfortable career in Kuwait to a Grant Road headshop. Speaking family his melancholy green eyes lighten. He has three children (two sons and a daughter, the oldest is 11), and a wife to support, and they live in an $850-a-month apartment on the northwest side, chosen for the good public school and low-crime neighborhood.

His mother, dead now, taught English in Kuwait and Kitama's fairly articulate in it — there's a less-is-more edge that accents his strident observations of American life, and how he's a fan of business logic. He’s educated, and had built a life in Kuwait and Jordan, worked as an area manager (his territory covered the Middle East) for an oil wholesaler. He cashed it all in for, he says, the Arabic dream of living in America. "My boss said just take a vacation here, maybe three months. I was making $12,000 a month, had three cars and a boat. A boat is an extravagance you don't see there."

He arrived stateside his life's savings ($235,000), and in three years it's gone. Startups failed: A grocery store, a restaurant, headshop. He says the failures had much to do with a feud that erupted after a partner (a relative) cheated him. So his 80-year-old Jordanian father loaned him the Rock Shop startup cash, with the caveat to stay away from said relative. The 43-year-old has his pride, isn't exactly proud to involve his father.

Kitama can talk world politics, and does, stopping at Donald Trump. He shakes his head. In terms of leaders, Trump's just another trigger-happy narcissist in a long line of tyrants Kitama and, especially, Polus have seen, or endured, in epic war and tragedy, in the Middle East. Kitama isn't afraid of getting rounded up and shipped off from here. He can't help Islam extremists, or Yankee illiterates who make Muslim a dirty word. (He's been on the receiving end of ugly racism, the name calling, the shouts “to go back home,” etc.) He shrugs his shoulders; he's already lost so much. But not his children. They’re gaining wisdom of a foreign life, of cultures, Mexican and American. And Tucson's public schooling, compared to Jordan, is attractive. Because war-traumatized Assyrian refugees have poured into Jordan (whose population has nearly doubled to 9.5 million in the last 15 years) real estate is prime and entropy has set into the public-school system, and private schooling is priced out of reach. It's become too expensive to even survive, Kitama says.
His dad has a two-bedroom place in Jordan, and he has two siblings there, and if the Rock goes belly up that's likely where Kitama will end up. But it would be absolutely humiliating for this father and husband.

"To sell everything just for the plane tickets ... and then no work there, no guarantees," he says. After a pause, he adds, "It may still be an Arab dream to live in America, but it's cruel. If you lose your money here you're homeless, drunk or doing drugs, or you shoot yourself. There are no homeless in Arab countries.

"I've had two heart attacks since I've been here," he continues, pulling on a smoke. "It's the stress of the American life. I'm always thinking, always." He didn't bother with the hospital after the second heart attack. "Why? They put wires on and watch monitors. They take your blood. They give you results. They ask me questions. I pay almost $10,000 for questions. They tell you to stop smoking. This I know. I only started smoking like this in America, the stress. When I left hospital, it was $380 a month for 16 months to pay off. But I paid them."

Kitama has difficulty understanding certain American fundamentals, differences, and his own observations are exacting on crime, Yankee greed and, in particular, his belief women stay virginal to marriage. For example, he'd throw his own daughter out if she got pregnant out of wedlock. It's difficult to grasp, especially when Kitama is brought to tears talking about his young daughter Marwa — named after his mother — who couldn't understand his need to leave for work earlier tonight. How Marwa let his "tears get out."

"Why do you have to work?" Marwa had asked him earlier. "And why are you sad?"
"I call your name," he told her. "You are my everything. And when I call your name I think of my mother too."

America is only for his children. "Kids are a tree, the fruit. So, good education, good life — that is why I work so hard. Your kids are your future, and my kids will put me in my grave." Kitama adds, "I do my best. I am not a cheater. I believe in God. Everything's in God's hands. We trust ourselves and our customers. We are honest." His eyes narrow. "But if Trump touch my children, I make crime. I want my kids to be safe, that is all."

Polus nods along in kind. (Polus, the Marilyn Monroe fan, landed in America in 2007, spent time in San Diego and then Detroit, among other places. He ran a gas station in Tucson that went belly up. He has no children. He doesn't talk much.)

Later, Cowboy is standing outside the shop in the light the Rock throws to the middle of Grant. He talks of his living area — squatter's quarters a few miles away, a lucky predicament that allows him a certain amount of control in his life, which has brightened his world considerably. Better, he may be able to move into a space behind the Rock — there's an apartment back there that Polus rents — but it's questionable. No one knows if the Rock will be here in three months.
Cowboy, now smelling a bit sweeter, hops on his bike, earbuds attached, spins around and heads west on Grant Road into the late-night. Rolling toward some unknown place on the land, he disappears over a slight rise at the Grant Road Lumber sign.
© 2022 Tucson Weekly