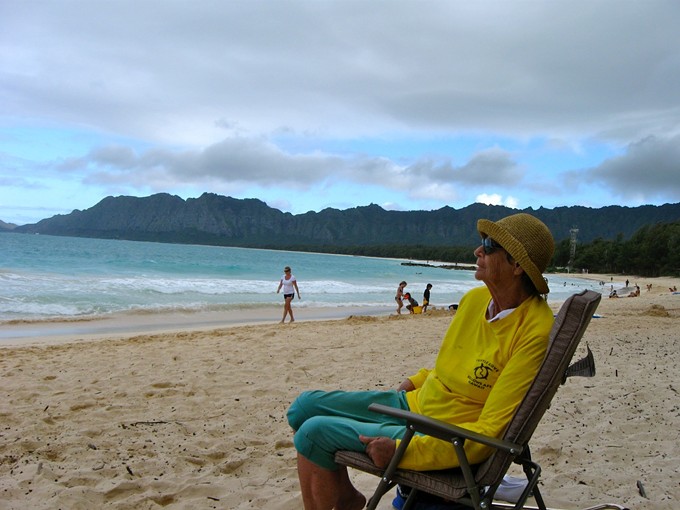 Some of my earliest memories revolve around spending time on beaches with my mom: Running along the edge of the waves on the Jersey shore, collecting seashells near my grandparents' homes in Long Island and building sandcastles at New York's Jones Beach.

Margaret Koch Tilton loved gathering up the family and taking us to the beach. She had seven kids born between 1949 and 1965, so it remains a mystery to me how she ever kept track of us along those sandy expanses. But we all survived, so she must have been doing something right.

Actually, she did plenty right over the course a long life filled with adventures she probably never dreamed of as a young girl growing up in New York City, in the Bayside neighborhood of Queens.

She met my dad when a cousin of hers brought him by to talk baseball with her father. Dad was just back from his service in WWII and must have cut a dashing figure. They fell in love and got married.

She dropped out of college at Cornell to bring up us kids. She was endlessly supportive of us; she instilled in me a love of reading and encouraged my efforts to write stories. I can still remember her helping me use construction paper to bind a book I wrote for second-grade class about Mike Bond, the cousin of James Bond who had his own gig as a spymaster out to save the world from some dastardly villain.

My mom's marriage to my dad didn't work out, but she remarried when I was in the third grade to Bob Tilton, a wonderful man who served in the U.S. Army. His job brought most of the family out west when he was assigned to a job at Fort Huachuca. Sadly, he had a major heart attack just a few years after they were married and he couldn't stay in the military, so we relocated to Tucson.

After we moved here, my mom—along with Bob—went back to school at the University of Arizona. She got a degree in early childhood education and dedicated herself to taking care of preschoolers. She ended up working well into her 80s at Outer Limits School, making sure that kids in her care got a solid start on life. It wasn't just babysitting for her—she was always working on lesson plans and field trips to enrich their lives.

Bob died in 1984 and my mom was devastated. But while working through her grief, she signed on with the Society of Military Widows—and before long, she was the group's national president. She ended up on trips to Washington, D.C., successfully lobbying lawmakers to change unfair policies that sometimes left the widows of our nation's veterans struggling to make end meets.

Nothing made my mom happier than having her family gathered around her dining room table. The seven kids were scattered around the country—everywhere from New England to Hawaii—so we didn't all get together that often. But many of us were in Tucson and our definition of family was pretty broad, so it it included various girlfriends, in-laws, acquaintances and, eventually, a whole bunch of grandchildren. She loved sitting at the head of the table, watching all the interactions between us—the talk, the laughter, the occasional arguments.

She was so proud of all of us. She loved talking about the stories I wrote in the paper and watching the shows I did on TV. And it was the same for all her other kids and grandkids—she always was able to fill me in on what everyone else in the family was doing when we got together. And once my kid Olivia came along, she found a big bucket of toys somewhere in her house and loved watching her play when I'd stop by for dinner on the way home from Olivia's school.

Mom also loved traveling, though she didn't get a chance to do much of that until we moved out to Arizona. While my stepdad was healthy, we did some long summer camping trips—to the Grand Canyon, Yosemite and Jackson Hole. She and Bob did some traveling after his heart trouble, taking a few long road trips across the USA. With the friends she met through her work with the military widows, she even made trips around Europe. They chattered about their late husbands and played bridge and just had a grand time.

And about 20 years ago, my mom starting making trips out to Hawaii to visit my brother Chris, who was then stationed at Pearl Harbor. I joined her when I could and, after Chris moved to the mainland, started traveling with her as often as possible. Thanks to her status as a military widow, she was able to get us rooms at the Hale Koa, a spectacular resort for members of the military on the beach in Waikiki.

Just last month, we made our final trip to Hawaii. Mom couldn't do as much as she used to be able to do, but we made sure to make it to the incomparable beach at Bellows Air Force Station, where mom helped Olivia build sandcastles while I braved the crashing waves. And we had a lovely dinner at House Without a Key. Olivia became entranced with the former Miss Hawaii who was dancing the hula onstage. I'll never forget the joy on my mom's face while she watched Olivia try to follow those hula moves.

Mom was a tough gal. She survived breast cancer back in the 1980s and bounced back from shattering her knee when she fell when she was walking back to her car after attending a legislative forum about the need for better childcare in Arizona about 10 years back.

But her luck ran out on the morning of Saturday, Aug. 27, when she suffered a massive stroke. By the time I got to the hospital, she had slipped into unconsciousness. The doctors said they might be able to prolong her life by drilling into her skull to remove some of the pooling blood, but she would have been paralyzed and bed-ridden. We all knew mom wouldn't have wanted to live that way, so we moved her to TMC's wonderful hospice facility, Peppi's House. She died, surrounded by family, in the wee hours of the next morning.

I'm crushed that Mom won't have a chance to meet her newest grandchild—the little girl my wife and I have on the way. Mom was so excited when we shared the news over dinner in Waikiki.

But I can assure you of this: We'll build plenty of sandcastles in her honor. Goodbye, Mom. I'll miss you forever and hear you in the waves.