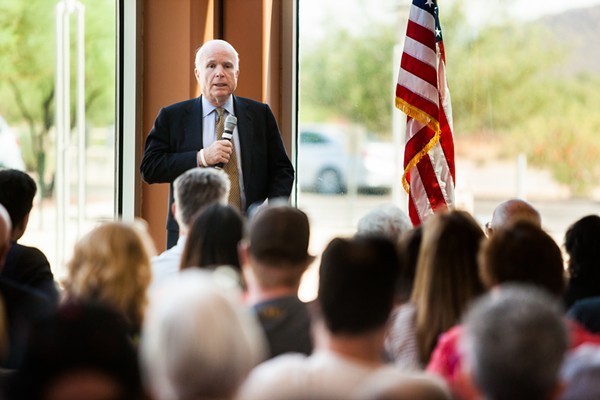 McCain and Kirkpatrick both raise $1.8 million in second quarter

In her uphill race to unseat U.S. Sen. John McCain, U.S. Rep. Ann Kirkpatrick had a titanic fundraising haul in the three months that ended on June 30.

Kirkpatrick raised more than $1.8 million and ended the quarter with $2.5 million in the bank.

"There's no doubt that Arizonans and folks all across this country are ready for new principled leadership in the U.S. Senate after 33 years of John McCain," said Kirkpatrick in a press release announcing the numbers. "Thousands of Americans have rallied behind our campaign because they're tired of the gridlock and the misguided priorities of Washington insiders like McCain. Thanks to their support, we're spreading our message of 'Arizona First' in every community and building the largest field operation to engage voters this state has ever seen."

Kirkpatrick is already putting that warchest to work with the launch of a $1.5 million media buy that includes a TV ad calling for term limits. The 30-second spot continues to underline Kirkpatrick's message that McCain has changed from the maverick persona he established in the 1990s.

McCain, who is also facing several candidates in next month's GOP primary, has plenty of money in his own campaign coffers to defend himself. Team McCain told the press it had raised $1.8 million in the quarter and had $5.8 million in the bank.

"I am proud of another strong fundraising quarter and am overwhelmed by the outpouring of support for my campaign," said McCain in a prepared statement. "My team and I have been traveling across the state, listening to voters and learning about the issues that they care about most. We have built the strongest field operation in Arizona, with hundreds of interns and volunteers covering the state. I look forward to continuing to share my message with voters during the campaign ahead."

Meanwhile, McCain made headlines again this week after he blamed President Barack Obama for the attack in Nice, France, that left 84 dead.

"As far as the tragedy in France is concerned, obviously this is an act of mayhem and despicable," McCain said during an appearance on Phoenix radio station KTAR on Friday, July 15. "But I also have to tell you—and our prayers are with the families, obviously, and the French people—but I also have to tell you, that as long as we have a leadership in this country, the president of the United States, who allowed this to happen, his policies are directly responsible for ISIS and ISIS is responsible for these attacks."

Kirkpatrick spokesman D.B. Mitchell said that "once again John McCain has chosen to make reckless Trump-like accusations for perceived political gain. McCain's desperate attempts to save his political career continue to prove just how much he's changed after 33 years in Washington."

With the end of another fundraising quarter, Congresswoman Martha McSally has continued raking in bucks like no one else in Southern Arizona.

"Martha McSally ran to bring effective, independent leadership to Southern Arizona, and that's exactly what she's done," said McSally campaign manager Weston McKee in a prepared statement. "She kept the A-10 flying, successfully fought for equal opportunity for female veterans and servicemembers, and secured funding for long-term transportation infrastructure projects. She's shown there's no one who will work harder to represent this district and the needs of Southern Arizonans, and that's why she continues to see overwhelming support."

McSally's haul is way more than either of the Democrats who are seeking to take on McSally this year. Former state lawmaker Matt Heinz brought in just over $207,000 over the three months, which is about what he's been raising each quarter. He had nearly $420,000 in the bank at the end of June.

Heinz said he was confident he'd have enough money to run a competitive campaign against McSally.

"Having no resources, of course, would be a problem, but I'm really, really proud of the campaign we've pulled together, and the message we're getting out already to the voters," Heinz said. "I'm looking forward to really going toe to toe and on the airwaves very soon. So we're going to be able to compete very well here in Southern Arizona."

Heinz also was named as a candidate in an "emerging race" last week by the Democratic Congressional Campaign Committee, but whether it will sink significant resources in the competitive-on-paper district remains to be seen.

Meanwhile, Democrat Victoria Steele continued to have dismal luck on the fundraising front. She reported raising less than $57,000 in the quarter and ended up with just $56,675 in the bank as of June 30.

"I don't want anyone to think that fundraising or the amount of money in one's bank account is the only thing that matters when it comes to choosing someone to be your representative," Steele said. "This campaign is a grassroots campaign and I reflect the people in my district. They know what it's like to struggle. They deserve to have somebody represent them who understands what it is like to struggle."

Zona Politics with Jim Nintzel airs at 8 a.m. Sunday on the CW Tucson, Channel 8 on Cox and Comcast and Channel 58 on Dish, DirecTV and broadcast. You can hear the show on KXCI, 91.3 FM, at 5 p.m. Sundays or watch it online at zonapolitics.com. This week's episode features the three Democrats vying for two seats representing Legislative District 9 in the Arizona House of Representatives: incumbent Reps. Randy Friese and Matt Kopec and challenger Pamela Powers Hannley.