Use Your Noodle: Fresco Pizzeria

Fresco is an alright, albeit nontraditional, pizza spot, but the pasta needs some work 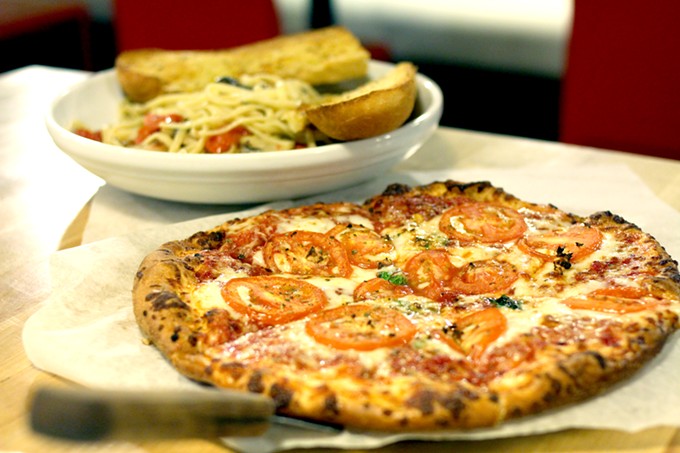 Heather Hoch
Fresco’s has a bunch of different pizza and pasta options to try.

The value of a neighborhood pizzeria becomes most clear on those busy nights when you just don't have time and/or energy to cook up dinner. Those nights when you just want to call in and order up some comfort food. For those living in the area of Speedway Boulevard and Country Club Road, Fresco, a pizzeria and "pastaria," can serve as just that.

Though the spot seems to function mostly as a takeout or delivery joint, the casual counter service eatery offers a bright dining area, decorated in green, white and red—a pretty standard color scheme for an Italian-inspired spot. Make no mistake, though: Fresco isn't here to serve up traditional Italian fare. With a menu that includes salads, pizza, pasta, calzones, subs and wings, the food is certainly Americanized with the pizza itself veering somewhere between chewy Detroit-style and thinner crust styles. It's almost a style of its own.

Starting with a salad, you'll be met with (if you order the dinner size, which are between $7 and $9) a truly massive metal bowl full of greens and more tossed in your chosen dressing—great for a family of three or more, but use your discretion here. While the greens themselves seem 'fresco' enough, some of the add-ons, which can include anything from artichoke hearts to olives, were definitely from a jar or can.

Other starters include a few different bread sticks (ranging from garlic bread to topped with mozz and pesto), a caprese salad, wings (bone-in and boneless) and tomato basil soup. The oven baked wings (seven for $7) come in your choice of BBQ, buffalo or plain sauce, though the sauce comes coated so lightly that it adds little flavor or spice to the meat. The chicken itself, though, is moist and tender and would stand out if the allegedly accompanying sauce helped it along a little more.

For those dining solo, the oven-baked subs and calzones are a good enough option to fill up for around $6 or $7. Six-inch subs all run at $6, filled with meatballs, Italian sausage, roasted chicken or roasted eggplant. The calzones are mostly just filled with cheese, with your choice of either ricotta filling or spinach with three different cheeses. You can opt to add meat or other pizza toppings for an up-charge, but the well-baked crust that surrounds whatever you decide goes inside is a decent representation of a calzone—not amazing, but it'll do for the price, which is $7.50 for a small. (It's not that small.)

Similarly, the pizza, which comes in 10, 12, 14 or 16-inch sizes, issues no real complaints. It's not the best pizza in town, surely, but it's satisfying enough and clearly freshly made. As previously mentioned, the crust isn't truly a thin crust, but it is crispy on the edges and chewy and airy on the inside. The tomato sauce is a little sweet, a little spicy and comes in generous portions if you opt for a red pie, though white, alfredo, enchilada, BBQ and pesto options are also available. As far as toppings, you can expect the usual suspects alongside some more unique picks, such as Jamaican jerk chicken, chorizo, Andouille sausage, goat horn peppers, cashews, roasted green chili and more. Gluten-free crust is also available.

If all of that has you feeling a bit overwhelmed, a safe place to start is the margherita ($10 for 10 inches). While it's certainly not the most traditional take on a margherita pizza, Fresco's take has the crust, sauce and cheese down, adding sliced tomato on top. Unfortunately, though, the pizza had only about two basil leaves, leaving much to be desired on the herb front.

Most of Fresco's menu is generally reasonably satisfying, though there is one section I'd recommend staying away from overall. That section is the second part of Fresco's moniker, and the fact the restaurant uses the made-up word "pastaria" should serve as a warning. It's not like the pasta offerings, which include ravioli, linguini [sic], lasagna, penne, stuffed shells and more, are completely terrible, but they are very bland. The pesto on the penne ($8.50) needs salt and some lemon juice or zest in a bad way and the truffle oil covered linguine ($9) is just a bowl of lightly oiled noodles with some tomatoes and mushrooms thrown in and a hint of truffle flavor. I can only imagine what'd be like if those mushrooms and tomatoes were roasted before being included to add some depth of flavor or if the sauce had any rosemary as advertized, but, instead, the most flavorful part of the dish was the garlic bread on the side. The noodles themselves seem of the box and boil variety—cooked alright, but nothing to write home about.

While Fresco didn't offer anything near a mind-blowing experience on any front, it really isn't a bad spot by any means. The service is really fast and friendly enough, and if you live nearby, it's certainly a better-than-chain option for local pizza delivery.