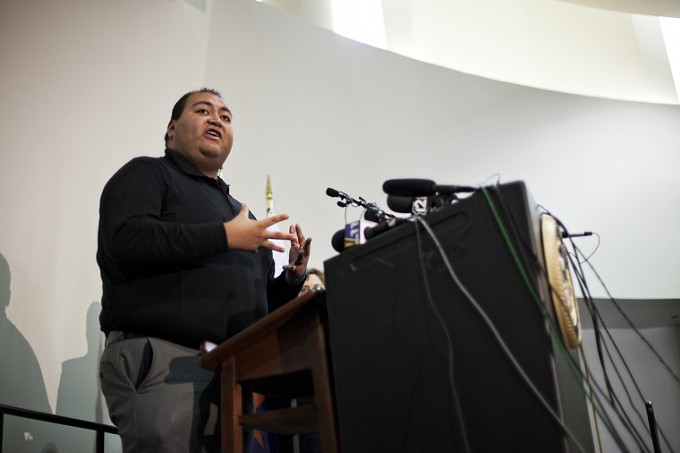 J.D. Fitzgerald
Daniel Hernandez Jr. is set to run for the Arizona Legislature.

Once again, U.S. Rep. McSally shows she has no equal when it comes to raising money

This week, the deadline for congressional candidates to show their fundraising hand finally arrived and we got a sense of what kind of wallet they're bringing to the 2016 campaign.

To no great surprise, Congressional District 2 Congresswoman Martha McSally continued to sweep up dollars like no one else. McSally reported raising more than $708,000 in the final three months of 2015. McSally is sitting on nearly $2 million as she prepares to fight her first reelection battle here in Southern Arizona.

The two Democrats who want to challenge McSally had wildly different quarters. Former state lawmaker Matt Heinz raised about $203,000 and had more than $305,000 in the bank as the year ended. By contrast, Victoria Steele, who gave up her seat a few weeks ago to concentrate on the congressional run, raised just over $44,000 and had just $43,867 in the bank.

But Team Steele tried to counter that narrative by citing a poll they commissioned by Public Policy Polling showing that they were in a better position to challenge McSally because in head-to-head matchups, Victoria was only losing to McSally by 9 percentage points (McSally 48 percent/Steele 39 percent), while Heinz was losing by 13 percentage points (McSally 48 percent/Heinz 35 percent).

"Recently released polling shows that Victoria is the strongest Democrat to take on Congresswoman McSally and we're confident that we'll have all the resources we need to run an effective, aggressive campaign," Steele campaign manager Keith Rosendahl told The Skinny.

Team Heinz campaign strategist Bill Scheel brushed aside the numbers as mostly meaningless because the election is still seven months away, although he did note that McSally's numbers remained below 50 percent, suggesting that she's vulnerable. An NRCC poll released last year also showed McSally had the support of less than 50 percent of the voters, which is often the a sign that an incumbent is vulnerable.

Those numbers aside, the national prognosticators are putting their money on McSally. Last week, Nathan Gonzalez of the Rothenberg & Gonzalez Political Report moved McSally from the "Lean Republican" column to the "Favored Republican" column. "Republican Rep. Martha McSally is proving to be a tremendous fundraiser and a very tough incumbent for Democrats to dislodge from this competitive district," noted Gonzalez.

CD2 remains a competitive district, roughly split between Democrats, Republicans and independents. McSally won her 2014 race against Democratic incumbent Ron Barber by just 167 votes, but she has been working overtime to build networks in the community to counter some of her more conservative votes, such as her multiple efforts to strip funding from Planned Parenthood or repeal the Affordable Care Act. And all that money she's raised will do two things: Attract money from outside groups on the GOP side and discourage outside groups from the Democratic side from playing in CD2 in the fall, unless they see a legit path to victory for the eventual Democratic nominee.

Legislative candidates are getting into gear

Some notes as we get caught up on the legislative campaign front:

In central Tucson's Legislative District 10, state Rep. Bruce Wheeler is retiring at the end of this term, so there's an open House seat. The latest entry into the race is UA law professor Kirsten Engel, who said she decided to run because Arizona "is facing a crisis in education; from K-12, to JTED, to community colleges, to our world-renowned universities. As the mom of a child in public school, as a lawyer and as a university teacher, I felt I could represent the interests of those most disadvantaged by the Republican legislature's failure to fund education adequately."

Also in the race for the two House seats: State Rep. Stefanie Mach, who wants to return for another term, and Courtney Frogge, a Dem activist who has served on the boards of the Arizona Women's Political Caucus and Planned Parenthood.

Meanwhile, Sunnyside School Board member Daniel Hernandez Jr. wants to run for the Arizona House of Representatives in Legislative District 2.

Hernandez, who was interning for former congresswoman Gabrielle Giffords when she was shot on Jan. 8, 2011, landed in the spotlight after he rushed to provide aid to Giffords before ambulances arrived.

He wrote about that experience and his life growing up as a gay Latino in a 2013 book, They Call Me Hero.

Hernandez has filed paperwork for his campaign with the Arizona Secretary of State and is expected to make a formal announcement this month.

Legislative District 2 runs along the Santa Cruz River and includes downtown Tucson, Green Valley, Sahuarita and Nogales. It leans Democratic—39 percent of voters are Dems, 23.5 percent are Republican and 37.5 percent are independent of the two major parties—but it is currently represented in the House by Democrat Rosanna Gabaldon and Republican Chris Ackerley.

Democrat Aaron Baumann, a law student at the University of Arizona, is also running for a House seat in the district.

The LD2 Senate seat is now held by Democrat Andrea Dalessandro, who has already filed her 2016 nominating papers with the state. She will face a challenge from Republican Shelley Kais, a businesswoman who made an unsuccessful run for Congress against Martha McSally in 2014.

Kais filed her paperwork to run for the Legislature last year.

"As a business woman, I know how important it is to have a highly-skilled workforce, a strong public education system, good paying jobs and communities that thrive," Kais said in a prepared statement.

Dalessandro, who ran in Republican-leaning districts before redistricting put her in LD2, said she respected Kais' decision to run against her.

"Since I ran in an uphill battle myself, I admire anyone who takes on such a challenge," Dalessandro said. "It will be hard to beat my name recognition, constituent service and my work ethic as a full-time senator."

In Pima County, attorney Jeff Rogers, the former chair of the Pima County Democratic Party, is making it official this week: He'll seek a seat as a Pima County justice of the peace.

Rogers, a frequent guest on Zona Politics with Jim Nintzel, is going after the Precinct 6 seat now held by the retiring Paul Simon.

Zona Politics with Jim Nintzel airs at 8 a.m. Sunday on the CW Tucson, Channel 8 on Cox and Comcast and Channel 58 on Dish, DirecTV and broadcast. You can hear the show on KXCI, 91.3 FM, at 5 p.m. Sundays or watch it online at zonapolitics.com. This week's guests include UA professor of geosciences Joellen Russell, who will discuss the impact of climate change on the oceans; author Kathryn Ferguson, who will discuss her book The Haunting of the Mexican Border; and author Margaret Regan, who will discuss her book, Detained and Deported: Stories of Immigrant Families Under Fire.