China Szechwan: The Other Menu 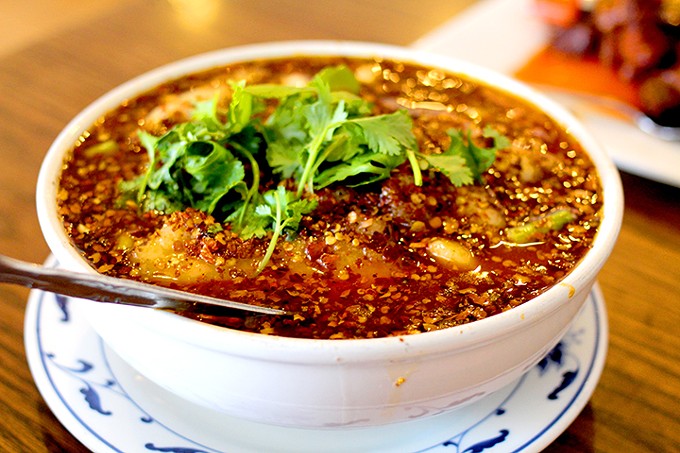 Heather hoch
The water boiled fish is the star of the Szechwan menu at China Szechwan.

I’m honestly torn at the idea of a restaurant having two menus, but I definitely understand the necessity—or what used to be hopefully. After all, I probably couldn’t get my dad to try a dish called “water boiled fish,” but I could at least try it myself while he opted for something like General Tso’s chicken (the same thing he always gets, regardless of where we go). He tells me stories of what he knew as Chinese food growing up in Calumet City, Illinois in the ‘60s and it’s just kind of, well, gross.

Since then, I’d venture to guess folks have become a little more adventurous, going further than the basic Panda Express-like offerings of syrupy sauces and greasy noodles and rice. However, the learning curve took a while—some people still don’t know there are distinct styles of Chinese cuisine—thus the need for one menu to satisfy more informed palates and another for those coming into the fold. Whether that pandering Americanized menu still needs to exist is up for debate, but it’s safe to say neither menu at China Szechwan is a dud. 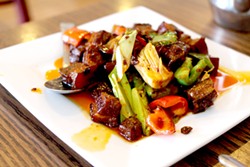 Heather Hoch
Braised pork belly will have you singing this spot’s praises.

In fact, China Szechwan has quickly become my favorite place to experiment with new dishes and get some familiar favorites. The first thing you should know about the Szechwan menu (or Sichuan cuisine in general) is that things are going to get really spicy. If you’re sensitive to heat, stick to the “regular” menu. However, the Szechwan menu is where this modest spot really shows its stuff.

Starting off, that water boiled fish dish ($9.95) is a surprising hit, giving way more than the name hints at. A chili flake filled broth offers a hellacious red base that manages to still have character, despite its intense heat. Nestled in the broth are bits of white fish that are best described with a heap of clichés such as “like butter” or “melts in your mouth.” They’re all true here and you probably won’t find a dish like this at other eateries in town.

A close second on that side menu is the braised pork ($10.95), which, again, doesn’t sound like much, but offers much more upon delivery. Hearty hunks of pork belly are tossed in, you guessed it, a chili sauce alongside some bell pepper and cabbage. Seared and chewy on the meat side and tender and indulgent on the fatty side, the pork belly is damn near perfectly cooked. 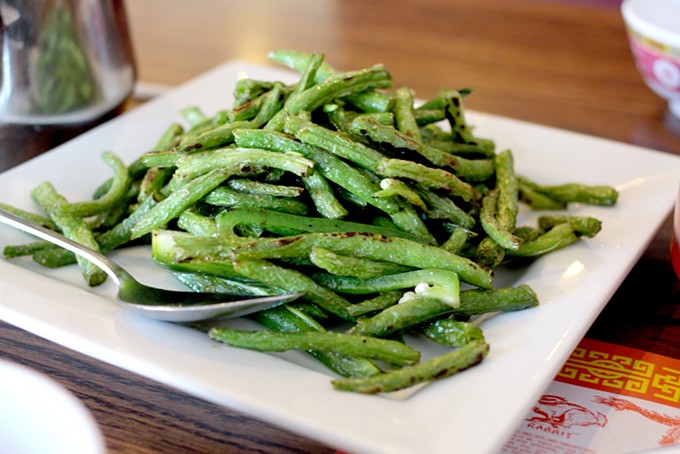 However, these are just two of the fantastic options offered on the Szechwan menu. Soft dan dan noodles with ground pork ($3.50), silky Mapo tofu ($7.95) and even a whole steamed bone-in tilapia ($11.95) make China Szechwan a cut above the rest. The sizzling shrimp ($12.95), which offers tender eggplant stuffed with sautéed shrimp, is served, like the name would suggest, popping and crackling on a black skillet. Even the crisp sautéed green beans with jalapeno ($7.95) are elevated, each dish seemingly getting equal attention in the eyes of the chef. 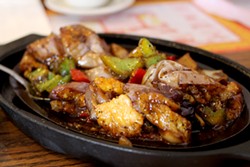 Heather Hoch
Sizzling shrimp with soft eggplant is a unique dish with tons of flavor.

Although dishes do take a while to come out, everything is well worth the wait—just don’t expect to pop in really quick during your lunch hour. Plus, the staff is kind and more than willing to help you navigate the Szechwan menu, should you be unfamiliar.

You certainly don’t have to venture far out of your comfort zone, whatever that might be, to find something delicious at China Szechwan. Back on the other menu, you’ll find the ubiquitous selection of Moo Shu, Peking, sweet and sour, Kung Pao, chop suey and (yes, dad) General Tsao’s (sic) there too. The appetizers showcase the usual suspects: pot stickers ($4.50), egg rolls ($2.25) and crab puffs ($3.25) alongside pan-fried scallion cake ($3.99), duck lettuce wraps ($5.95) and more. 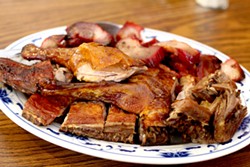 Roast duck and barbecue pork are tender and flavorful.

However, just because this menu has those more Americanized options, doesn’t mean the whole menu should be dismissed outright. Take, for instance, the roasted duck and barbecue pork platter ($15.95). Crispy-skinned duck will have you happily tearing meat from bone, while slices of bright red pork are a bit easier to graze on with a pair of chopsticks.

You’ll also want to check out any of the comforting noodle soups ($5.95-$6.99) on deck, including wonton, roasted duck, chicken, barbecue pork and beef tendon. Other standout soups include the sizzling rice, West Lake beef and tangy hot and sour soups.

Normally when I come across a menu the size of China Szechwan’s, which is both lettered and numbered, I assume that the restaurant has to sacrifice quality in some way to serve up all of those dishes. Well, venturing between both of China Szechwan’s full-sized menus threw that theory to the wind. There isn’t a single dish that I’ve tried at this haven for truly excellent Sichuan cuisine that I didn’t love. I’d order everything again and again and I look forward to trying more. 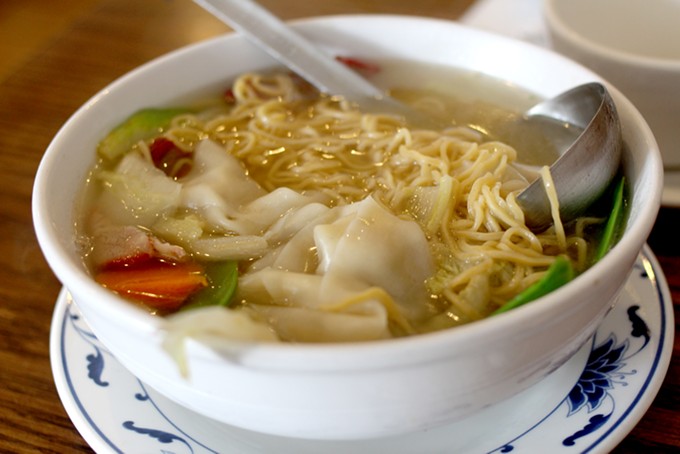 Heather Hoch
Wontons and noodles make this soup as fun to chew as it is to slurp.
© 2022 Tucson Weekly