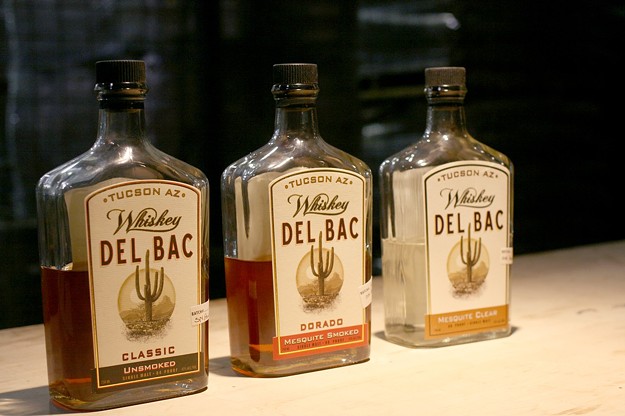 Heather Hoch
Tucson is great. Tucson does great things. This booze is one of those things.
I wasn't super pumped to have my browser window land on the Playboy page this morning, especially after widespread accusations from former live-in bunnies the ol' Hef treats his myriad of girlfriends like pets (or worse). However, like a newly married man who just can't quit the boob magazine, my defense is that I'm just reading it for the articles.

One article, specifically, gave a little bit of love to Tucson's very own distillery, Hamilton Distillers. The list of each of the 50 states' top distillers called out the locally-made mesquite-smoked to represent the Grand Canyon state:

Whiskey Del Bac Dorado
After years of building furniture out of native mesquite wood, Stephen Paul became obsessed with creating a single malt whisky using barley smoked with mesquite instead of Scotch’s traditional peat. So he taught himself distilling, bought a still and some local barley, and created Whiskey Del Bac. The Dorado version tempers the campfire-smoke flavor with a bit of barrel aging.