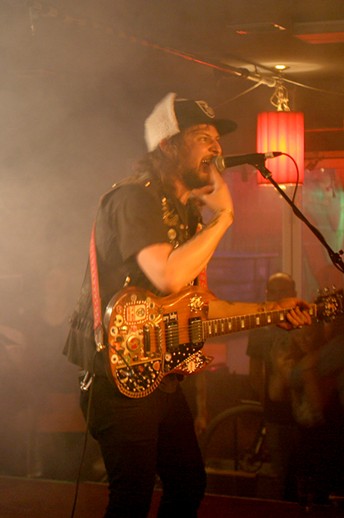 Hotel Congress/ Facebook
Prepare to get a little lawless this month at Dillinger Days.
You know when you go to a show and all of the planets seem to align. The band is having fun, the sound is dialed in, and the crowd actually cares. That shouldn't be as much of a rarity as it is, but, hey, as long as it still happens sometimes, I'm happy.

Anyways, last night's King Tuff show at Flycatcher was one such instance. The Sub Pop/Burger Records act is known for a seemingly contradictory blend of garage rock with a heavy dose of pop viability that caused Tuff to get some attention with the 2014 release of "Black Moon Spell." Lyrically, King Tuff music isn't concerned with complexity or depth—it's all about cheap hooks and having fun (in a good way).

Knowing that, it was actually really exciting to see frontman Kyle Thomas perform and subsequently blow away everything I thought the show would be. While I expected some solid head bobbing, butt shaking good times, Thomas' ability to bang out complicated licks between those catchy hooks took the show to another level.

The set list prominently featured songs off the new album like "Headbanger," "Beautiful Thing," and "Black Moon Spell." While a small group in front of the stage seemed to know the words to every song, the rest of the crowd still danced along unprovoked.

Heather Hoch
King Tuff at Flycatcher.
Several times throughout the set, bassist Magic Jake remarked on the crowd's participation, and it was pretty obvious the band was feeding off the energy in the room set in motion by The Rat and local opener Katterwaul. Not to worry if you missed last night's show though because the band has played the venue before when it was Plush and with response like that I have a feeling they'll be back again.