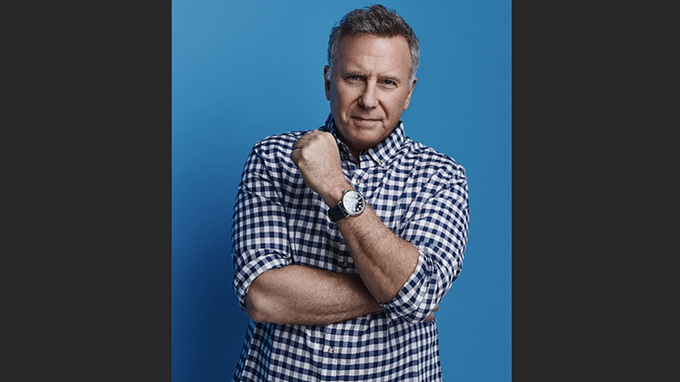 Dr. Sam Owens, in season two, episode four of “Stranger Things,” says, “For better or worse, I’m the schmuck they brought in to make things better.”

We’ve been stuck on the “Stranger Things” Wiki ever since we learned that actor, author, musician and Comedy Central top 100 standup comic Paul Reiser is coming to The Rialto Theatre on Saturday, Feb. 4. Tickets are at ticketmaster.com.

Reiser plays Owens. The winner of 12 primetime Emmys, it’s Netflix’s biggest series of all time. The show’s auteurs, The Duffer Brothers (Matt and John) created Owens’ character especially for Reiser. He’s performed in 19 episodes over the years, many in just the last season. The series will conclude in 2024 with the release of season five.

Reiser already had earned his bona fides as a veteran TV actor and writer. He co-wrote and co-starred with Helen Hunt in the ’90s sitcom “Mad About You.” Limning the joys and travails of a married life in New York City, the series ran from 1992 to 1999 and won all the awards: Emmy, Peabody and Golden Globe. All seven seasons are still on Amazon Prime.

He’s also won accolades and awards for a dozen other television shows and feature films he’s co-written, co-produced or performed supporting roles in, including “Diner,” “Alien,” “Whiplash,” “The Kominsky Method” and “Beverly Hills Cop” both I and II.

“I always tell people this, there are very few things that you can do in your 60s that are close to how you did them when you were 10, and standup is really one of the only ones,” he told Forbes.

Born and raised in New York City, Reiser was attracted to Greenwich Village clubs where he saw George Carlin, Robert Klein and David Steinberg among many others. He started performing at The Improv and Comic Strip during summer breaks from college.

Reiser’s noted that despite, or perhaps because of, all the potential DIY and virtual outlets today, it’s still as hard for comedians to hit the big time as it was when everyone was trying to get on the Johnny Carson show.

Carson hosted Reiser dozens of times and the two not only became friends but also came to share business interests. He said Carson specifically loved and supported comics. The hard part, he told Awardsdaily, was getting good enough to be on his show. “If you got Johnny’s stamp of approval, you were off and running,” he said.

Even in the virtual world, he said, “If you’re good, if you have something new to add to the conversation, people will find you.”

It’s not that Reiser denied that times have changed. Elsewhere in Awardsdaily he said, “Because of the moment we’re living in when the world is so fraught, the idea of having an evening where you just sit and laugh at things that are not complicated, things that are universal, things that all make us feel that we’re all going through the same thing, it’s such a relief.

“Can we just have some fun? Right now . . . (we’re) just going to talk about your family, my family, my incompetence, your incompetence, how we’re getting older, and then let’s go home. Comedy has an extra appeal to it that I don’t remember being there years ago.”

And as for the impact of “cancel culture” he told the New York Times, “I never understand people who say, ‘You couldn’t make that joke anymore. I go, ‘Why would you want to? How much do you want to make a joke?’ It’s kind of not cool and insensitive.”

It’s almost as if he’s been brought in to make things better.

Growing up in a migrant family of nine and living in a gang-infested LA neighborhood, Felipe Esparza survived by his sense of humor. He was attracted to comedy by an old Bill Cosby record, but he had no idea it would one day make him a winner of NBC’s “Last Comic Standing.”

For years he had opened for popular bilingual comics like Gabriel Iglesias and Paul Rodriguez. When he finally struck out on his own, his commitment carried him through 16 years of privation until his big break on NBC. That win was his ticket not only to sold-out comedy venues across the country but also to acting opportunities for movies and TV.

He has since produced an hour-long special, “They’re Not Gonna Laugh at You,” on Netflix, and another called “Translate This” for HBO. In 2020 Netflix released both English and Spanish versions of his special “Bad Decisions”/ “Malas Decisiones.”