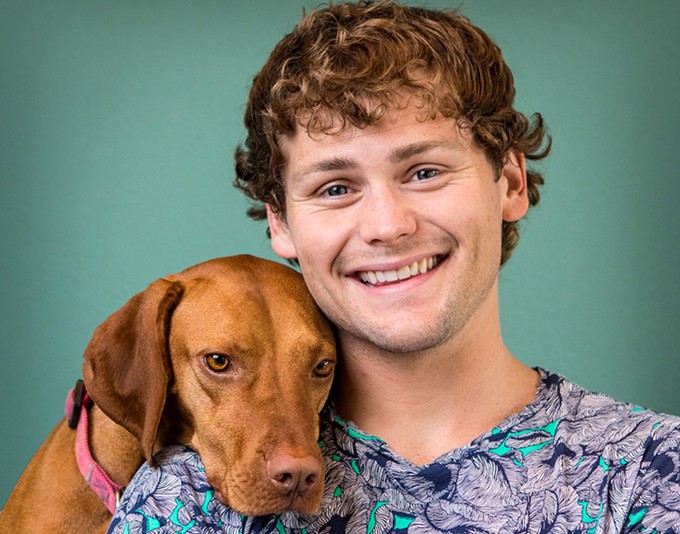 Drew Lynch keeps reinventing himself. His latest live show reflects his commitment to melding the diverse interests of the more than two million fans he’s cultivated as a content creator, and attracting new fans to his quirky, high-energy humor.

It was Howie Mandel who used his one “Golden Buzzer” of season 10 (2015) to grant Drew Lynch entry into the next round of “America’s Got Talent.”

Lynch ultimately came in second, but his career was made. He went on to garner more than 2 million YouTube subscribers for his comedy sketches, collaborations with major brands and two popular series — one comedically relating his struggles in the wake of a debilitating accident, and the other, in both a vlog and an animated series, about his therapy dog, Stella. She plays his therapist.

Lynch’s 2019 return appearance on “America’s Got Talent: The Champions” scored more than a million YouTube views its first week.

Since then, he’s also won a substantial following for his standup comedy content. He released his first hour-long comedy special in 2021. Titled “Concussed,” the show is somewhat darker than his previous content, (he refers to it as more “mature”). He explores the comedy potential in his stutter, but also the me-too movement, Jesus, gender, police and similar factors haunting the zeitgeist of the COVID-19 lockdown.

He’s now touring an all-new set, one crafted to leave no funny bone un-tickled, and he brings it to The Rialto Theatre at 8 p.m. Thursday, Dec. 1. Tickets start at $32 at rialtotheatre.com.

Lynch has, in spades, two qualities most likely to lead to success on the stage: high energy and relentless ambition. He also has a handy trait for comedy: a dent-proof light-heartedness that can find humor even in adversity.

So it’s hard to resist imagining how different his career path might be had a wayward softball not taken his voice at the age of 19.

He had been playing a pickup game with fellow employees of a Burbank comedy club. “I remember feeling just devastated,” he said, “because that week I had callbacks lined up for Disney and for “Mad Men” and for “How I Met Your Mother.” I had meetings with casting directors. I felt like I was on the cusp of booking some nice stuff.”

How did he feel about suddenly being disabled? He fell quiet at the question. “I struggled with it, and I struggled with it immensely before realizing that I was going to have to do something to get out of it. I had to feel I could get that control back again.

“I like to be in control all the time. But before that, it was heavy, heavy stages of grief and anger.” He imagined he was always being judged and found wanting. He felt abandoned by agents and managers.

Lynch had been a wunderkind almost since the first moment he figured out a) that he wasn’t cut out for sports and b) that made him different. He did love performing but rarely found an outlet for it, so when his family moved to Las Vegas, they had delivered him to performing-arts heaven. He dove into his middle school’s acting curriculum. He read plays constantly. Then he breezed through an audition for an elite performing-arts high school. After high school, and still underage, he moved to LA to pursue an acting career.

He eventually got a job in the bar because working nights made him available for daytime auditions and acting gigs. He said he only joined the bar’s pick-up softball team because they needed people who knew how to play. “It was only the second or third game,” he said, when the softball hit his throat at full speed and delivered the injury that left him stuttering.

After much rigorous speech therapy, he reined in the stutter so that it now surfaces only barely and very infrequently. At those times, Lynch has a laughable cover at the ready.

But after the injury he pivoted, or we might say hurtled, from acting to stand-up comedy. “I had heard from a friend that if you really want to get seasoned as a comedian, and you want to get on television, you need to do 500 sets in a year. So that year (2014) I did about 590 shows, multiple sets a day for every day.

“Two months later, I got to do ‘America’s Got Talent.’ It wasn’t even that they saw me somewhere. It was just that I felt so comfortable going up pretty much in any environment that I felt like I was ready.

“I went to an open casting call the day after Valentine’s Day. I remember because I was super hungover. I got there at 5:30 a.m. and was there for 12 hours. I went to one room and one producer saw me.” Chutzpah wins the day and rescues the career.

But like everything else, Lynch’s then-thriving career took a nosedive with COVID-19. Venues were closed and no new productions were being made. Ever resourceful and committed, Lynch doubled down into cyberspace, churning out YouTube videos, building an audience and ultimately delivering that first hour-long special.

But “Concussed” was a product of its time. Lynch says his new, live show features a new attitude and all new material. “So many things happened, and (2021) felt like such a serious time.

“When I first realized that I was talking about one or two things that were pretty controversial,” Lynch said, “as I was trying to write, it became clear there were going to be things that maybe put people in an uncomfortable spot or maybe triggered them.” (While that’s true, it should be noted that he always provides comic relief in the punchlines.)

“I think rather than shying away from it I made it the whole special. It was a lot of failing! But it’s really cool to know that in a year since that came out, the hour that we’re on tour with now is all different. It feels more buoyant.”

“Buoyant” is Lynch’s natural state. He all but vibrates high energy. He moves around for emphasis, and he animates his exceptional character work. He also talks quickly and compactly. His economy of words, he said, owes to his background of seeing things as scripted dialogues, and to the speech therapy that helped resolve his stuttering.

The somewhat darker “Concussed” reveals a deeper, more textured comedy sensibility. “That special,” he said, “was very much about just standing still, kind of in one place.” And weren’t we all.

More about comedy this week