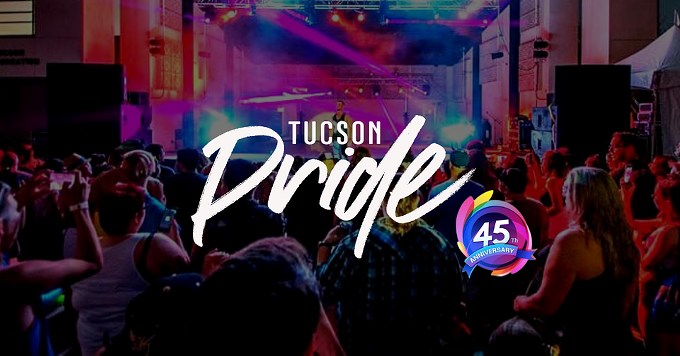 For 45 years, Tucson Pride has hosted the Annual Pride in the Desert festivities, opening with the Pride Parade and following with a Pride in the Park Festival.

The festival returns this year after being virtual in 2020 and postponed in 2021 because of the COVID-19 pandemic.

“This will be our year of coming out of the pandemic and getting everyone back together again,” he said.

This year’s parade is 7:30 to 8:30 p.m. Friday, Sept. 30, in Downtown Tucson and Armory Park. The Pride Festival begins at noon Saturday, Oct. 1, at the Georges DeMeester Outdoor Performance Center at Reid Park and runs until 10 p.m.

The parade is returning to the evening time rather than Saturday morning so it is cooler. It moved Downtown, in part, because they outgrew the staging area. So far, the parade has 30 groups registered as walkers or with floats. Some groups have upward of 100 participants.

“People get to be themselves, they get to be visible in the community,” Myers said. “With being Downtown, there are a lot of different places people can go after the parade and make a night of it.”

Going forward, Myers said they hope to have a block party alongside the parade, but this year inflated costs from the pandemic undercut the feasibility and cost-effectiveness of such an event.

Tickets to the Saturday festival are $15 general admission and $5 for young adults ages 13 to 17. Valid ID is required for young adult tickets. Children under 13 are free.

This year’s festival has more than 100 exhibitors, vendors and sponsors coming out from across the community. Among them are organizations and nonprofits, as well as the health department who will be giving COVID-19 and monkeypox vaccines shots. Other vendors include small, locally owned merchants that are selling rainbow and other merchandise. There are also artists who will be exhibiting and selling their work.

Headliners to this year’s event include Velo, Carly Pearl and Crystal Waters. Velo is a recording artist native to Tucson who has done music videos with RuPaul’s Drag Race.

“There’s going to be drag talent and dance, just about anything you can imagine in terms of entertainment,” Myers said.

The event is expected to attract 5,000 attendees with around 100 local vendors and sponsors. In addition to the headliners, there will be DJs, guest drag queens, food trucks, and a full bar.

On Sunday, events wrap up with a Tucson Pride Drag Brunch from 10 a.m. to 2 p.m. at HighWire, 14 S. Arizona Avenue. The brunch buffet ($39.99) features prime rib, a ham carving station, custom omelets, eggs Benedict, biscuits and gravy and a pastry and desert bar. Sponsors Smirnoff and Jack Daniels will offer specials. While all ages are welcome, those under 21 must be accompanied by a parent or guardian.

The drag brunch was an event started in 2019 by HighWire, which is a sponsor. Performances this year will be by Allonna Dee, Trouble and Onika Grande.

“It was really popular,” Myers said. “It was drag entertainment. They had really good food catered in. Obviously, the typical brunch drinks, mimosas and stuff like that. HighWire recently expanded so they have their own kitchen and brunch menu now. I think a lot of people will enjoy coming in to see the entertainers, but I think HighWire has a lot to offer in terms of really delicious food.”

Tucson Pride, the oldest LGBT+ organization in Arizona, is committed to outreach, support and advocacy. The all-volunteer nonprofit supports LGBTQ+ organizations throughout Southern Arizona through donations, volunteering and participating in community events.

The organization’s official name is the Tucson Lesbian and Gay Alliance and it promotes cultural, educational and recreational events for the LGBTQ+ community in Tucson.

Tucson Pride was formed a year after an openly gay man visiting Tucson was murdered after leaving the Stonewall Tavern in June 1976. A group of 13 teens aged 15 to 17 began harassing him with four of them assaulting him, including a punch to the neck that caused hemorrhaging. He died from brain injuries.

The four teens were charged with first degree murder, but the judge reduced it to involuntary manslaughter and then allowed them to be tried as juveniles. Their eventual sentence was probation until they turned 21, what most considered a “slap on the wrist.”

The outraged LGBT community formed Tucson Pride and their work led to some of the earliest LGBT anti-discrimination legislation in the U.S. Tucson Pride’s first community event was the Gay Pride Festival & Memorial Picnic which was held in Himmel Park on June 26, 1977.

Since that time, the event has grown and now thousands of people are expected to turn out with colorful floats, many performers and a sea of rainbows as attendees celebrate their community.

Myers said he hopes the numbers will grow this year, though it is hard to predict after two years away.

“We’re hoping that people are anxious to get out and that number will go up,” Myers said.

The event provides a platform for many people and organizations, Myers said, to come to the event and get their mission out to the community and share the services they provide, with services ranging from HIV/AIDS assistance to youth services. It also gives local entertainers a chance to showcase their talent.

“It’s a safe space for our community to come together,” Myers said. “They get to really have that safe space once a year. It doesn’t matter where they fall within the community, it’s an event that appeals to everybody and they can just come out and be themselves for the day.”