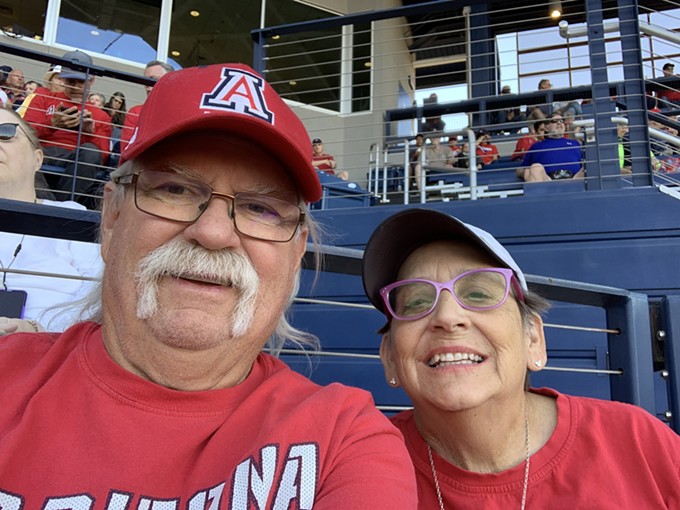 When Debi Hall was diagnosed with Alzheimer’s disease in March 2020, she wanted to end it all.

Hearing those words, her husband, Mark, called the Alzheimer’s Association’s 24/7 Helpline, whose staff immediately contacted her neurologist. Debi was prescribed an antidepressant that lifted her mood.

“It took her probably a year before she just came to accept it,” Mark said.

“One of the things I kept telling her was, ‘I’m not quitting on you and you’re not quitting on me.’ I told her to promise me to be the best Debi that she can be. That’s it. Don’t worry about anything else. It took a while to tell our friends what was going on.”

The Tucson couple volunteers with the Walk to End Alzheimer’s set for Saturday, Oct. 22, at Reid Park, 900 S. Randolph Way. Walkers have a choice of 1- or 3-mile routes.

“We were one of the largest in-person events that the city of Tucson welcomed last year after the pandemic. We did do a walk-at-home opportunity during 2020 and that was phenomenal, but nothing like the in-person event.

“Arizona has the fastest growth rate in the country,” Hartford said. “It’s the epicenter of the crisis. If you stand in a room and ask how many people are impacted by Alzheimer’s, 90% of the room will raise their hand.”

Hartford said his organization offers free programs and services throughout Southern Arizona and Pima County, including the helpline with a clinical social worker staff that speaks 200 languages between them.

“They’re there just to vent or for access to local resources,” Hartford said.

“They’re available 24 hours a day. That’s a big touchpoint for us. People attend our education programs throughout the area, too, whether it’s at libraries, churches or places of business. Our business partners have lunch and learn programs for employees, too. The education programs are core to what we do.”

Key to the programs is the list of warning signs, which include increased memory loss and confusion; inability to learn new things; difficulty with language and problems with reading, writing and working with numbers; difficulty organizing thoughts and thinking logically; shortened attention span and problems coping with new situations, according to the National Institutes of Health’s National Institute on Aging.

“We need people to stay socially engaged and not as isolated. That’s really important. Whatever the disease, people just can’t do it alone. Even if they’re the only ones providing that care, they’re not the only one going through that. Support groups and outings do provide a level of comfort.”

Part of the activities, too, is El Tour de Tucson set for Saturday, Nov. 19. The Alzheimer’s Association is a beneficiary of the bicycling event. For information, visit eltourdetucson.org.

Debi was diagnosed at age 67, but Mark witnessed symptoms — unknowingly — previously. He was at a baseball game while his wife went to a sewing class at Cathey’s Sewing and Vacuum.

“I got a call saying she was lost,” Mark recalled. “I figured she made a wrong turn because it was dark and, a lot of time, she uses the mountains for directions.”

He knew something was wrong, though, when they played cards.

“Another time, we played cards, rummy 500, and she would always beat the pants off of me. We were camping at Big Lake and playing cards. She couldn’t get the suits straight. She would confuse diamonds and hearts. She couldn’t figure out sequential numbers. Those were probably the biggest clues.

The two visited their primary care physician in March 2020 for their annual checkups. The doctor gave Debi a rudimentary dementia test and she didn’t fare well.

“When she told her she had signs of dementia, she flipped out and fell apart,” Mark recalled. “They gave her Aricept (donepezil) right then and there. It was really hard. She was a nurse for 40 years. She knew what this meant.

“The first year was really hard because we kept getting our hopes up that it was something else. She had a CT done and they thought they saw high pressure in the spinal cord.”

The two saw a neurologist, who performed a lumbar puncture and MRI, but the pressure was fine.

“She went to a neuropsychologist, and it tanked her for about a week,” Mark said. “They were scheduled to talk for four hours, but after three hours, she came out just crying. She couldn’t answer the questions. She didn’t care after a while. She just started answering so she could get out of there.”

A retired nurse, Debi started having headaches, so she went to a neuro ophthalmologist, that ruled out any eye issues. At the end of 2020, a neurologist at Banner Alzheimer’s Institute ordered a PET scan, which detects early signs of cancer, heart disease and brain disorders.

That confirmed the Alzheimer’s diagnosis.

“Since then, we’ve been trying to find voices who will talk about Alzheimer’s because, on TV, you see ads for cancer or Parkinson’s or cystic fibrosis. I don’t know why there’s this stigma with Alzheimer’s. It’s not part of the daily conversation like other diseases.

“I do not want to diminish what everybody’s doing for other things. What they’re doing is absolutely fantastic. But patients sit down and hear devastating news, ‘I’m sorry. You have cancer.’ At least you’re able to step back, take a deep breath and hear the physician say, ‘Let me get you with so and so to determine what course of treatment we have for you.’

“When you hear you have Alzheimer’s, you don’t get to take a breath. It’s a death sentence. There are no treatments. There’s not a cure. There’s not a physician across from you saying, ‘Now that this is out, let’s get you with a specialist.’ There’s never going to be that conversation until we find a treatment or cure for this. That’s what differentiates Alzheimer’s from all these other diseases. You don’t have that secondary conversation. It’s just they want you to come back in six months to see how you’re doing.”

After the diagnosis, the couple chose to take a lot of photos and create new memories. Mark and Debi traveled to Hawaii in 2019 before her diagnosis and “she had a blast.”

“She said she wanted to come back,” Mark said. “I said we could afford to go every other year. Then she had the diagnosis. I told her I would do whatever it took to take her back every year. We went back earlier this year.

“We also go camping all the time, picnic at Mount Lemmon. We try to get out and do as many things as she can.”

Born at St. Mary’s Hospital and a graduate of Sahuaro High School, Debi is a caring person, according to Mark, and that hasn’t changed.

“With the diagnosis and this thing progressing as fast as it’s progressing, she has remained that way,” Mark said.

“When she was first diagnosed, she was doing dresses for girls around the world. I don’t know how many she did, but then she couldn’t do that. So, we teamed up with Mending Souls and we started doing masks during the pandemic. We did 1,500. She got to the point where she couldn’t do that. She started doing lap blankets and baby blankets. She did 250 of those. Now it’s to the point where she can’t do it by herself. I sit down with her, and we do it together.”

Yearning to still be active, Debi volunteers with the Alzheimer’s Association’s walk committee.

“She wants to get out there and help and raise funds so sometime in the future people won’t have to go through what she goes through,” Mark said.

WHAT: Walk to End Alzheimer’s

COST: No registration fee, however, donations are suggested