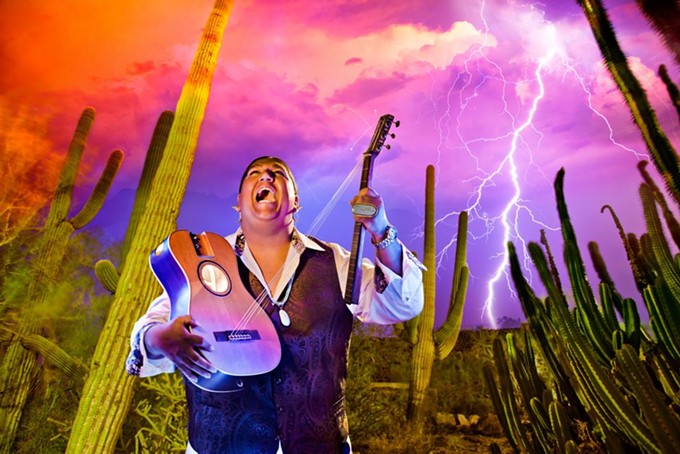 (Photo courtesy of Gabriel Ayala)
Gabriel Ayala is keeping busy. The maestro is designing ledger art, jewelry and tattoos while preparing for his album release this November.

Gabriel Ayala has been wowing crowds with his masterful guitarwork for decades. Graduating from the University of Arizona with a master’s in music performance in 1997, the Yaqui maestro has been honing his craft as a performer and composer since.

Ayala is best known for coining “JazzMenco” — a fusion of flamenco and jazz that he plays in solo and band formations. Although, his style is broad-spanning and broaches the worlds of classical and tango performance.

This broad musical identity has made Ayala a choice performer at the John F. Kennedy Center for the Performing Arts and has even gained him audience with Pope Benedict XVI, whom he played for at the canonization of Blessed Keteri Tekakwitha in Rome. He has shared the stage with the Temptations, Richie Havens and more.

These days, the world-touring guitarist is also revered for art of other mediums. Following the height of the pandemic, Ayala’s self-expression has flourished to encompass ledger art, jewelry-making, and more. Tattooing is the latest art form to enter his portfolio.

“For over 18 months during the pandemic, I had almost nothing booked and it sucked,” Ayala reflected. “But it gave me a lot of time to create new music, new artwork, and to teach myself to cut shells and make earrings and practice tattooing.”

Ayala said, “I just put it on there on Facebook: ‘If I was to tattoo, who would let me tattoo them?’ The response was pretty overwhelming, and I decided to get serious about taking this endeavor on.”

His multidimensional pursuit of various art mediums is inspired by a longtime ideology of self-improvement. “I should always be progressing. I’m always practicing. I need to make sure that I’m going past my own expectations.

“I’ve always hated to live within stereotypes, both as an indigenous person but also as a musician. Just because I do music doesn’t mean I can’t create other art, as well. Now I’m getting asked to be a featured musician and a featured visual artist at the same festival. There’s no reason why you can’t do both.”

Long past are the dog days of canceled bookings for Ayala. Since venues have opened again and festivals are back on the calendar, the maestro has been touring internationally like “old times.”

Here in Tucson, Ayala will be playing with the Tucson Pops Orchestra as part of its “Music Under the Stars” series. On Sunday, Sept. 25, he takes the stage at Reid Park’s DeMeester Outdoor Performance Center along with Jeffrey Haskell, Katherine Byrnes, and the orchestra now led by musician and educator Khris Dodge. He will present an original composition at the family-friendly event, which starts at 7 p.m.

He will also have an opportunity to present his music and other artwork at Tucson Meet Yourself. He plays the Alameda Stage at 8:30 p.m. Saturday, Oct. 8, and will be selling wares at a vendor tent on all three days of the festival.

Ayala is also looking forward to kicking off the New Year with a performance spotlight with the Tucson Jazz Society in January.

Having just returned from a show with Keith Secola at Indianapolis’ Eiteljorg Museum, Ayala now sets his sights on Canada for his next set of touring shows. The maestro is as well-respected across borders as he is in the States for his work as an all-around indigenous renegade.

Besides his award-winning guitar performances and foray into new art mediums, Ayala is a revered activist and educator. He is a long-time critic of the federal government’s encroachment of Native land for pipeline projects, for instance.

During the Dakota Access Pipeline protests, Ayala not only joined activists at Standing Rock but used his shows locally and abroad as an educational moment for fans. Accentuating the importance of accessibility to clean water, Ayala morphs this message of protest back into an overarching philosophy of respect — toward his culture, and towards all people.

“It’s better to use the stage for those that maybe don’t have a voice, or don’t know how to use it,” Ayala says. “I try to be an advocate for that.”

Back at home, Ayala is preparing for the release of an all-new album: the aptly titled “Quarantine.” Encompassing compositions written during the pandemic, “Quarantine” is a reflection on positive moments spent with family, friends, and fans during lockdown.

“It’s a soundtrack to my pandemic story,” Ayala stated. “Everything’s in it. It was so experimental! You’ve got some blues in there, some jazz, some ‘JazzMenco,’ some classical. There’s everything.”

“The titles of each composition were based on the emotions I felt as I was writing them, or what I’d felt through other people experiencing their emotions during this complex time.”

Many of the compositions were initially improvised — a result of Ayala’s dedicated concert streams during the pandemic’s height. Every Monday night for months on end, Ayala would livestream performances and interact with his fans online. Ultimately, he gave over 150 free concerts throughout the pandemic’s initial course.

Ayala recalled, “I would improvise during every concert. I’d be like, ‘Hey, I’m going to play something in the key of whatever and I would talk with the audience during my composition. I’d say, ‘What do you guys think about this melody?’ And there’d be thumbs up on the screen, and people sharing their input, and I’d say, ‘Alright, let’s roll with this.’”

“It was such a different experience, trying to connect with an audience that wasn’t physically there. But they were watching, and they were still interacting.”

“Quarantine” os Ayala’s ninth album since 2008, and the first to encompass each of his varying musical styles in a single CD. It is set to release sometime towards the end of this November.

Gabriel Ayala is a musician, composer, educator, activist, ledger artist, jeweler and tattooist. Between international tour dates, recording his next album, and creating his next piece of art, Ayala is consciously working to expand his world with his next great artistic pursuit.

At the center of it all is his trademark catchphrase. Encompassing Ayala’s philosophy of respect and determination is his main go-to, whether he is educating young people or closing out a concert: “Love your children, honor your elders, and respect your women.”