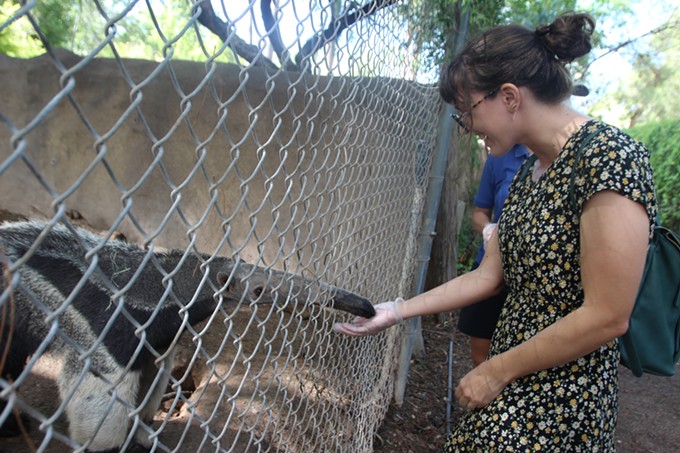 Some people might think it’s ridiculous to be afraid of anteaters.

To those people, I would first say, “’Well, have you ever seen how weird an anteater looks?” and then “Yes, I agree it’s ridiculous.”

My phobia of anteaters started in high school, when I saw a video of a pet tamandua anteater walking on its hind legs toward the camera. Its arms were outstretched, and it looked oddly human, and also like it was coming to get me. When I learned about giant anteaters, which are even weirder looking, forget it. As Jennifer Stoddard, education supervisor at the Reid Park Zoo, put it to me, “You look at an anteater and it’s like, ‘Why? Who put you together?’”

About 6 to 7 feet long, giant anteaters have tiny eyes and ears perched on a footlong snout, which itself is attached to a beefy neck and body. Their tails grow long hair that makes them look absurd and disproportionate, like if you tied an industrial-sized broom to a dog’s tail. Their 2-foot tongues can move in and out 160 times per minute while eating.

Sometimes, of course, things are just weird, and that’s enough to give you the heebie jeebies. You know, like if you learn about the process behind how cheese is made, or see a picture of an infant with a photoshopped set of adult teeth. But anteaters really can be dangerous because of their claws, which are several inches long and are very scary. They use these claws to fend off jaguars. And, I am not kidding, to kill humans. Not often! There are just a few documented cases of giant anteaters killing humans, and most were hunters who were injuring or antagonizing the animals. But you can imagine learning this didn’t exactly make me feel less afraid.

Of course, I don’t encounter many anteaters — giant or otherwise — in my daily life, so this phobia is not something I’m too worried about. It’s sort of a fun fact to bring up at parties, or to laugh over with friends. But then, my friend Chelo, a former Tucson Weekly staffer who now works for the Reid Park Zoo, said she might be able to help set up an opportunity for me to face my fear and feed an anteater.

Sounded terrible. I had to do it.

So, one morning last week, I headed to the zoo to face my fear.

Blessedly, my appointment is not with Zola, but with Nico, who is smaller and would, I presume, have a more difficult time mauling me. We approach the back side of the anteater habitat while Stoddard, my guide for this experience, calls out to Nico so he can stick his long nose through the chain link fence and eat from my gloved hand. He ambles over, Stoddard passes me a handful of mealworms and it’s the moment of truth. I squeal.

Nico’s tongue is different than I expected. I’d expected the flatness of a measuring tape, but it’s rounder, and sort of looks like a worm itself. Stoddard tells me he smushes them against his palate before swallowing them. I gulp, then ask, in a voice rather more accusatory than I mean it to be, why anteaters’ tails are so big.

“They actually use it as a blanket,” Stoddard said. “When they’re sleeping, their body temperature goes way down, so their tail helps to keep them warm and camouflage.”

Nico’s tongue darts out to pull more worms out of my hand while I ponder this and try to relax my shoulders. That tail factoid is actually kind of cute. I find myself rubbing his nose a little with my thumb, like I’m petting him (the zookeepers ask me politely to stop, as they’re trying to use nose rubs in behavioral training.)

Stoddard tells me anteaters use their claws to tear open ant and termite mounds. In South America, these things can be as hard as concrete. However, their claws are also used for defense against their predators, including jaguars and feral dogs.

“They can stand up on their hind legs and present their claws and do a lot of damage that way,” she says, casually describing my worst nightmare. “Sometimes you might see on social media a picture of anteaters standing up, or of a smaller anteater, called a tamandua, and (the caption) is like, ‘Oh, it wants a hug.’ And, unfortunately, that’s a picture of the animal that’s frightened.”

This is validating because I don’t think it looks cute at all when anteaters do that. I think it looks terrifying, and, in fact, this image is what started my whole phobia. But it’s also, to my surprise, sort of sad. I look at Nico’s eye, which turns out to be cute-little, not beady-little, if you know what I mean, and imagine him being scared. “Poor little guy,” I think. I don’t like the idea of this creature, whose snout is covered in sticky saliva as he harmlessly sucks down his mealworm snacks, being in danger.

When I’m done feeding him, we go around to the public side of Nico’s habitat and watch him walk around for a bit. I don’t feel as uneasy about him as I did before. Now I know that his oversized tail is just a blanket, and if he stood up on his hind legs, it would just be because he’s scared too. But I don’t think it’s these facts that made me feel better. It was looking Nico in the eye and seeing, firsthand, that he’s just another living creature trying to get by. I ask, jokingly, if the zoo sells any shirts that say “I fed an anteater and I survived” but they don’t, of course. Maybe I’ll get my own shirt made, instead. It could say “Face your fears, especially when they’re silly.”

Want to have your own behind-the-scenes experience at the Reid Park Zoo? They hope to reintroduce the anteater encounters soon, but for more information, check out reidparkzoo.org