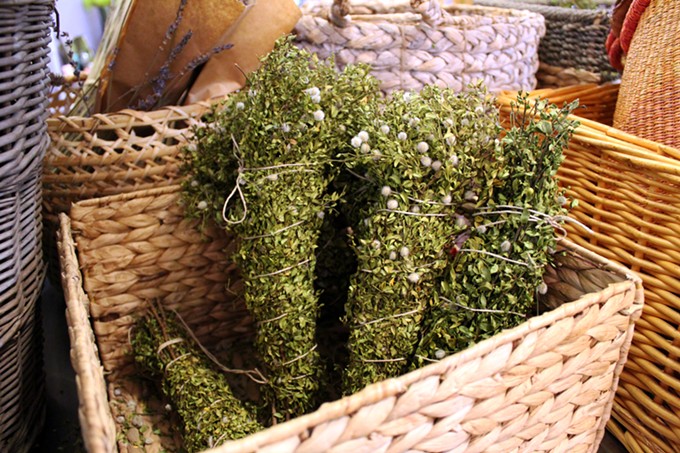 (Katya Mendoza)
Hand-picked creosote bundles dry in a basket at Sonoran Rosie's workshop on Friday, July 1. Also known as chaparral, these bundles will release the smell of monsoon once activated by a shower's steam.

Monsoon season in Tucson, which lasts from mid-June to late September, is a special time for locals. It provides desert inhabitants with the euphoric sense of biophilia, or innate instinct to connect with the natural world around them.

“The theory is that when you’re looking at these beautiful views and plants, you’re giving yourself a shot of feel good molecules,” said Dr. Esther Sternberg, a University of Arizona researcher who studies the mind-body interaction with its natural and built environments.

The rains can trigger a relaxation response and reduce stress hormones. Certain integrative health behaviors, such as walking outside and inhaling the creosote bush, for example, are posed to change anti-stress brain pathways.

The shrub, which is found in the Southwestern region of North America and most commonly in the Sonoran, Mojave and Chihuahuan deserts, is also known as greasewood or chaparral. Creosote is often credited for the earthy fragrance that emits during monsoon season. It has also been said to have existed since the beginning of time, according to the Tohono O’odham creation story.

According to the O’odham, Shegoi was the first plant that Tcuwut Makai, the Earth-Maker, created.

“It is the greatest, highest, most sacred plant we have that inspires the strongest medicine,” said Camillus Lopez, senior cultural mentor at Tohono O’odham Community College (TOCC).

Lopez, who teaches Tohono O’odham studies courses, is on the Himdag Committee that oversees TOCC students’ growth in cultural knowledge.

The plant has been historically linked to a variety of homeopathic remedies for various ailments such as chest infections, intestinal discomfort, venereal diseases and more. There are even claims it treats cancer. While it has been advised the plant should not be consumed for extended periods of times, its antibacterial properties have found their place in homeopathic remedies.

Local business owner and herbalist-in-training Rosie Crocker, founder of Sonoran Rosie, noticed an absence of desert plants in the herbalism world. An essentially “white-washed” European field, she noticed the lack of natural products sourced from the Sonoran Desert and decided to create sustainable herbal beauty products of her own.

“I want to be respectful to the heritage of the plants that are here,” Crocker said. “I use them in ways that have never been used before.”

Her products use desert herbs for aromatherapy and wellness purposes.

“Although I believe that plants are autonomous, I believe that just like food we can all participate in a relationship with plants,” Crocker said. “It’s always good to be respectful of people’s culture and not just try to capitalize off of a traditional way of making something.”

In addition to making everyday essentials such as deodorant, lip balm or lotions, her naturally sourced products smell like rain.

Creosote is one of her primary ingredients. She said it has a calming, grounding and protective effect. “They have traced back a root system to (about) 11,000 years old and to me that feels like it has that energy of being ancient, tenacious and super healing,” Crocker said.

According to researchers, the volatile organic compounds found in desert plants are good for our health. Gary Nabhan, a research social scientist at the University of Arizona, said the oils desert plants exude as systems are highly potent, like a “symphony orchestra of fragrances.”

Nabhan, who recently celebrated the 40th anniversary of his book “The Desert Smells Like Rain,” has a background in agricultural ecology and ethnobotany. He said he was inspired by a young O’odham student who identified the paradox of the desert’s perfume.

He set out on a scientific mission to address why the desert smells the way it does. The debate between scientists has gone on since the 1930s. While geologists felt the soil crust on the surface of the desert made up of fungi, algae and cyanobacteria emitted fragrances when it rains, botanists have argued the creosote bush is responsible. Botanists used its 35 potent volatile oils as evidence. “The kinds of hazes and desert mirages we see when we look across large distances of the desert are from one of those volatile chemicals and creosote bush called isoprene,” Nabhan said.

Nabhan and his collaborators identified 115 volatile organic compounds in at least 60 plant species in the Sonoran Desert that are released when it rains. At least 15 have been found to offer “tangible” health benefits like improved sleep, heightened mental clarity or stabilized emotional-hormones. Evidence also showed some of these compounds are released at the onset of rain, when there’s an increase in humidity or stronger winds. Once released into the atmosphere, the compounds travel into our lungs and enter the bloodstream.

“When we get a summer monsoon rainstorm, we have a barometric pressure change, a change in wind speed and ferocity (and) sometimes wind direction changes that make us more receptive to these things because our senses are hypersensitive to ozone changes,” Nabhan said.

“Even when it’s not raining on a hot day in June, the creosote are giving off a gas,” Perry Grissom, a restoration ecologist at Saguaro National Park, said. “You can smell them before the rain comes.”

While scientists and indigenous practitioners have known the health benefits of ingestion or even absorption of Sonoran Desert flora, other integrative practices such as forest bathing have become mainstream.

“This fact that we’re out breathing good air, the same air that the cactus are (transpiring) can be a health benefit,” Woolery said. “Coming to be one with the landscape is one of the ways I describe it.”

Her work blended art, ecology, and connected people to the environment. Using her own developed “methodologies,” the core of Woolery’s work exists at the intersection of art and natural science research.

“We’re engaging in multi-modal knowledge systems, (which) means there are many ways of knowing our local habitat, plants, herbs or whatever you’re studying,” Woolery said. She said she feels like her methodologies align more with traditional ecological knowledge than Western science.

Traditional ecological knowledge is the ongoing practice or learning of the relationships between living beings in a specific ecosystem, commonly acquired by Indigenous people over time.

A similar practice can be seen in TOCC’s Himdag curriculum, which teaches students the Tohono O’odham culture, values and way of life. The tribal college requires students to learn some of the language, history and culture from the “beginning” to the 1980s. Certain events at the college revolve around the O’odham seasonal calendar.

The old way of the calendar, according to Lopez, would follow the sun, moon and stars’ placements in the sky. For centuries O’odham people could predict the weather or know when to harvest crops with this knowledge.

For example, Jukiabig, or July, is the month of big rains. Months, which are considered to be more like seasons, follow cactus growth.

“In the traditional myth, there’s a story about how the cactus was born,” Lopez said. Depending on the watershed area and when cactus flowers begin to bloom and gather fruit, or bahidaj, marks the beginning of a new season and new year.

“The saguaro cactus fruit used to be the foremost thing in our culture, to make bahidaj and to make navai’t (cactus wine) because they wanted rain,” Lopez said. “Life centered around the saguaro fruit.”

Juk, or rain, is the most sacred thing in the desert. It is a cause for celebration for other cultures as well. Annually in Tucson, locals who live in the Menlo Park neighborhood host the Dia de San Juan Fiesta, or feast day for Saint John the Baptist on June 24. The celebration has occurred by the Santa Cruz River for at least 25 years. Liza Grant, the program’s coordinator, took over the celebration after her mother passed.

“Without water that area could not be ‘the birthplace of Tucson’,” Grant said in an email. “The [celebration] honors the 4000 years of continuous habitation along the river and the food raised by each culture.

The tradition marks the beginning of monsoon season.

Places such as A Mountain have been overrun by buffelgrass. This invasive species posed a fire risk and completely demolished the saguaro population, Grissom said. “You can see the future if you don’t do anything.”

Saguaro National Park hosts ongoing volunteer buffelgrass removal parties such as Second Saturday in the Rincon District or Fourth Saturdays in the Tucson Mountain District which incentivize park goers with one-day passes for helping. Weed Free Trails Program teaches volunteers a variety of skills and Wilderness Volunteers invite visitors to camp at the park for a week. The park will also launch their Adopt-an-Area program this fall and will be installing boot brush stations with signs at trailheads over the next couple years.

Grissom has been at the park since 2006. He said his favorite-smelling desert plants are odoras, desert lavender and dalea to name a few. When the winds are thrashing about the desert, he said it smells like a “savory stew.”

“Currently we have that smell when it rains in the desert, but it doesn’t mean it’s guaranteed to be that way in the future,” Grissom said.

The truth can be found on A Mountain where the existing plant population has been reduced to sick saguaros, “a few scraggly plants of some kind,” and buffelgrass, which gives off a different smell than the “desert rain” most admire.

“[The Desert] is not guaranteed to be here,” Grissom said. “I just don’t want to be the guy on duty when the saguaros get wiped out at Saguaro National Park.”

Desert lovers can learn more about how to take care of the land and plants here nps.gov.