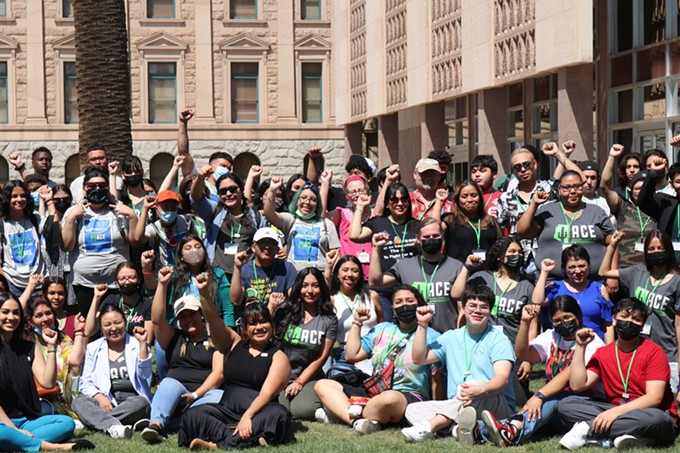 Photo by Gloria Gomez | Arizona Mirror
Arizona Center for Empowerment members and advocates gather in front of the State Capitol on Wednesday, April 27, 2022. ACE held the event to unveil a “people-centered” budget proposal for lawmakers considering how to spend the current state surplus.

Tatyanna Duchene pushed her 1-year-old son’s stroller around the State Capitol on Wednesday, following a crowd of students and volunteers as they gathered to petition legislators to use the current $5.3 billion dollar budget surplus for community needs.

Her daughter, Khaleesi, is just 4 years old, and enjoying the one-on-one attention she gets from her preschool teachers. But Duchene is conscious that her educational future is bleak in a state that ranks 47th in the nation in per-pupil funding. She decided to add her voice to the Arizona Center for Empowerment’s advocacy day and call for budget initiatives that include increased funding for education, among other areas.

“I just want a better future for her,” she said.

Community advocacy organizations ACE and the People First Economy for Arizona called on legislators to ramp up education funding to mitigate the cuts made during the Great Recession more than a decade ago that haven’t yet been replaced. Advocates lobbied for the state’s record-high surplus — an estimated $5.3 billion, or about 40% of the state’s current year spending — to be used to improve teacher retention in the face of an ongoing shortage.

Eddie Barron, a senior at Sunnyside High School, traveled from Tucson to the state Capitol to sound the alarm over teacher losses in his district.

“This year, I have had so many teachers step out on me and my classmates, for no other reason than the fact that they are overworked, underpaid and underappreciated by the Arizona GOP,” he said.

Arizona ranks near the bottom in the country in wages and working conditions for teachers. Investing in public school classrooms, Barron said, is the key to ensuring success for the vast majority of students in the state who attend public schools like he does — and, like him, many of whom will be the first in their families to attend college.

The advocates also called for state action on affordable housing. Investments in the state’s Housing Trust Fund to aid with growing homelessness, rent assistance, and the construction of affordable housing all are needed, they said, as is statewide rent control.

Rents in the Phoenix metro area rose at the fifth-highest rate in the nation between 2020 and 2022, according to a recent Washington Post analysis. The average rent is now $1,550, an increase of more than 28% since the start of the COVID-19 pandemic.

For Phoenix residents like 17-year-old Victor Rodriguez, rising rent prices are an ever-present worry. A recent rent spike caught the Rodriguez family of four by surprise a few months ago.

“Housing has become a real problem,” he said. “I live in an apartment, and we used to pay like $800 a month, and now we’re paying over $1,000, for just a two bedroom and one bathroom apartment. So, it’s getting pretty bad.”

There were bills to address the growing crisis of housing unaffordability. One bill aimed to add $100 million to the Housing Trust Fund and another sought to repeal Arizona’s ban on rent control. But both were sponsored by Democratic lawmakers, and were killed early on in the legislative session by Republicans, who control the legislature and determine which bills are considered.

Paid family and medical leave were among the budget priorities for ACE, which noted that the pandemic had strengthened the need for it. The group called for 24 weeks of paid leave, which would ensure that workers can recover from serious illnesses like COVID-19, care for ailing or new family members, and have adequate time to grieve if a relative is lost to the virus.

“It won’t take me only two weeks to spend with a loved one and grieving (for) this loved one passing away,” said Alexis Garcia, a community organizer for ACE.

Other initiatives proposed establishing funds to help alleviate the uneven access to resources caused by citizenship status or homelessness. An economic support fund would provide assistance to everybody, in sharp contrast to COVID-19 funds that were designated only for legal citizens, and the Arizona ID Project would give everyone free state-issued IDs.

A recent attempt at a so-called “skinny” budget by Republican lawmakers that would have merely continued the current year’s spending levels was rejected in a committee hearing last week, and negotiations on how to spend the surplus dollars are ongoing.

The unspent funding is an opportunity to help hurting communities across the state, Avalos said, but politicians have priorities that are out of touch with the realities their constituents deal with.

“Instead of addressing Arizona’s fastest rising rent prices and 15th-highest cost of living, many lawmakers are advocating for billions more dollars in tax cuts for the rich,” she said. “And instead of investing in public education, lawmakers and Governor Ducey are too busy banning books and allocating more money towards charter schools.”