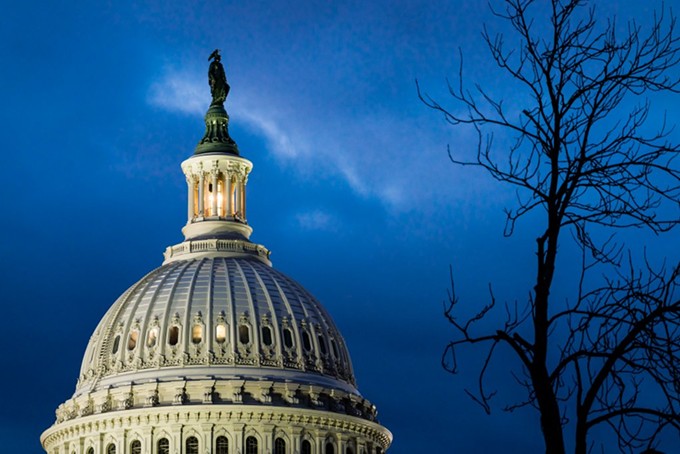 Photo by | John Brighenti
The U.S. Capitol dome at dusk.

WASHINGTON — With just five days left before government funding expires, Democrats and Republicans are trying to reach agreement on $1.5 trillion in federal spending as well as billions more in assistance to Ukraine and COVID-19 relief.


U.S. Senate Majority Leader Chuck Schumer wrote Monday morning that Democrats made “​​a reasonable global offer to Republicans” and that he hoped both political parties would reach agreement before a stopgap government funding bill expires on Friday at midnight.


“We have been working on a bipartisan, bicameral basis through the weekend to finish work on an omnibus package that includes robust assistance to the people and government of Ukraine and additional funds to ensure our country is prepared if and when the next COVID variant strikes,” Schumer wrote.


The Biden administration last week requested Congress provide $10 billion in defense, economic and humanitarian aid to Ukraine amid the ongoing war there as well as $22.5 billion in coronavirus relief funding.


That threw a bit of wrench into ongoing negotiations to fund the government.

Democrats and Republicans have been working for months to hammer out a final agreement on the dozen annual government funding bills before a temporary spending measure expires on Friday.


Those talks were fragile enough without both parties trying to determine what is needed for the Ukrainian war effort as circumstances on the ground change by the hour.


Thirty-six Senate Republicans wrote a letter to President Joe Biden last week citing concerns about fraud and asking for “a full accounting” of how the U.S. government has spent the roughly $6 trillion on COVID-19 aid Congress has approved since March 2020.


The group specifically asked the White House to detail how much of the $350 billion in state and local aid Democrats provided in their $1.9 trillion COVID-19 package in March 2021 has been used for vaccines and testing.


According to the Committee for a Responsible Federal Budget’s tracker, about $244 billion of the $350 billion for state and local governments has been spent.


Local, state and tribal governments were able to use the funding for a variety of pandemic-related activities, including public health; premium pay for essential workers; to replace revenue lost due to the pandemic; and to invest in water, sewer, or broadband infrastructure.


The Senate GOP group didn’t rule out supporting billions more in coronavirus aid, but said “it must be an urgent priority that the trillions of taxpayer dollars already appropriated are being spent effectively.”


Speaker Nancy Pelosi wrote to her conference on Sunday to say that “Congress intends to enact this emergency funding this week.” She also said the House is working on separate legislation to address the ongoing Russian war in Ukraine.


The California Democrat said that bill would “further isolate Russia from the global economy” by banning imports of Russian oil and energy products, repealing normal trade relations with Russia, allowing the White House to increase tariffs on Russian imports and taking the first step to end Russian access to the World Trade Organization.


The White House, so far, has been reluctant to block imports of Russian oil over concerns it would increase gasoline prices even more than they’ve already gone up.


Pelosi wrote in her letter that “the United States need not choose between our democratic values and our economic interests.”


“The Administration and the Congress remain laser-focused on bringing down the higher energy costs for American families and our partners stemming from Putin’s invasion,” she continued.


The strong statements from Schumer and Pelosi followed a Zoom call that brought hundreds of U.S. lawmakers together with Ukrainian President Volodymyr Zelenskyy this weekend.


According to an individual on the call, Schumer told Zelenskyy that he, Senate Minority Leader Mitch McConnell and several other lawmakers were working in “a bipartisan fashion to get all the assistance the administration has requested for the Ukrainian people. Together we will get that assistance of over $10 billion in economic, humanitarian, and security assistance to the Ukrainian people quickly.”