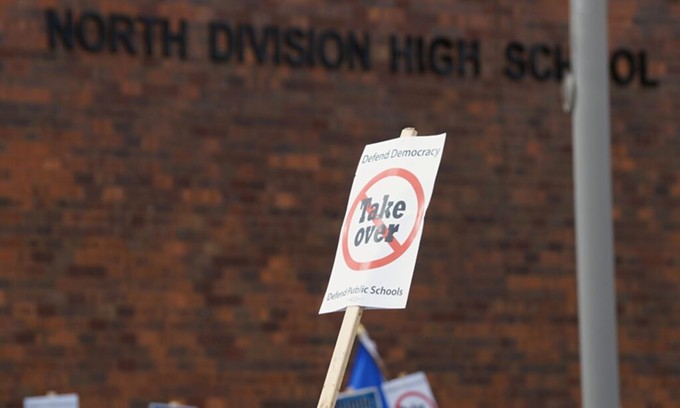 In 2019, there were 180 Arizona schools that received a D or F rating and new legislation given preliminary approval by the House would hand over their operations or shut them down if they don’t improve.


House Bill 2808 establishes the Arizona Achievement District. This district is made up of high-performing district and charter schools handpicked by a nine-member board appointed by the governor. Out-of-state charter school operators may also be welcomed into the district.

The new board would use performance data from the 2018-2019 school year and this year to identify struggling schools. No school grading was done between those years due to COVID-19 and the shift to remote learning. Based on these results, schools would be given several choices: independently improve their performance within three years, partner with a high-performing school that will take over operations, be replaced by a “Fresh Start” school with a proven academic track record, close down, or consolidate with a nearby school.


The move is an extension of GOP school choice initiatives that favor charter over public schools. Struggling schools may elect to be replaced with a “Fresh Start” school, or might be forced into the arrangement if they don’t improve on their own. “Fresh Start” schools would be run by an Achievement District School to eventually replace a failing school on the same campus or within its attendance boundaries. They operate out of a vacant building or one which is being leased or purchased from a school district.


During a Feb. 15 Education Committee hearing in the state House of Representatives, sponsor Rep. Michelle Udall said these “Fresh Start” schools would need to be charter schools, because public school districts can’t buy up schools in other districts.

The Mesa Republican, who chairs the committee, noted the program’s application of pressure on schools garners positive results.


Udall’s bill last month won preliminary approval in the House of Representatives, but has yet to face a formal vote. If the House passes it, the measure would go to the state Senate for further consideration.


A similar program in Tennessee found exactly the opposite. The state began taking over underperforming schools with its own Achievement School District in 2011 with the goal of moving the bottom 5% into the top 25% in five years. But after nearly a decade of handing struggling neighborhood schools over to charter school networks, the schools failed to meet the state’s performance goal — and the state is now working on moving several of them back into their original districts.


Critics of the bill say its measures don’t actually address the reasons so many schools are struggling.

You have to meet kids where they are and then you have to have the resources to help them grow. They need more, and teachers need more.


A 2019 U.S. Census Bureau review placed Arizona 49th in school funding. The state spent about $10,000 on students that year, well below the national average of $15,700. Beth Lewis, the director of Save our Schools Arizona, a public school advocacy organization, pointed out that low funding invariably contributes to lower standardized test scores and graduation rates. It doesn’t help that these schools often operate in already poor communities.


Arizona’s poverty rate was higher than the national rate, even before the devastating impact of COVID-19. Students whose families struggle economically often start school at a lower educational level than their peers, experience schooling gaps and might not have access to high quality learning materials at home.


Many D- and F-rated schools are in communities with entrenched poverty. Marana Unified School District Superintendent Dan Streeter said Roadrunner Elementary in his district was a C-rated school in 2019, but has been heavily impacted by the COVID-19 pandemic and he worries it may be in danger in the future if Udall’s legislation passes. About 82% of Roadrunner’s student body is on the free and reduced lunch program, and the surrounding community’s median income is 60% lower than the average for the rest of Marana. Its placement in a rural area means that community resources are scarce: The nearest library is 14 miles away.


“These are factors that impact letter grades,” Streeter said.


Expecting school districts to resolve systemic issues in such a short period of time is hardly fair, especially when the bill doesn’t provide adequate funding to do so, Tucson Unified School District Superintendent Gabriel Trujillo said.


Schools that choose the bill’s self-improvement route would be granted $150 per student for three years. For schools that are already overstretched, critics say that investment is insufficient. In Maricopa County, Buckeye Elementary School had an F rating in 2019. Its enrollment was 904 last year – assuming enrollment stays fairly equal, the total funding Buckeye Elementary might receive to turn around their performance is $405,000.


If schools decide to partner with an Achievement District or “Fresh Start” school — relinquishing their control and, in the latter case, the whole school — they may apply for one-time funding of $2,000 per student. That “partner” may end up being an outside charter school operator who profits from taxpayer money.


Implementing punitive measures shifts the focus from student growth to performance and is detrimental to students in the long run, critics said. Punishing schools for not meeting standards drives away high quality teachers — the most valuable asset in a school’s arsenal. Arizona continues a six-year streak of teacher shortages, and a survey last month found nearly 2,000 vacancies.


“When you have a student body that is more needs-intensive and you have a more punitive model for determining school letter grades and determining teacher performance-based pay, that doesn’t necessarily romance the most highly qualified applicants to come and take teaching positions,” Trujillo said.


The schools most at risk of facing takeovers are those that serve marginalized communities. Lewis estimates that 22 out of 77 schools in the Navajo Nation would be affected by HB2808. Joe Bia, a governing board member at Kayenta Unified School District, said that keeping schools open in Kayenta is critical. The town is rural and isolated, and schools and their after-school programs are among the only educational resources for youths. Shutting them down means cutting kids off from internet access they may not have at home.


Changing the way these schools work to meet performance standards might also put the cultural identity of schools at risk. KUSD families are predominantly Navajo, and he said the schools work to preserve their cultural heritage and language in classrooms.


“If we’re going to have to change the way that we’re running our schools, I can see that panning out in many catastrophic ways — one impacting elemental cultural aspects,” Bia said.


Tucson Unified School District is another district with cultural identities that would be negatively affected by eliminating local control. It’s home to the largest Afghan refugee student population, a sizable English Language Learner cohort, and is the top choice for Tohono O’odham and Pascua Yaqui families. Trujillo said he doubts transplanting educational frameworks from other regions into a place as diverse as Tucson would work.


It also provides funding equivalent to HB 2880 — $150 per pupil. But the difference is the guidance that comes along with it, and a lack of punitive measures.


Avondale Elementary School District significantly improved working with the Project, tripling their AzMerit mathematics scores and nearly doubling scores in English in the 2017-2018 school year from the baseline established in 2014-2015. Still, those three years of gains were not enough to move all their schools out of D grade territory. A short turnaround time for schools with long-standing difficulties simply isn’t feasible, Save Our Schools Arizona noted in a written fact sheet for Tuesday’s town hall.


“You have to meet kids where they are and then you have to have the resources to help them grow,” Wilson said, “They need more, and teachers need more.”