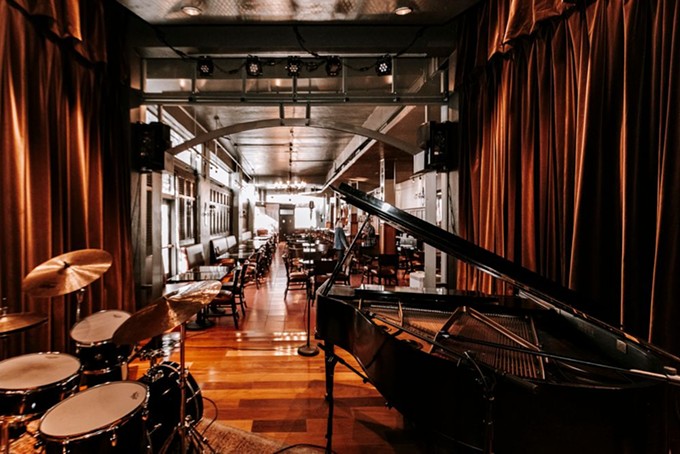 Over the last 100 years or so, Hotel Congress has survived structural fires, seen prohibition come and go, and hosted everyone from U.S. senators to John Dillinger and his criminal gang. Now, a new addition to the historic landmark fuses a New York night club with a borderlands mezcal bar.

Vint grew up in Tucson and graduated from Rincon High School.

He also worked at Hotel Congress as a desk clerk for the night shifts before obtaining a bachelor’s degree in jazz performance from William Paterson University in New Jersey and a master’s degree from the Manhattan School of Music. From there, Vint established a career as a freelance drummer, composer and bandleader throughout New York starting in 2007.

Vint says he plays everything from jazz and salsa to pop and rock, and has performed in some of the world’s most renowned venues and appears on numerous albums. He has also performed on screen in Boardwalk Empire, The Knick and John Wick.


After performing on the plaza in April 2021, Vint brought up the idea of turning The Copper Hall into a space inspired by the Village Vanguard jazz club in New York, where Vint worked as head bartender.


Now, after 15 years in New York, and the last year and a half bouncing between New York and Tucson, Vint is returning to his desert home full-time to teach jazz at the University of Arizona and work with Oseran as the music programmer for The Century Room.


“The Vanguard is kind of the Mecca of jazz clubs, and all other jazz clubs point to The Vanguard,” Vint said. “That was a point of reference in the design stages, but we did a lot of detail work to make the space feel as though it has been there for 100 years. The name is a nod to the fact that Hotel Congress just celebrated its 100th anniversary. It is also referencing the century plant — we’re an agave bar with over 40 agave spirits — and we are also hoping it will be there for 100 years. When you walk in, it feels like it has always been there.”


The former foyer to The Copper Hall is now a soundproofed stage. The new entrance is through 100-year-old vestibule doors on the corner of Congress St. and Fifth Ave. The doors open to the bar on the left and wooden shutters along the south windows facing Congress St. There are booths, bar stools and table seating for 75 with a clear line of sight to the stage bookending the far-right corner of the room.


“You feel like you’ve arrived at this beautiful and important space,” Vint said. “I always like bars and venues where you walk in and feel like you have to lower your voice a little bit out of respect, and I feel that this may have that effect on people.”


Although the space as a whole is new, elements of the past are laced throughout the interior.


“All those brown, chocolate, yummy drapes that were around the whole banquet facility are now reconfigured as the backdrops for the stage on all three sides,” Oseran said.

“We are going to be open this Friday and Saturday to start but plan to expand our days and hours as we get a sense for how it’s going to fit.”


The first to perform in this new space was the Homero Cerón Latin Jazz Quartet on Friday, Feb. 4. Cerón spent more than 40 years as the principal percussionist for the Tucson Symphony, and is planning to play a mix of originals and Latin classics. Cerón also happens to have been Vint’s first drum teacher.


On Friday, Feb. 11, Susan Artemis and her quartet are playing “Love Songs from the Dark Side of the Lounge” for a special Valentine’s weekend concert.


The Howard Alden Trio is taking over the stage on Friday, Feb. 18, to perform Alden’s favorite compositions throughout his career. Alden is a world-renowned guitarist from New York City who recently relocated to Phoenix.


“I look forward to having a dedicated room that elevates jazz in Tucson,” Vint said. “Local and world-renowned jazz musicians now have a space where they can perform original music and special projects…the drinks are going to be great, too.”