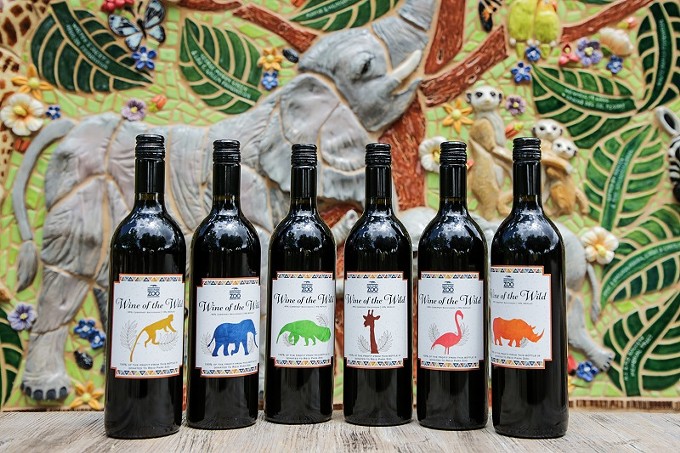 Have you heard the one about the African elephant, squirrel monkey, giraffe, flamingo, white rhino, and anteater that walk into a bar? A wild time was had by all.

But in this case, premium wine is the foundation of the festivities, and whenever a love of animals and passion for wine intersect, Rancho Rossa Vineyards always seems to be at the heart of the story.

This winery located about 50 miles southeast of Tucson has been supporting animal welfare and rescue programs since they planted their first vines in 2002. As the 20th anniversary of this historic moment in Arizona viticultural history draws near, they’ve released a special wine that pays tribute to six of the more than 250 animals that reside at Tucson’s Reid Park Zoo. And in collaboration with Rescued Hearts Cellars, their sister non-profit organization, Rancho Rossa Vineyards will be donating 100% of the profits from bottle sales to the zoo.

The “Wine of the Wild” is a Bordeaux-style red blend made from Cabernet Sauvignon and Merlot grapes that were grown onsite at the winery’s 24-acre estate in the Elgin-Sonoita wine region. Each of the more than 1,500 bottles produced features one of six animals that call our local zoo home, with a corresponding color and creative design on the label to make it unique.

In evaluating the styles of wine that would be a suitable fit for their philanthropy, the winery’s owner Breanna Hamilton knew right away that some of the five grape varietals that define the iconic Bordeaux region would need to be in these bottles.

“We really love Bordeaux wines and we grow Bordeaux grapes, and it’s the style of wine that our fans love the most,” said Hamilton. “We blend Cabernet Sauvignon and Merlot every year, sometimes adding other Bordeaux varietals like Petit Verdot and Malbec, and our goal is always to produce nice, well-rounded blends.”

The six animals that made the cut for the Wine of Wild series are the African elephant, squirrel monkey, giraffe, flamingo, white rhino, and anteater. Though many individuals have purchased all six bottles in the series as a collector’s set—I mean, wouldn’t you?—the one that’s sold the most so far is the African elephant.

“Everyone loves big animals, especially kids who think they’re out of this world,” she said. “Elephants are big, cool, fun, and funny, with great personalities.”

While the elephant currently leads sales, Hamilton’s personal favorite is the rhino which represents the one at Reid Park Zoo who she refers to as “a big puppy dog.”

“Here you have this huge scary animal that enjoys being rubbed and just wants to be loved,” she said.

Hamilton’s winemaker husband Chris reportedly relates best to the squirrel monkey, testimony that didn’t surprise her because “he’s a little bit of a monkey himself,” she revealed.

Wine of the Wild bottles are $25 each and can be purchased at the Rancho Rossa Vineyards tasting room at 201 Cattle Ranch Lane in Elgin. They can also be ordered online at RanchoRossa.com/shop.

Samples of the wine will be poured at ZOOcson as well, an evening gala at Reid Park Zoo on Friday, Oct. 8, featuring cuisine from local restaurants, samples of local wine, beer, and spirits, auctions, animal ambassador presentations, and live music. Tickets can be purchased at ReidParkZoo.org/event.

As I take my own walk on the wild side, I think my Wine of the Wild choice would be the anteater. Ants can ruin a backyard party, and I have a reputation to uphold.