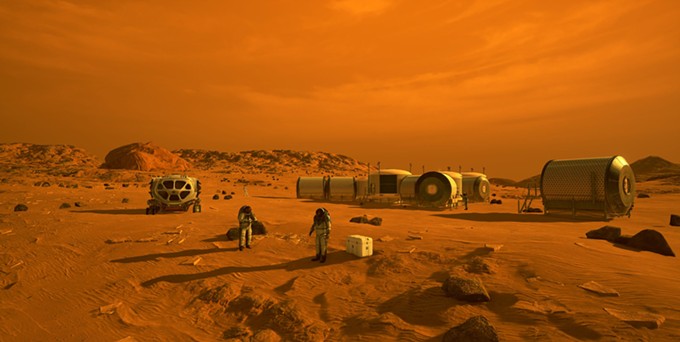 NASA
This artist’s concept depicts astronauts and human habitats on Mars. But that’s years off, after several missions to the moon, NASA spokesperson Cheryl Warner says.

PHOENIX – Is bringing humankind to Mars necessary or realistic in our lifetimes?

Tesla CEO Elon Musk is adamant about it, and he and two fellow billionaires are pushing the boundaries of how far private companies have gone into the stratosphere and beyond.

But some experts are raising concerns about the high-priced and publicity grabbing aeronautics.

“Space is not forgiving. It’s conspiring to kill you every minute,” said Madhu Thangavelu, a lecturer at the University of Southern California and expert in the design of complex space projects, including space stations and exploratory missions. “And we have this innate desire to go out and be among the stars … but we are not capable biologically to do that.”

Despite such daunting obstacles, Thangavelu, who has discussed space travel with Musk, finds the early efforts promising.

In May, SpaceX successfully launched and landed a Starship rocket for the first time without exploding. Starship SN15’s completion of the high-altitude flight test marked a huge milestone in Musk’s ambitions to send humans to Mars.

SpaceX intends to launch the first orbital Starship flight this month. Starship (the spacecraft and Super Heavy rocket collectively) is meant to be like a commercial plane that will take passengers and cargo into Earth orbit and eventually to the moon, Mars and beyond. Also in May, SpaceX announced its plan for the July flight, which will launch from the company’s facility in Texas and touch down in the ocean off Hawaii.

SpaceX estimates it would take six months to get to Mars. Thangavelu said he has asked Musk many times about the logistics of passengers living in a rocketship for that long. Musk told him that he’ll set people up with where they want to go but it’s their business what they do during the time it takes to get there.

“Not only am I impressed with Elon for his focus on this technology, but I am also absolutely awed by the work that is being carried on,” Thangavelu said. “You know there was a time in the history of the technology programs in the United States where we were held in awe by the rest of the world because of the advances we made very quickly.”

The SpaceX website says Mars is 140 million miles away – making it “one of Earth’s closest habitable neighbors. Mars is about half again as far from the sun as Earth is, so it still has decent sunlight. It is a little cold, but we can warm it up,” the website says.

Theoretically, SpaceX would warm up Mars by blasting both poles of the planet with pulsing nuclear missiles to create tiny artificial suns that would warm the planet and induce an Earth-like atmosphere, Musk said at an event in 2015, according to the Verge. Musk has said that terraforming (the hypothetical process of making a planet or body similar to Earth) Mars would be possible by nuking it with 10,000 missiles, but this would use up almost all of humanity’s supply of nuclear weapons.

NASA has said it isn’t possible to terraform Mars with today’s technology. Mars does not retain enough carbon dioxide that could practically be put back into the atmosphere to warm the planet, researchers said in a 2018 study published by Nature.

In 2020, Musk told the podcast Sway that becoming an interplanetary species might be humanity’s only chance at survival once Earth is uninhabitable. SpaceX declined to comment for this article.

Hannes Bernhard, a postdoctoral research scholar at the School of Earth and Space Exploration at Arizona State University, has said that colonization of Mars is logistically possible and that what SpaceX has exhibited so far seems promising.

“No matter how badly we mess up Earth, it will still be more habitable (than Mars),” he said. “The incentive for people to leave or go to space is the reason why people came to a place like Arizona. It’s the opportunity.”

While Musk is pushing a more fatalistic view, other billionaires are seizing on the opportunity to profit from the appetite for space tourism. Richard Branson, the founder of the Virgin Group, on Sunday successfully rocketed to the outer edge of Earth’s stratosphere on his Virgin Galactic vehicle.

Branson is the first billionaire to travel that far with private funds. After two more test flights, Virgin Galactic may begin flying the first paying passengers next year.

Amazon CEO Jeff Bezos also has said he will go to space on July 20 on the first human spaceflight for his company, Blue Origin.

Like Branson, Bezos will only fly to the edge of space (about 50-plus miles above Earth), then return. In future, these suborbital flights will take paying passengers. So far, more than 600 people have reserved seats with Virgin Galactic at $250,000 each.

Musk doesn’t intend to do quick up-and-down trips to the edge of space; his capsules will go into orbit and then to Mars. He has said Starship could be fully up and running by 2023 if development and testing go well. Musk said on Twitter last year that he plans to build up to 100 Starships each year to colonize the solar system.

Some critics have raised concerns that these billionaires’ spending on other-worldly adventures is short-changing earthlings. Reporting from ProPublica last month revealed that Bezos and Musk have paid no federal income taxes for some years, legally avoiding payments to the IRS as their fortunes grew.

With talk of the three billionaires attempting space exploration – and for Musk, space colonization – it’s logical to wonder what NASA has planned. Although the federal agency has sent rovers and probes to the red planet, inhabiting Mars is not on the immediate agenda.

NASA spokesperson Cheryl Warner told Cronkite News the agency will establish capabilities for increasingly longer human missions on and around the moon, as well as send crews on moon missions about once a year, but will always bring the crew home.

“At the moon, we will test the capabilities and gain the experiences we need to send the first humans to Mars, once again, bringing our crew home,” Warner said.

The current concept for NASA’s first human mission to Mars includes a ship that will remain in Mars orbit while crew board a lander for their descent to the surface.

Musk’s space travel project is comparable to NASA’s Apollo program in the 1960s and 1970s, which cost more $280 billion. In some years, NASA has taken up more than 4% of the entire national budget. It’s not been specified how much SpaceX’s Mars project will cost, but taxpayer money will not be used.

At an award show webcast in December, Musk said he’s highly confident SpaceX will land humans on Mars by 2026, and that the most important aspect is establishing Mars as a self-sustaining civilization.

“You want to wake up in the morning and think the future is going to be great – and that’s what being a spacefaring civilization is all about,” Musk is quoted as saying on SpaceX’s website. “It’s about believing in the future and thinking that the future will be better than the past. And I can’t think of anything more exciting than going out there and being among the stars.”