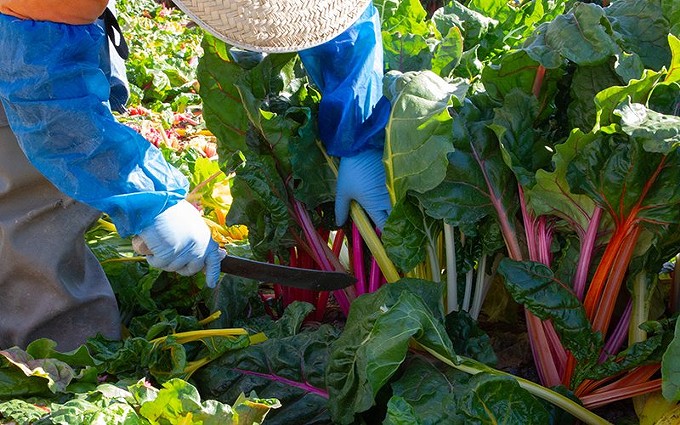 Jeff Rosenfield/Cronkite News
A migrant worker cuts Swiss chard at the base, leaving behind the stem. Parts of plants often are left to fertilize the field.

YUMA – The workers swing their machetes, chopping vegetables under the heat of a midmorning sun.

When the migrant workers take a moment to swipe the sweat from their masked faces, they can see the wall along the Mexican border, not a half-mile distant. But before long, they turn their attention back to a rainbow-colored field of Swiss chard.

It takes more time to clear a field since the COVID-19 pandemic began a year ago. Where there had been 25 workers in the field, there are now 15, to create social distance.

More buses are used to drive workers to the fields, and plexiglass guards were placed on farming equipment, according to the Yuma Chamber of Commerce. Some farms have added masks, daily temperature and blood-pressure checks and contact tracing after outbreaks.

The protocols were necessary to protect Yuma’s top industry, which depends on migrant workers – whom Gov. Doug Ducey declared essential when the pandemic began more than a year ago. Yuma is one of the nation’s major producers of vegetables, with the produce ending up in kitchens across the U.S.

Now, attention is turning to getting farmworkers vaccinated, but advocates for migrant workers say that effort trails the need.

Migrant workers – close to 9,000 temporary agricultural worker visas were issued in Arizona during 2020, mostly in Yuma – travel across the border every day from Mexico.

The Yuma Chamber of Commerce website says agriculture brings in an estimated $2.5 billion a year into the local economy.

Still, some farmworkers are nervous.

More than half a million agricultural workers had tested positive for COVID-19 in the U.S. as of March 10, according to Purdue University’s Food and Agriculture Vulnerability Index. It estimated that just under 7,200 of those cases were in Arizona, about 1,000 of which were in Yuma County.

“When our work partner sneezes, we all turn around,” Teresa De Jesús Rodríguez, a migrant worker in Yuma, said in Spanish. “Outside of work, we ask that person how they feel and make sure we always isolate the person.

“It is a little stressful because some cannot keep their mask on while they are cutting the crops.”

De Jesús Rodríguez said any health-protocol imperfections are not her employer’s fault.

“They instruct us very well, they tell us what to do, what measures to take,” she said. “They don’t just leave us here, they take good care of us.”

But Evangelina Valdez, another migrant farmworker, can’t shake her anxiety.

“We arrive and they take our (blood) pressure in the morning,” Valdez said in Spanish. “They say if something seems wrong, they will not let us go to work. Every day we come to work with fear that we might get the virus.”

Despite the precautions taken on buses – the addition of plastic partitions and assigned seating – Valdez isn’t convinced.

“We work only a few hours, and then we are afraid to get on the bus because it is not cleaned properly,” she said. “But we have to continue working hard.”

Farm owners said they are working to keep workers safe.

The Growers Co. is a third-generation family-owned produce company in Yuma that was established in 1950. Sonny Rodriguez, president and chief executive, said the pandemic transformed the company’s approach to agriculture.

“It was one of the biggest distractions that we ever had,” he said. “We screened over 1,200 people.”

“We quarantined a lot of people,” Rodriguez said. Once a case is diagnosed, the company launches contact tracing and conducts tests based on the contact-tracing results.

The company does not require tests but allows any employee to get tested as often as they want under an arrangement with the Regional Center for Border Health, a nonprofit organization that provides health care and training to border residents.

Amanda Aguirre, president and CEO of Border Health, said her organization screened 97,000 people in Yuma County for the coronavirus that causes COVID-19.

Now, attention is turning to vaccinations. But Sonny Rodriguez fears there won’t be enough vaccines to go around, and Aguirre agrees.

De Jesús Rodríguez is not concerned.

“The vaccine is a very strong topic, as for me I do not feel like it’s a big deal to have me as a priority for that,” De Jesús Rodríguez said. “Some of the other farmworkers here have told me that they do want the vaccine, but that it should be something optional.”

Some, including Valdez, worry about vaccine safety.

“I would like to get the vaccine, but at the same time we are afraid because many say that it has side effects,” she said.