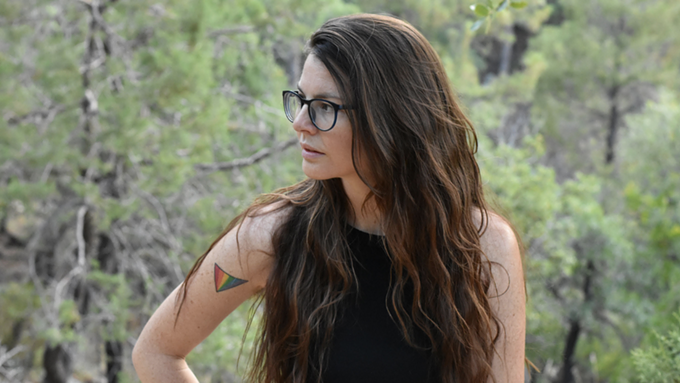 Though much has changed since 2016, local musician Lara Ruggles has remained steadfast in her devotion to combine electronic music and social commentary into modern anthems. On her debut album Wars Our Mothers Fought, released under the moniker Sharkk Heartt, Ruggles traces struggles both personal and national —
evident right from the track names like “This Is A Test” and “Nothing But Family.”

The album’s roots trace back to parallel complications in 2016: Ruggles’ previous band dissolved, and Donald Trump won the presidential election. That year, she also moved from Colorado to her previous home of Tucson. While her former music was folk-based, she shifted to a more electronic style in the midst of this upheaval — almost as a way to amplify her voice in the face of these difficulties. But as Ruggles explains, this shift came more out of the need of a solo artist having to take on all recording roles.

“When the relationship that I was in fell apart, my band also fell apart at the same time, and I felt very naked playing solo,” Ruggles said. “My songs felt incomplete because they weren’t the way I envisioned them. I had just moved to a different city and didn’t know a lot of folks, so I initially needed to do these songs on my own.”

The album’s opener, “One Step,” is the only song she wrote prior to Trump’s election, and signified for her a personal change of direction — again, the internal and external struggles parallel. The song sets the sound palette for the entire album with cool, echoing percussion and Ruggles building a slow chorus over quiet keyboards. Her lyrics reflect a continual struggle: "When you walked away I was a sailor, mapping my way out / Now I live here underwater, I find my way forward, but I still can't open my mouth." However, she states that the song isn't about anyone in particular, but about all the men who had been important to her, and the ensuing destabilization from their absence.

While it is a somewhat delicate beginning, the majority of the tracks are outright anthemic, with layers of Ruggles’ voice building into rallying cries like on the track "Call Us What We Are": "Don't call me sweetheart, unless you're my sweetheart, and if you were my sweetheart, you'd know."

“It’s always difficult to write a song that has a message, just because there’s limited space for lyrics. I tend to write longer songs, and I was trying to fight that a little bit here,” Ruggles said.


“Work Fires” is one of the most danceable songs of the bunch, with fingersnaps, sparse drums, and stuttering synthesizers that almost have a disco flair. It’s also one of the tracks most similar to the artists Ruggles says she was inspired by, such as Sia and Florence + the Machine.

“Pairing the melody with the lyrics always comes pretty naturally once I have a little bit written. I always feel like there’s a way the music wants to go, and I just have to follow it,” Ruggles said. “The challenge is fitting the rest of the song within that structure and wanting to say so much more than might fit in the space of a song that’s reasonable to ask people to listen to.”

"Hush We Found" is the most structurally progressive song on the album, moving away from the electro-pop rallying cries with a mellow intro and building layers of electronics. Ruggles also jumps between a long, sung chorus and spoken word, delivering some of her most cryptic lyrics on the album.

The album closes on a gentler note with the pained ballad "This Will Hurt," clearly the most emotional and passionate track. The song sees Ruggles coming to terms with the changes around her, both inside and outside: "It's good to break when something needs to change / And I'll be here, I'll always love you / But I will not intervene to save you pain."

“It’s a sort of personal quest to figure out what I need to do to develop myself. People say ‘If you want to make a change, look inward.’ And that can be a little bit of cop-out, but there’s also a lot of truth to it,” Ruggles said. “Obviously, that can be used as an escape and a way to not look at what’s going on. But it can also be a valid question about what you need to learn and work on yourself in order to be the activist that you would like to be.”
© 2022 Tucson Weekly