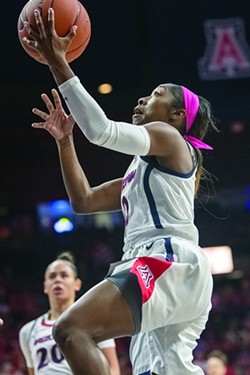 Aari McDonald will probably never have to pay for another meal in Tucson for as long as she lives. The Arizona Wildcat All-American point guard—an absolute Diminutive Badass—scored 33 points and made a dramatic late-game return to the court after suffering a cringe-inducing ankle sprain to lead Arizona into the Final Four for the first time in school history. With her breathless heroics to help the Cats avoid a second-round upset loss to BYU, followed by her sheer dominance in the Sweet 16 win over Texas A&M and the Elite Eight takedown of Indiana, McDonald firmly cemented her Legend status in UA lore.

McDonald shot a stellar 12-20 from the floor, had four assists and grabbed 11 ridiculous rebounds! She also had the play of the game when a Hoosier had the ball and was going up for a shot. McDonald sneaked inside, executed a lightning-quick “Gimme dat!” steal, and streaked down the court for an and-one lay-up.

Arizona entered the fourth quarter up by two and won going away, by 13.

Before that “going away” part, there was some serious drama. Driving to the basket, McDonald turned her ankle. It was ugly in real time and got increasingly uglier with each successive slow-motion replay. She was helped off the court, got it taped up, but remained on the bench for a time. When Arizona was having trouble bringing the ball upcourt against the Indiana press, McDonald went back in and immediately took over the game. It was Magical (as in Johnson).

There will be the unavoidable comparisons to the 1988 men’s team that made Arizona’s first trip to the Final Four. To be sure, some of the comparisons are striking. That team reached the ultimate national stage in only Coach Lute Olson’s fifth year in Tucson. For the women’s team, it’s Adia Barnes’ fifth year.

But a lot is different. That men’s team returned home after the win in the Elite Eight and got caught up in the whirlwind of one of the craziest weeks in the history of Tucson. The women are safely sequestered in the COVID bubble in San Antonio, which no doubt makes Barnes and her staff extremely happy.

The Cats will face perennial monster Connecticut on Friday (time TBD). UConn has been to the Final Four 13 consecutive years, but who cares? The way the UA is feeling (and has been playing), they’d take on the defending WNBA champion Washington Mystics. Let’s go!

Connecticut survived a brutal showdown with defending national champion Baylor in a game with one of the most controversial endings in recent memory. Down one with seconds to play, Baylor’s DiJonai Carrington was mugged by two UConn defenders as she attempted what might have been the game-winning shot, but no foul call was made and the Huskies advanced to face Arizona.

Those of us who were fortunate enough to be in these parts in the spring of 1988 remember the community-wide fervor. It was one of the hottest springs in Tucson history and the fever-pitch adoration of the Wildcats just turned everything up another notch. Lute Olson and Sean Elliott—the GQ coach and the hometown-kid-turned-superstar—absolutely owned this town. They could have run for co-mayor and won in a landslide.

It seemed that everybody in Tucson was sporting a red Final Four T-shirt. (According to a lost theorem by Pierre de Fermat, 37% of people who bought those shirts 33 years ago still have them in a drawer somewhere.) I have a friend who is in the shirt-making business. He and his crew worked around the clock, starting the minute that the UA dispatched North Carolina to advance to the Final Four. They were churning out thousands of shirts a day, all under the watchful eye of an observer from the NCAA whose job it was to make sure that no “cleans” went out the back door. Had I been my friend, I would have found it incredibly insulting, but with the NCAA, at all times, bidness is bidness.

That entire week leading up to the Final Four game against Oklahoma was a blur. The players were swarmed on campus when they tried to go to class. Every sports media outlet in the world wanted 10 minutes of Olson’s time. Thousands of people showed up to watch the Cats board the bus a McKale on the way to the airport. It was deliciously crazy.

On Game Day, I went to the grocery store about an hour before tipoff. It was like something out of a Cormac McCarthy novel. No cars on the street, no shoppers in the store.

It didn’t end well. Steve Kerr had the worst shooting day of his career, hounded by Oklahoma guard Mookie Blaylock. (Odd fact: The bad Pearl Jam was actually named Mookie Blaylock before they changed their name to Pearl Jam.) Even worse, Oklahoma, spent by the emotional win over Arizona, would go on to lose in the championship game to a so-so Kansas team.

Arizona fans still love that team more than any other, including the 1997 team that came out of nowhere to win the National Championship. And 30 years from now, those of us who have been blessed to watch her perform her uniquely badass form of basketball magic will utter the name of Aari McDonald with joy and 13 different kinds of respect. Coach Adia Barnes is quite young in coaching terms. She should have many more championship runs in her, but this one will always be the first and will always be special.