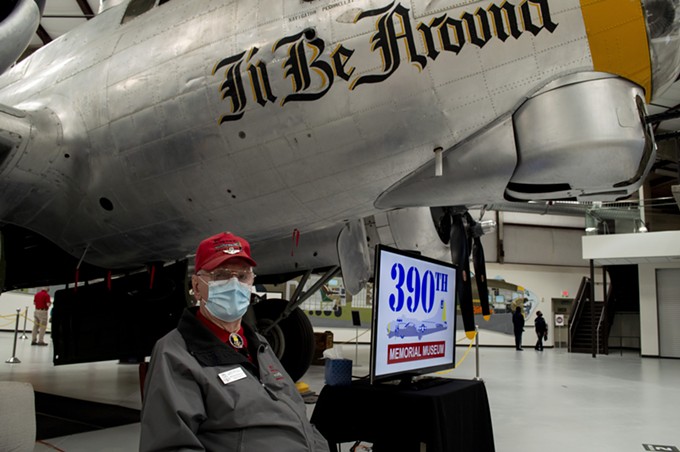 Col. Richard Bushong celebrated his 98th birthday at the 390th Memorial Museum, where he has been volunteering for 29 years.

Bushong turned 98 on March 21 and was surprised at the size of the celebration at the 390th Memorial Museum on Thursday afternoon.

“I’d thought they had a birthday cake, but they can’t put 98 birthday candles on it,” said Bushong as he sat under the B-17 bomber he piloted during WWII.

Bushong first took his oath in April 1943 and went to the Army Air Force Air Service Command Central Test Pilot School in Nashville, where he specifically requested to be a B-17 pilot.

“It’s something I wanted to do, I volunteered for,” said Bushong.

By November of that year, 20-year-old Bushong was a pilot in the 390th Bombardment Group of the U.S. Eighth Air Force, flying into Nazi Germany. He was one of the first pilots to perform daylight bombing missions.

He remembers with astounding clarity the nine missions he flew in March 1944, including the first “full daylight raid on Berlin” on March 6.

Bad weather on March 4 forced the mission to be recalled. But part of the wing continued to the target, disregarding the recall and “therefore telling the Germans we were coming to Berlin.” By March 6, the Germans had moved all their fighters to the northern part of Germany.

Bushong said they faced 600 enemy airplanes and he saw about half of them.
“That was scary when the enemy airplanes would be coming at you,” said Bushong. “There was a lot of bullets flying globally.”

He said they lost 69 heavy bombers that day and 349 of the ones that made it back could not fly the next day.

They wiped out the target, an electrical equipment manufacturing company that Bushong discovered 15 years ago was owned by Bosch.

“They’re still making stuff, but I can guarantee you they’re not making it in that factory,” said Bushong to roaring laughter from everyone joining in the celebration.

He said he got back the same day, with his plane all shot up.

“I never got back without holes in the airplane, but I got back and survived and went again on the 9th of March, back to Berlin.”

He corrected the board in the 390th Memorial Museum, which said they had made four trips to Berlin. He said they only made two; the other two never made their target.

Bushong said that during his time working at the museum he’s learned more about what he did during the war than he did when was flying.

Col. Bushong completed 28 missions during WWII, despite being told he would only fly 21 missions and then he could go home. For his final mission, Bushong earned the Distinguished Flying Cross for bringing his plane and crew home safely. During that mission, Bushong lost two engines and with the other leaking oil was still able to return to England. To make matters worse, he found on arrival his brakes had failed, but “thanks to good old English Mud” as Bushong likes to say, they landed safely.

He continued to serve after the war as a member of the Air Force Reserves, returning to active duty during the Korean War and performing air defense during the Cold War. Bushong also completed a one-year tour of duty in the Vietnam War, where he flew F-4 Phantoms.

“Thirty-two years and eight days and I liked every minute of it. It was a great, great career,” said Bushong.

At the birthday celebration, Bushong received a commendation from Gov. Doug Ducey’s office; a virtual call from Sen. Mark Kelly; and proclamations from various towns, including Sahuarita (near where Bushong lives in Green Valley), Marana and his hometown of St. Marys, Ohio.

“He's an American hero, represents the best of us, a member of the greatest generation and we wanted to make sure that we were here to wish him a happy birthday and celebrate with him and his family and this amazing community on his accomplishments,” said Juan Ciscomani, senior advisor for regional and international affairs for the Governor’s Office.

“He served in both conflicts,” Honea said. “What an honorable man.”

Bushong also heard from his fellow airmen. Col. Brian Grasky, commander of the 214th Attack Group in the 162nd Wing of the Arizona National Guard, was on hand to represent the men and women of his wing, and said he was honored to follow the contrails of Bushong and could not imagine doing what he had done.

Bushong retired from the Air Force in 1974 and moved to Green Valley in 1987. A year later he walked into the 390th Memorial Museum and looked up at the tail of the airplane and said “Well I’ll be damned, that’s the outfit I was in in WWII.”

Bushong said he gave his name to a museum employee who looked Bushong up in the museum's records. The colonel paid $30 to become a member of the museum and started working there in 1992. Last week, he realized he had been working there for 29 years and said he’d retire in another decade.

Despite a fight against COVID-19 and heart stent replacement two weeks ago, Colonel Bushong continues to arrive at work every Thursday and educate others on WWII.

“He lives in our community and really helps teach the future generations,” said Sahuarita Mayor Tom Murphy, a veteran himself. He thanked the museum for honoring Colonel Bushong, “because sometimes we do these honors after people have passed.”

According to the U.S. Department of Veteran’s Affairs, 263 veterans die every day and only 2% of WWII American veterans are alive today.