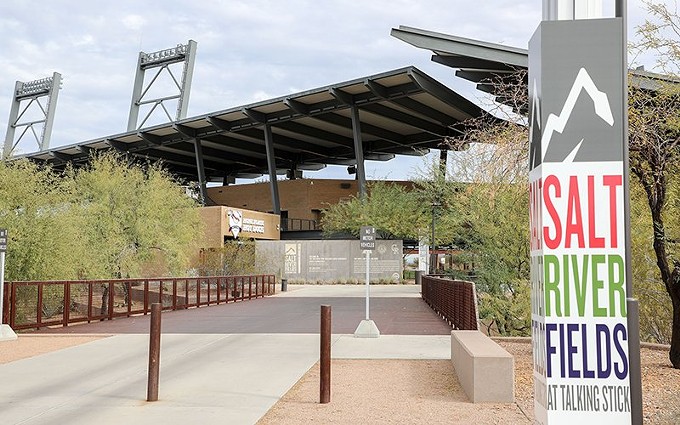 Alina Nelson/Cronkite News
The Arizona Diamondbacks and Colorado Rockies have yet to release specific information about spring training tickets.

Tickets are selling out fast at the Valley’s Cactus League stadiums, where 15 major league teams are based during spring training. With attendance limited this year because of the ongoing COVID-19 pandemic, seats are scarce.

At least four Cactus League teams already are sold out for the spring, including the Arizona Diamondbacks, who sold out their games within 24 hours of tickets going on sale.

“The fact that it sold out as fast as it did – that fires me up,” Arizona manager Torey Lovullo said. “We’ve been looking forward to this day as much as them.”

Now, Arizona fans will have to rely on third-party ticket sites like StubHub or search for tickets at other stadiums when the Diamondbacks are playing away from Salt River Fields.

The Colorado Rockies, who share Salt River Fields with the Diamondbacks, are also sold out. The Los Angeles Dodgers sold out their tickets in less than two hours. The Chicago Cubs were nearly sold out as of Monday, with only a few left for accessible seats, which are for fans needing wheelchairs or other mobility devices, or for those accompanying them.

And four teams have not put single-game tickets on sale as of yet.

The Seattle Mariners put single-game tickets on sale Wednesday at 9 a.m. There will be fewer than 2,000 tickets available for each game and fans will be grouped in assigned pods for social-distancing purposes. All ticket information is available on the Mariners’ website.

According to the San Francisco Giants’ website, the City of Scottsdale will allow 750-1000 fans to attend each game at Scottsdale Stadium. Season ticket members will have first priority in purchasing tickets, and seats will be sold in pods to allow for social distancing, according to the website.

Fans will still have to adhere to health and safety protocols when attending Cactus League games. Masks will be required except when eating or drinking, and seating will be in pods of two, four, and six seats.

Spring training was cut short in 2020 when the pandemic struck, and MLB’s 30 teams played a shortened regular season and playoffs without fans.

Now, at least for the lucky few who can find tickets, live baseball is back.