Tucson Mayor Regina Romero has proposed replacing Council Member Paul Durham with former Ward 3 Councilmember Karin Uhlich, who served three terms on the council between 2005 and 2017, when she decided against seeking reelection.

Durham announced earlier this week that he would resign on March 1 rather than complete the final year of his term. Durham took a leave of absence from the council in September to care for his husband, who is suffering from terminal cancer. 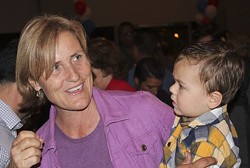 Romero has called a special meeting of the council on March 1 to appoint someone to finish out the remainder of Durham's term.

“Karin has previously been elected by the residents of Ward 3, knows the neighborhoods, understands city government, and can step into the role without a learning curve, which is particularly valuable during these unprecedented times,” said Romero in a prepared statement. “Council Member Durham and I believe Karin is the best choice, and we wanted to propose this early ahead of the March 1 special meeting to help ensure a smooth transition and avoid uncertainty. I also believe that we should not appoint someone who is running for the Ward 3 seat to avoid the perception of tipping the scale for any one candidate.”

Durham said he was on board with the plan.

"I support the nomination of Karin Uhlich to serve the remainder of my term,” Durham said. “Karin knows the issues facing Ward 3, and will be able to step in and work with my staff to ensure the continuity of services. It has been an honor to serve the residents of Ward 3, and I know they will be in good hands with Karin.”

Uhlich moved out of Ward 3 during her final term in office, but she told The Weekly on Wednesday that she has since moved back into the ward.

Uhlich said she would not seek election to the Ward 3 seat later this year.

Juan Padres, who ran against Pima County Supervisor in 2020, has said he is interested in running for the seat later this year.