As Pima County prepares to provide COVID-19 vaccines to a much wider segment of the population this week with a limited number of vaccines on hand, the county health department has announced its plan to prioritize the vaccination of specific segments of the hundreds of thousands of individuals who qualify.

“We are in a very vaccine-constrained environment right now, but we do not want to be in an administrative and distribution constrained environment,” County Health Director Dr. Theresa Cullen said at a press conference today. “So we challenged ourselves - it was only 10 days ago - to figure out how to give 300,000 vaccines in three months.”

Phase 1B of vaccine rollout includes prioritized education and protective service workers, essential workers in fields like transportation and government, adults in congregate settings with high-risk medical conditions and individuals over 75.

However, the 1B phase will be divided into sub-segments of 1B.1 and 1B.2. The 1B.1 group includes those over 75, teachers and childcare providers and prioritized protective service workers such as law enforcement and emergency response staff. 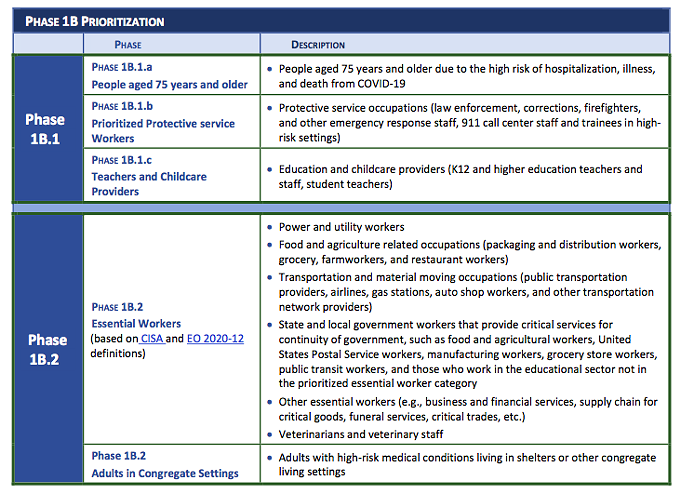 Those who qualify under 1B.1 can register to receive vaccines as the registration websites become available. According to Pima County Communications Director Mark Evans, the first two registration sites for Banner North and Tucson Medical Center will go live Thursday. Both locations prioritize the 75+ population.

In addition to the Banner North and Tucson Medical Center vaccination centers used to provide vaccines to group 1A beginning in December, Pima County is adding Kino Stadium, the University of Arizona, Tucson Convention Center and Rillito Racetrack as vaccine sites.

The county asks those in the 75+ age group to receive their vaccinations at Banner North, Kino Stadium or Tucson Medical Center. Teachers should go through The University of Arizona and protective service workers should register at the Tucson Convention Center.

Evans said the registration site for Kino Stadium will go up Monday, while Tucson Convention Center and the University of Arizona sites will go live next week. An exact date has not been announced.

Rillito Racetrack will open as a vaccine site in “February or late January” for any remaining individuals in the 1B population, County Administrator Chuck Huckelerry wrote in a memo attached to the county’s new immunization plan.

In the first weeks of vaccine rollout to the 75+ population, those over 85 will receive vaccines the first week, ages 80-84 the second week and ages 75-79 the third week. All individuals over 75 can receive the vaccine throughout 1B, which the health department estimates will last until the end of March, Huckelberry’s memo stated.

The 75+ group is being prioritized because COVID-19 infections among this age group are more likely to result in death, Cullen shared.

The county is working on setting up a call line for those without computer access, according to Cullen.

Those in group 1B.2, such as power and utility workers, state and local government employees and transportation workers, may have access to the vaccine by March depending on vaccine availability, according to the health department’s COVID-19 Accelerated Immunization Plan.

Will there be enough vaccines?

But with only 12,000 vaccines administered to Pima County weekly, the county is relying on larger future allocations to vaccinate what Cullen estimates to be 150,000 individuals in 1B’s priority group of those 75 and older, prioritized protective service workers and educators.

“If you do that math, we're obviously two and a half months before we get through this group. However, we do anticipate that there will be acceleration of our vaccine delivery,” Cullen said. “On the website, once we reveal it, you will see additional information about how you will register to get a vaccine and who can be vaccinated.”

“If we get additional vaccine, I think delays will be small . . . if we only get 12,000 shots a week, we're looking at a high number of weeks before we get through this population,” Cullen said.

Pima County Chief Medical Officer Dr. Francisco Garcia anticipates vaccine supply in the county will soon increase. Ultimately, the time it will take to vaccinate the priority and non-priority populations in group 1B depends on the number of vaccines available.

“We have reasons to believe that the vaccine supply is loosening up every day, and perhaps as early as today. If we have access to adequate vaccine supply, we will cover the population that needs to be covered in a very, very short period of time. So I think that the main message here is our plan is ready to achieve the levels of population coverage that are needed to provide safety in this community over the next three and six months. But the key thing is the vaccine supply.”