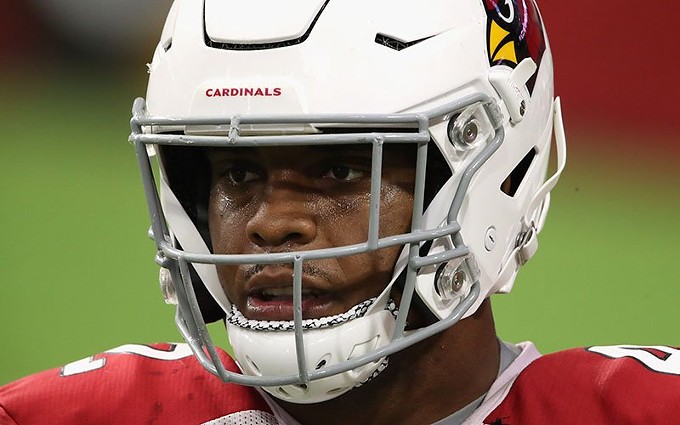 
PHOENIX – Amid an otherwise relaxing Halloween weekend, Kliff Kingsbury’s biggest scare proved to be breaking news on the virus front, not spooky costumes. And this time, it hit home hard.

Two Arizona players tested positive for COVID-19 during the team’s bye week – starting outside linebacker Devon Kennard, who revealed on Twitter that he had been infected, and second-year cornerback Byron Murphy. Both are homegrown products.

Kingsbury did not disclose the identity of the players who tested positive, but their names were placed on the team’s reserve/COVID-19 list, and will remain there until satisfying league protocols.

“It wasn’t a matter of if, it was a matter of when this would occur,” Kingsbury said Monday morning. “There (were) a couple positives, and luckily the contact tracing was limited and yesterday’s test results were all negative, so we’re just moving forward with that protocol and taking it from there.”

Kingsbury said it would be “business as usual when it comes to practice” Monday, which means the Cardinals will try to stay on track as they prepare for the suddenly daunting Miami Dolphins, who thumped the NFC West-contending Los Angeles Rams on Sunday.

Still, the roller coaster of emotions that could follow an outbreak could potentially put a damper on the upbeat spirits Arizona took into the bye week.

Kingsbury believes it is imperative that Cardinals players and coaches avoid being distracted and press on.

“As these things pop up, we have to be able to continue to move forward,” Kingsbury said. “We can’t let it affect our mentality or how we approach the next week’s game.”

It’s worth noting that Kennard, a prep superstar from Desert Vista, missed action in back-to-back weeks earlier this season when he suffered a calf injury that opened the door for Dennis Gardeck and Kylie Fitts to earn increased playing time.

The return of linebacker Markus Golden, who tallied 10 sacks for the New York Giants in 2019 and was dealt back to the desert days before Arizona’s victory against the Seattle Seahawks, gives the Cardinals another option.

Murphy’s status is perhaps even more noteworthy because of his stellar play in the Cardinals secondary as of late. The former Saguaro High School standout racked up 10 tackles, two for loss, one sack and a pair of passes broken up in his last two outings.

There is optimism that Arizona’s outbreak was caught early and contained quickly. Players were required to make daily trips to the Cardinals facility in order to undergo normal testing, despite a stretch of several days away from practice.

“I think just by the nature of guys having to stay in town to get tested will be good for our focus and continuity,” Kingsbury said. “So, I don’t see this being a (long-term) problem.”

It was an unusual weekend for Kingsbury on a variety of fronts. He expected trick-or-treaters to pass by his Paradise Valley bachelor’s pad to devour assortments of candy over the Halloween weekend and wound up leaving bowls of goodies outside to appease passersby.

Kingsbury said he thought the holiday was canceled because even his neighbors, who customarily celebrate, appeared to take the night off.

What happened to the Cardinals isn’t unusual in an unusual season, although recent history doesn’t suggest there is always a quick fix available.

A clash between the Pittsburgh Steelers and Tennessee Titans in the season’s fourth week was moved from October 4 to October 25 because of a massive outbreak in the Titans camp.

In a domino effect, Buffalo’s Thursday night contest with the Chiefs had to be rescheduled for the following Monday because the Bills had unexpectedly played just two days earlier.

The list goes on. Teams across the NFL have had to be flexible. Even Arizona had previous experience in this department.

“We knew that we were going up against the virus this year, as well as playing football teams. And we knew at some point this would be something that we would have to deal with, so it is what it is,” said Cardinals veteran offensive lineman Kelvin Beachum.

And, so it has been.

Wide receiver KeeSean Johnson landed on the Reserve/COVID-19 list just prior to the beginning of the regular season. He has since recovered, and has three catches for 29 yards in a pair of appearances.

Arizona also briefly feared their game against the Jets in Week 5 might be affected when reports surfaced that a Jets player had tested positive and the team’s facilities were shut down. The Cardinals ultimately made the trip and played the game after the player’s re-test reportedly came back negative.

“I think one thing that it certainly does is it reinforces that everybody has to be careful (and) take the proper precautions when (they’re) outside of the building,” said Corey Peters, a captain and seasoned Cardinals defensive tackle. “When we leave the building, we’ve got to do a better job of trying to be as safe as possible.”

“Obviously, you can’t remove all instances of danger. By taking the smart steps and trying to make sure we’re distanced here at work, or separated wearing masks; making sure we’re cleaning properly … we can try to minimize those things. And at this point, I’m hopeful that we’re going to have a complete season.”

Kingsbury was adamant that a scenario such as the one the Cardinals are in was inevitable. It had been discussed since July and throughout Arizona’s training camp. It’s something that most teams are likely to deal with as the season progresses and cold weather sets in — medical professionals believe that flu season could complicate COVID-19 testing procedures because symptoms can be eerily similar.

The Cardinals are determined to be prepared.

“It’s how teams handle it the best,” Kingsbury said. “Those teams are going to be at the top of this deal.”