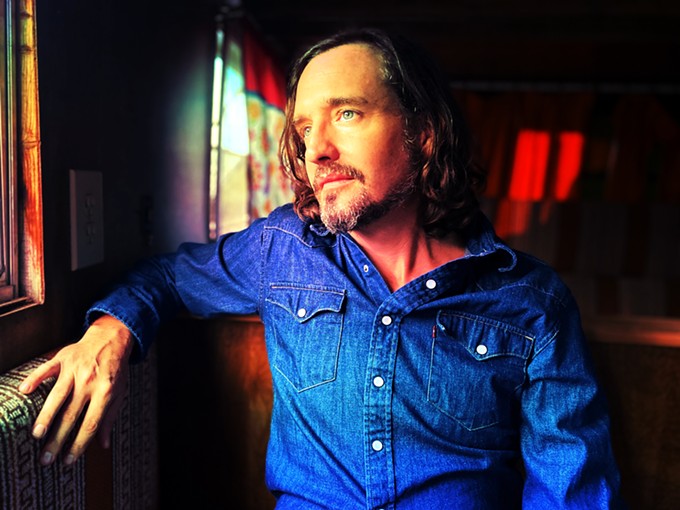 The Sonoran Desert Serves as a crossroads of culture and climate, but a new album from local folk group Desert Angels takes that concept to the next level—or plane of existence.

Self-described as a "psychedelic folk symphony," Polychromatic Transmission is a collection of desert-inspired folk with a lyrical twist; while many of the instrumentals are pleasant and pastoral, the subject matter ranges from paranormal to the transcendental. Inspired by a UFO sighting outside of Safford in 2008, the "cosmic Americana" record falls somewhere between Leonard Cohen and Art Bell.

If all of that sounds a bit too far-out for the average listener, fear not. The first few guitar notes of the opening track "Miracle Girl" are as inviting as any acoustic borderlands tune, but the melody has enough mystery to keep things interesting. For as spacey as the album's concept is, lead vocalist Stuart Oliver's first few lines are surprisingly familiar: saloons, highways, singing the Eagles. But as is the nature of Polychromatic Transmission, a surreal concept hides behind the folksy veneer: The song came to Oliver, fully produced, in a dream.

"I feel like the organic elements really ground it," Oliver said. "Things have to be organic to be well balanced. I wanted to combine folk, which is an ancestral tradition, with where we're going, which is the sci-fi element."

The album continues with more singer/songwriter ballads fit for the warm open road, lush with violin, banjo, harmonica, drums and mandolin. As each song passes, the esoteric elements begin to arrive.

The track "Wave of Grace," for example, is about as optimistic as a song about the apocalypse can be, featuring soothing keyboards and carefree percussion, as Oliver sings "The change we knew would come to pass has relieved our earthly burdens at last / From the scattered we've now become one... We're riding on a wave of grace as the ocean takes the world."

"I'm trying to convey that feeling of raising consciousness by being out in the desert: eco-psychology, nature-based therapy, the transcendent experience of being in the desert," Oliver said.

While the album's production, courtesy of Oliver, is clean and bright, a mention must go to Angela Osbourne, Annie Hawkins, Luci Figueroa and Kate Becker, who provide layers of smooth background vocals throughout the album.

The production also houses much of the album's subtler psychedelic elements. The track "Cherokee Victory Song" begins with layers of ambient flutes before being kicked to life with drums, piano, distant shouts and Oliver's commanding voice, a swell not unlike what you might hear in a Fleet Foxes or Strand of Oaks track.

That track, and the proceeding "Take It As It Comes," draw heavily from Oliver's childhood in North Georgia, an introspective style that works as an extension of Desert Angels' previous album, 2013's Sheddin' Every Skin. While Sheddin' Every Skin features similar instrumentation and song structures, Oliver says Polychromatic Transmission highlights his heightened production skills, and benefits from "a lot of spiritual learning" since 2013.

The album closes with the tracks "Messages In The Clouds" and "Marfa Lights," two of the most lyrically out-of-this-world tracks, though they maintain folk roots. "Messages In The Clouds" makes explicit reference to an alien abduction, but does so optimistically—the gorgeous group vocals and vast instrumental certainly help. These final songs best exemplify the album cover: a musician framed against the desert sunset, with subtle colors radiating down from the sky.

"The veils are thin in the desert," Oliver said. "I love the combination of cowboy and hippie here. The limits that apply in other parts of the country and world just don't apply here. It's like the desert is full of portals. It's very healing, and ultimately that's what I'm trying to convey with this music."

Ultimately, Polychromatic Transmission is an album looking to subvert the narrative of UFOs. Idle listeners may not pick up on the paranormal references at all, instead being sidelined by Desert Angels' clean acoustic ballads—and that's the point. To Oliver, the extraterrestrial isn't a subject to be feared. For him, there is a surprising overlap between muse, angel and alien.

"The title is referring to this multifrequency transcendence, how every color is important to evolving, and every aspect of that is involved in raising consciousness," Oliver said. "Hopefully that doesn't sound too grandiose. Maybe I've spent too much time in the desert."