Photos © Robin Silver
New photos show the Trump Administration's border wall constructed across the San Pedro River, formerly the last major free-flowing river in Arizona. The photos, taken where the San Pedro crosses into Mexico from Cochise County, were shot by Robin Silver, co-founder and board member of the Tucson-based Center for Biological Diversity.

The wall's construction has proved controversial in Southern Arizona, prompting one of the largest political demonstrations in Cochise history against the destruction of the San Pedro floodplain. In addition, local governments officials have expressed frustration over the lack of communication by the Department of Homeland Security regarding construction specifics.

One of the main concerns about the construction is its impact on wildlife. According to CBD, the wall is blocking one of the best remaining wildlife corridors in the region, and is likely to clog the river with debris during monsoons. 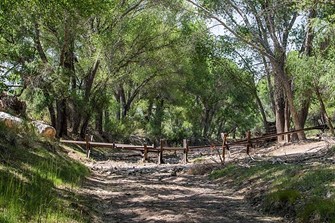 At a February board meeting, the Cochise County Board of Supervisors approved a letter supporting Kirkpatrick's efforts encouraging DHS to engage with local agencies and the general public to offer information about their border construction. According to the Board of Supervisors, Cochise County had "not been made aware of, or consulted on, any site plans or construction timelines."