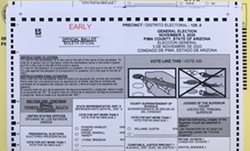 As early ballots arrived in mailboxes across Pima County this week, registered Democrats are concerned about a suspicious text alerting voters they’re not registered as permanent mail voters—when in fact, they are.

The Pima County Recorder's Office even issued a warning to not open the text’s link to a Vote.org page on their Twitter account Thursday, Oct. 8, suspecting it could be fraudulent.

Registered Democrat Kristi Williams was perplexed by the text she received around 3 p.m. on Thursday saying she was not a permanent mail voter. When she opened her mailbox moments later, there sat the sage green envelope containing her early ballot.

“I was confused at first. I’ve been doing early voting for many years so I was shocked by the text,” Williams said. “I was also worried after seeing the link in the text that someone was trying to fish for information and trying to make it so my vote didn’t count.

Williams forwarded the text to her husband, Pima County Superintendent of Schools Dustin Williams, who warned the Pima County Democratic Party and officials at the County Recorder's Office.

Turns out the text was sent by Oakland-based Resistance Labs, a political text-bank that supports progressive grassroots causes and candidates. The organization was helping facilitate early ballot registration texts for another group, Vote From Home 2020. Resistance Labs CEO Yoni Landau responded via email that his organization sends out tens of millions of texts a day and errors are inevitable.

“Our data is over 90 percent accurate,” Landau wrote. “We reach out beforehand to the Sec. of State staff in good faith before we start texting. We also immediately paused our texting and changed our script as soon as the Pima County staff let us know there was a problem with a link and with the data source.”

Landau estimates no more than 2,000 Pima County Democrats received the text since the company did not receive complaints from their texters, he wrote.

The episode highlights heightened concerns about disinformation regarding early ballots, which growing numbers of Arizona voters have embraced in recent decades. More than three out of four voters cast ballots by mail or by dropping their ballots off at polling stations in 2018 and that number is expected to grow this year with voters avoiding polling places because of the risk of contracting coronavirus.

In an email, Vote.org Director of Programs Sydney Rose wrote, “There are many organizations who use our tools and this is an example of them linking to our resources within their messaging.”

Vote From Home 2020 has a goal of contacting 393,000 Arizona voters during the 2020 election, according to their website.

The Pima County Recorder’s Office recommends contacting them at 520-724-4350 if you receive suspicious texts and phone calls during the election year.