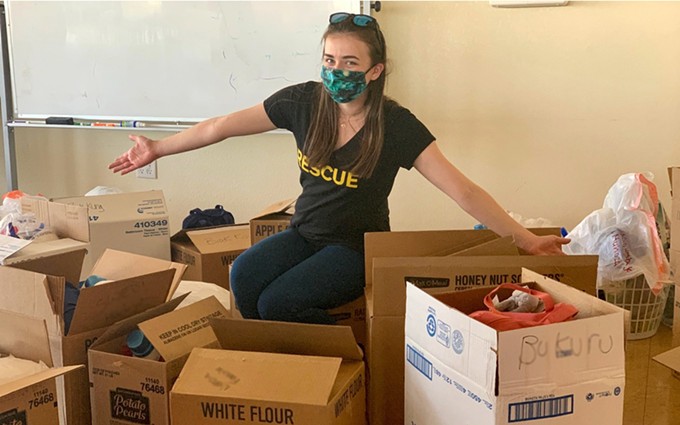 Bridget Ott, a senior health caseworker, prepares care packages for refugee families in Phoenix. Emergency care packages have been delivered to about 3,000 individuals in both Phoenix and Tucson since March. (Photo courtesy of International Rescue Committee

PHOENIX – Refugees living in Arizona are struggling to navigate the impacts of COVID-19. In response, nonprofit organizations boosted assistance programs after they noticed more refugees losing their jobs or having their hours cut. Families say they also are struggling with complicated government aid applications written in a language in which they may not be fluent.

There are 82,982 refugees in Arizona, according to the latest numbers by the Arizona Department of Economic Security. Refugees make up less than 1% of Arizona’s total population of 7.3 million.

But many refugees work in the sectors hardest hit by the pandemic, which makes it more challenging to make ends meet, according to Stanford Prescott, the community engagement coordinator for the International Rescue Committee. The nonprofit helps resettle refugees across the country and has an office in Phoenix.

Organizations such as the International Rescue Committee, Iranian American Society of Arizona, and the Refugees and Immigrant Communities for Empowerment, or RICE, have stepped in to help bring crucial information and resources to refugee families in need.

“In the past few months, I would say roughly 1,000 refugees coming in needed unemployment and assistance,” said Dominic Braham, the executive director of RICE, a nonprofit based in Phoenix. Since its establishment in 2017, RICE has focused on helping refugees and immigrants become financially self-sufficient.

“We are kind of the last hope for them and don’t want to just turn them away. We want to find solutions,” Braham said.

One main way these organizations are helping is by giving small grants or loans and providing necessary care packages and resources to families.

“By April, about 75% of the refugees that we’ve resettled in the past year or two, they had lost a job or suffered another loss of income,” Prescott said. “And so while many Americans and many Arizonans lost their jobs, the effect was almost an order of magnitude greater in the refugee community.”

The Iranian American Society of Arizona, based in Scottsdale, has helped 50 families with one-time $250 grants or interest free loans of up to $1,200 for their rent or bills. The loans have to be paid back within one year, and the grants don’t have to be paid back at all.

Malie Malihi, the director of outreach programs at the society, shared a story from a Somalian refugee who lost her car-rental job because of COVID-19. The refugee asked to remain anonymous when she shared her story with Malihi.

“I have three children and had to put food on the table for them. I wasn’t able to pay my bills for two months. I was very worried,” the refugee wrote. “For the last three months, I went to the center a few times and picked up the groceries. They also paid $250 for my utility bill.”

The International Rescue Committee also has assisted with getting basic necessities for refugee families. Since the beginning of the pandemic in March, they have helped about 2,250 people each month with COVID-related needs, such as food boxes, unemployment applications and more.

“We did care packages, we provided food and toilet paper and all sorts of other things that they needed as basics, as well as some cash assistance to help with things like rent and utility,” Prescott said.

But the financial troubles for refugee families may only be growing because they are having to deplete their savings – if they have any – faster than they can replenish them, Malihi said.

“What I see is just getting worse and worse because even if they had a little saving or they have some resources, they already used that. I see more people now need help to pay their utilities, to pay for their food because they already used whatever they had,” she said.

Many refugees are seeing their hours cut or losing their job outright, which can be tough for refugees because they typically work in entry level jobs, Prescott said.

“Refugees often end up working in certain industries with their first job until they get their feet under them,” he said. “And those industries are transportation, hospitality, food service. Those are all industries that have been hit extremely hard by the pandemic.”

The International Rescue Committee received public and private funding to help provide these services to the refugees. But Prescott said those funds were limited, and the committee is looking for more.

Refugees struggle to get COVID-19 assistance

As they cope with the pandemic, refugee families have turned to these nonprofits for critical information about the pandemic and how to slow the spread of COVID-19.

“There’s been lots of COVID ads about wearing your mask. Those are all in English, and sometimes they’re in Spanish,” Prescott said. “But they’re definitely not in Swahili or in Arabic or in Kinyarwanda.”

He added that staff members are translating flyers, videos and any other information that is relevant to the pandemic and are distributing them through Whatsapp text messages so they can be shared easily throughout refugee communities.

Refugees in Arizona can apply for COVID-19 relief programs, such as unemployment benefits, according to the Department of Economic Security. Initial claims for unemployment insurance peaked the first week of April. As of mid-August, there has been a 250% increase in claims compared with 2019, according to the University of Arizona Economic and Business Research Center.

“For a refugee who doesn’t speak English, who maybe doesn’t have access to a computer at home, maybe has never applied for a government application on their own before,” Prescott said. “They may not be digitally literate enough to go to the website and complete the application.”

Braham said many refugees don’t feel comfortable filling out such applications without help because a mistake could be costly.

“If you answer one question wrong because of barriers of English, that can jeopardize your benefits, and so they come in to us to really help them make sure everything’s accurate and they’re getting what they need,” he said.

Although it may seem challenging for the refugees navigating COVID-19, Prescott said, these organizations know that these families are tough enough to get through the pandemic.

“The clients that we have are resilient. They’ve survived tremendous struggles in their own life prior to arriving in the United States,” he said. “And so while we’re helping them overcome all of these barriers and challenges, there’s a lot of character and courage on the behalf of the refugees we serve.”