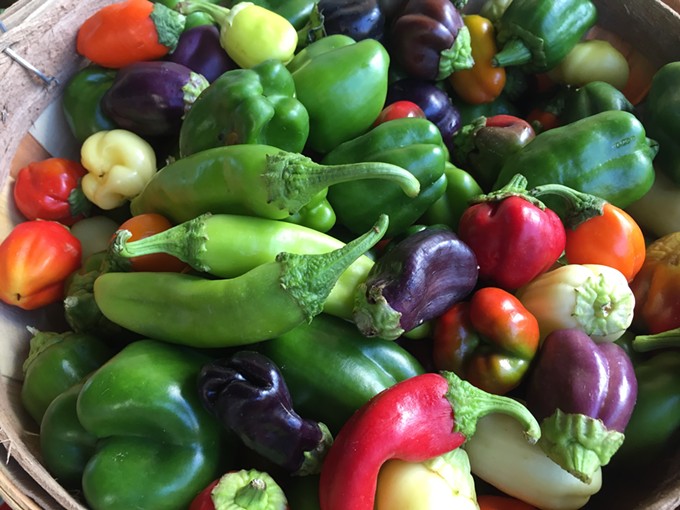 Millions of Americans who are struggling to put food on the table may discover a new item in government-funded relief packages of fresh fruits and vegetables, dairy and meat: a letter signed by President Donald Trump.

The message, printed on White House letterhead in both English and Spanish, touts the administration’s response to the coronavirus, including aid provided through the Farmers to Families Food Box Program, a U.S. Department of Agriculture initiative to buy fresh food and ship it to needy families.

The letter is reminiscent of Trump’s effort to put his signature on stimulus checks and send a signed letter to millions of recipients. It’s the latest example of the president blurring his official duties with his reelection campaign, most prominently by hosting Trump’s acceptance speech for the Republican nomination last week on the White House lawn.

Democratic lawmakers have gone so far as to say the USDA letter violates the federal Hatch Act. The law prohibits government officials from using their positions or taxpayer resources to engage in electioneering. Though the president himself is exempt, the ban applies to White House staff and agencies such as the USDA.

“Using a federal relief program to distribute a self-promoting letter from the President to American families just three months before the presidential election is inappropriate and a violation of federal law,” argued 49 House Democrats led by Marcia Fudge of Ohio in an August 14 letter to Agriculture Secretary Sonny Perdue, requesting information about the purpose and process behind Trump’s letter. “A public health crisis is not an opportunity for the administration to promote its own political interests. Likewise, a federal food assistance program should not be used as a tool for the President to exploit taxpayer dollars for his re-election campaign.”

The White House and the USDA didn’t respond to questions from ProPublica. White House Chief of Staff Mark Meadows has shrugged off Hatch Act concerns, telling Politico last week, “Nobody outside of the Beltway really cares.” (Meadows also said the Hatch Act’s scope was limited to pressuring federal employees on how to vote, but that’s only one of several components of the law.)

Past administrations have observed the Hatch Act with strict firewalls between campaign and official events and admonitions against officials’ making any statements or taking actions that could appear political. The Trump administration, however, has routinely flouted this law. In addition to using the White House for convention speeches by the president and first lady, Trump and other officials also conducted a naturalization ceremony and a pardon as part of the Republican National Convention, and Secretary of State Mike Pompeo delivered a speech from a diplomatic trip to Israel. White House adviser Kellyanne Conway violated the Hatch Act so many times that the independent Office of Special Counsel recommended she be fired. (She wasn’t, and said she’d leave the White House in August for family reasons.)

The letter in the food boxes may not violate the law since it doesn’t explicitly refer to the election, according to the ethics watchdog Citizens for Responsibility and Ethics in Washington. “It doesn’t make it inherently political just because he is a candidate,” a spokesman for the group, Jordan Libowitz, said in an interview. “It’s just one of the benefits of being an incumbent.”

But coming so close to an election, the implication of the letter was not lost on anyone. Some food banks expressed concern that the letter looked too much like a political endorsement, which tax-exempt nonprofit organizations aren’t allowed to make.

“As a non-profit, we would have to take the letter out of the boxes if they were included because we can’t publicly support political candidates,” Mark Quandt, the executive director of the Regional Food Bank of Northeastern New York, said in an email.

Trump’s letter purports to reinforce public health measures against the coronavirus, urging people to follow guidelines from the Centers for Disease Control and Prevention. However, the letter’s advice contradicts the CDC’s actual guidelines on face coverings, which Trump has resisted despite expert consensus. The letter says to “consider wearing a face covering when in public,” whereas the CDC says more definitively, “Cover your mouth and nose with a mask when around others.”

The administration promoted the letter’s debut in a White House press release and a tweet from Ivanka Trump, the president’s daughter and adviser.

However, no food banks surveyed by ProPublica reported actually seeing the letters so far. Some wouldn’t know because they pass the boxes directly to families without opening them, but others do spot checks for quality control and haven’t found any letters. The Greater Cleveland Food Bank said a vendor suggested the letters would start being included in boxes on Sept. 1.

The letters have shown up at some food banks in the Feeding America network, according to Kate Leone, the organization’s chief government relations officer. But they’ve been included inconsistently and without any apparent pattern, she said. “It’s not across the board,” she said.


Aside from the letter, the food box program has come under fire for relying on questionable vendors and failing to match supplies with needs. The House Select Subcommittee on the Coronavirus is investigating the selection and performance of distribution companies that the USDA hired to implement the program, including several that lacked a requisite license to deal in fresh produce.

At least one contract, for $40 million, was canceled; the vendor, Ben Holtz, said he’s still negotiating a settlement with the USDA. Others have been extended or added. Only 70% of vendors fulfilled at least 90% of their orders, Undersecretary for Marketing and Regulatory Programs Greg Ibach testified at a July 21 congressional hearing.

Ibach also acknowledged that the program “underserved” some regions because regional equity wasn’t a factor in the USDA contractor selection.

“Although Congress allocated billions of dollars to distribute food to Americans in need, I am concerned that the Trump Administration’s management of this critical effort has been marred by questionable contracting practices, a lack of accountability, and a failure to deliver food to many communities that need it most,” the coronavirus subcommittee’s chairman, Rep. James E. Clyburn, D-S.C., said in an August 24 letter to Perdue. “Rather than focusing on addressing these problems, the Administration appears to be seeking political benefits from the program, including by inserting a letter signed by President Trump in food boxes.”

Do you have access to information about the Hatch Act that should be public? Email Isaac.Arnsdorf@propublica.org. Here’s how to send tips and documents to ProPublica securely.