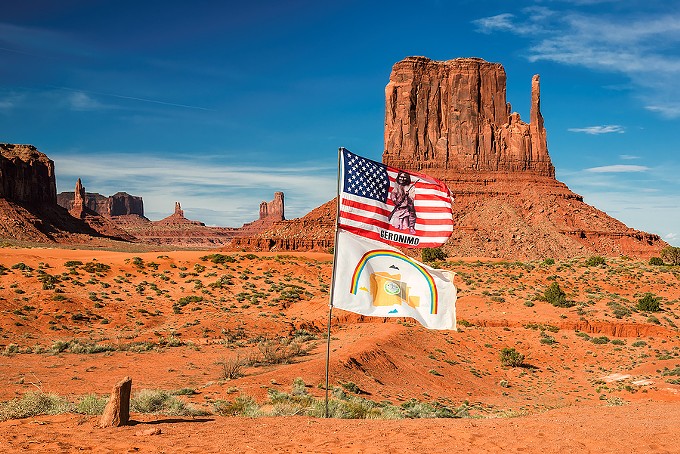 Bigstock
WASHINGTON – Lezmond Mitchell on Wednesday became the first Native American in modern history to be executed by the federal government over the objections of a tribal government for a crime committed between Native Americans on tribal land.

Mitchell, a Navajo convicted of the 2001 murders of a Navajo woman and her granddaughter, was pronounced dead at 6:29 p.m. in the federal penitentiary in Terre Haute, Indiana, the Justice Department said. The execution started at 6 p.m. after last-minute appeals to the courts and the White House failed.

The execution had been strenuously opposed by the Navajo Nation, which normally must allow an execution of a tribal member. Navajo Nation President Jonathan Nez and Vice President Myron Lizer said in a statement Wednesday that, “Our collective voice was ignored.”

“We don’t expect federal officials to understand our strongly held traditions of clan relationship, keeping harmony in our communities, and holding life sacred,” their statement said. “What we do expect, no, what we demand, is respect for our People, for our Tribal Nation, and we will not be pushed aside any longer.”

Mitchell’s attorneys called the execution another chapter in the federal government’s “long history of injustices against Native American people.”

A handful of death penalty opponents gathered outside the penitentiary Wednesday, holding signs and praying as Mitchell was executed by lethal injection.

Mitchell was on death row for the 2001 carjacking and grisly murders of Alyce Slim, 63, and her 9-year-old granddaughter, Tiffany Lee. He and an accomplice stabbed Slim 33 times and cut the girl’s throat twice before decapitating and dismembering their bodies in an attempt to prevent their identification.

The carjacking was pivotal to Mitchell’s case – and execution.

In a normal murder involving a tribal suspect on tribal lands, federal officials must get tribal approval to pursue the death penalty. But a 1994 law created a new class of capital crime – carjacking resulting in death – that courts ultimately said could proceed without tribal input.

Invoking the carjacking charge to get a death sentence for Mitchell “blindsided the Navajo Nation by using this to sidestep the Navajo Nation’s position,” Nez and Lizer said in their statement.

The execution follows years of legal challenges on the grounds of tribal sovereignty, challenges Mitchell ultimately lost. That was followed by more appeals claiming racial bias in the jury that convicted Mitchell, which was made up of one Navajo and 11 white people.

After Mitchell lost his last appeal in the 9th U.S. Circuit Court of Appeals but before he could petition the Supreme Court, the Justice Department in late July set an Aug. 26 execution date.

The Supreme Court late Tuesday denied Mitchell’s appeal and his emergency petition to stay the execution. Mitchell’s attorneys said that left his life “in President Trump’s hands,” referring to commutation requests from a number of groups, including the Navajo Nation.

But no commutation came.

“It’s tragic, but it’s not surprising,” said Matthew Fletcher, professor of law at Michigan State University and director of the Indigenous Law & Policy Center who has followed Mitchell’s case closely.

Mitchell was the fourth man executed on federal death row in the last five weeks. The last federal execution before then was in 2003, but Attorney General William Barr last year ordered the executions resume.

Robert Yazzie, who was the Navajo Nation chief justice during the time of Mitchell’s crimes, said he is troubled by the lack of communication and respect for the tribal government by the federal government.

“This is a matter that should be taken up as a sovereign nation with the United States Department of Justice,” Yazzie said. “Being respectful to each other is something that is, needs to be practiced even more, rather than just to overlook or to ignore Indians as nations.”

Besides the sovereignty issues, he said, the execution is an affront to tribal culture.

Navajo religion and tradition holds that “the whole life’s sacred and you do everything you can to maintain value of a life and not take a human life for vengeance,” Yazzie said.

But Justice Department spokeswoman Kerri Kupec noted that some of the victims’ family members, who were on hand to witness the execution, feel differently.

“Those family members, who are members of the Navajo Nation, have stated on the record that they supported implementation of the sentence returned by the jury and imposed by the court for Mitchell’s horrific federal crimes,” Kupec said in a statement.

Fletcher said the decision to proceed with the execution does not change the big issues facing tribes like the Navajo Nation, but that it “sheds the spotlight on how little the United States … thinks of Indians and Indian tribes, when push comes to shove.”
© 2022 Tucson Weekly