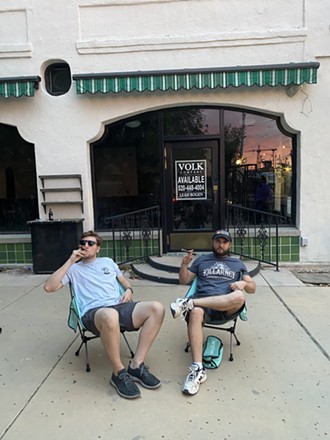 Courtesy photo
Dillinger Brewing co-owners Eric Sipe and Aaron Long.
Downtown Tucson will be getting another fantastic taproom, by a fantastic local brewery in one fantastic location by 2021.

North-central Tucson's Dillinger Brewing Company is opening a second location at the southeast corner of Ninth Street and Fourth Avenue in the former space of The Coronet.

"To have that level of visibility is going to be awesome," Dillinger Brewing co-owner Eric Sipe said.

Sipe and his business partner, Arron Long, said they had been looking for a new space to open a more central located taproom, but the pandemic put the brakes on that—at first. They're excited to be opening a second location in the heart of downtown, according to Long

"This kind of fell into our lap and we couldn't turn it down," Long said. "It the right size for us and it's got a great outdoor area that has great foot traffic."

The two owners still plan on keeping their original taproom open but plan on explaining their brewing capacity, according to Long. While brewing won't take place at the new spot, the owners plan on creating a barrel-aging program in the the space's two 200 square-foot rooms.

"Our current spot is going to host production and brewing atmosphere," Long said. "The downtown location will feature our specials and barrel-aged releases."

Long said the property's landlord has been willing to work with the brewery over concerns of opening during the pandemic, considering Gov. Doug Ducey extended the order to keep bars, movie theaters and tubing events closed until the virus' number decrease.

"We have complete confidence (the landlord) is willing to with us completely in the event at the shutdown lasts longer," Long said. "Every apprehension we was eased by how cool the landlords are being."

Down on the other end of Fourth Avenue on the corner of University Boulevard, Epic Cafe—the hipster coffee house loved by artists, students and aspiring writers—has decided to call it quits due to slow sales during the pandemic.

Owner Kimberly Flagg said she planned on reopening on Aug. 15, but with coronavirus lingering on and uncertainty looming, the owner decided it's better to close the doors and try to sell the late-night hangout spot. Flagg took over Epic Cafe in 2016 when the business was previously experiencing hard times. It's been in business on Fourth Avenue for roughly a quarter century.

"I'm pretty devastated at the moment. We really hoped to reopen on Aug. 15 on the condition the pandemic would be under control, the U of A would be open and doing face-to-face classes, that we would get some more funding to dig ourselves out of the COVID hole," Flagg said. "But it didn't happen so I put the 'for sale' sign up because if somebody could come in and buy it, Epic doesn't die."

Flagg said she's received several offers to take over her lease but only if they can change the concept. That's a non-starter for Flagg.