Out of View: After Public Outcry, CDC Adds Hospital Data Back to Its Website — for Now

Hospitalizations for COVID-19 have been seen as a key metric of both the coronavirus’s toll and the health care system’s ability to deal with it. Recent federal actions may strike a blow to the public’s ability to track them.

The U.S. Centers for Disease Control and Prevention removed from its website, and then restored, data on hospital capacity across the country to deal with the COVID-19 pandemic. But in a note, the agency indicated that the data may no longer be updated because of a change in federal reporting requirements to hospitals.

On Wednesday, ProPublica noticed that the CDC’s website had stopped displaying hospital capacity information, which was seen as a good barometer of whether hospitals in certain states had enough beds to deal with surges in COVID-19 cases. The data showed that more than 70% of intensive care unit beds in some states, including Texas and Arizona, were filled. That had been viewed by some experts as a benchmark for safely reopening businesses.

Looks like @CDCgov national map on hospital capacity is no longer working. A consequence of the data move yesterday to change reporting to @HHSGov? How is less public info a good thing? https://t.co/QQslh3BcSk @ngusletter pic.twitter.com/8ky2K1PnpR


This week, federal officials instructed hospitals to stop reporting data to the CDC and instead report it using a portal created by the U.S. Department of Health and Human Services. They said that the CDC’s data system was antiquated, and that HHS wanted to use this information to help make real-time decisions about testing and shipments of personal protective equipment.

On Thursday morning, when ProPublica confirmed that the information had not been restored to the CDC website up to that point, members of Congress and a former CDC director weighed in to call for more transparency.

“The American people need transparency from the nation’s public health agencies,” Rep. Don Beyer, D-Va., wrote on Twitter. “The Trump Administration has politicized the pandemic response at every step, we simply can’t trust them not to. I am drafting legislation to require CDC to share this information with the public.”

Rep. Judy Chu, D-Calif., said on Twitter, “The Trump administration is trying to hide their failures, but that only makes it harder for us to fight this virus.”

Rep. Jimmy Gomez, D-Calif., wrote: “Want to see @CDCgov numbers for yourself? Yeah, so do I. But @realDonaldTrump and @WhiteHouse have other plans for this #coronavirus data…”

And former CDC director Dr. Tom Frieden wrote: “We’re in the middle of the worst pandemic in 100 years. More than 137,000 Americans have died. Covid is exploding in Arizona, Texas, South Carolina, Florida, and other states. And the administration has chosen to sideline the CDC. Where did this data go?”

The CDC did not respond to a request for comment but posted data from Tuesday on its website around noon Eastern time Thursday, after several media organizations wrote about the removal of the data. At the top of its site the CDC wrote, “Dashboards last updated as of July 14, 2020,” and it included a link to the guidance from HHS that tells hospitals to stop reporting the data to CDC. The CDC site also notes, “IMPORTANT: Data displayed on this page was submitted directly to CDC’s National Healthcare Safety Network (NHSN) and does not include data submitted to other entities contracted by or within the federal government.”

In an interview with journalist Greta Van Susteren on Wednesday, Vice President Mike Pence defended the switch and said, “The American people can anticipate full transparency.”

“This is about making the system better,” Pence said. “CDC will be a part of that, part of the reporting of that, and the American people will have that information. And just as importantly, policymakers that are making decisions about where those critical resources go will have better real time information.”

In a statement to CNBC Thursday, HHS spokesman Michael Caputo said that the CDC was told to post the data again. He said “more powerful insights” will be provided by HHS in the future.

“Yes, HHS is committed to being transparent with the American public about the information it is collecting on the coronavirus,” he told the network. “Therefore, HHS has directed CDC to re-establish the coronavirus dashboards it withdrew from the public on Wednesday.”

The number of people who test positive for COVID-19 has been seen as an imperfect measure of the coronavirus’s toll because of testing shortages and because many infected people do not have symptoms. Hospitalizations, by comparison, are signs of serious cases, and when enough of them happen in one place, they can place the health care system under stress, in terms of beds, staffing and equipment.

In New York City in March and April, the surge was so great that many hospitals had to add beds and transform conference rooms and auditoriums into ICU units.

In Houston, many of the busiest hospitals have asked that ambulances take patients elsewhere because they are so full, and patients have been kept in emergency rooms for hours or days because inpatient beds were not available.

Data from The COVID Tracking Project, which gathers data on COVID-19 from each state, shows that the number of patients hospitalized with COVID-19 has increased in recent weeks, along with the rise in cases. As of Wednesday, more than 56,000 patients were hospitalized nationwide with COVID-19, compared with more than 59,000 in April, which corresponded to the peak in New York and New Jersey. (Some states, such as Florida, are currently reporting their hospitalization numbers but were not doing so earlier in the spring.)

But the data, which is released by states and is unaffected by the federal changes, does not report on hospital capacity consistently, only the number of people in the hospital with COVID-19.

Some states have seen their ICU capacity strapped in recent weeks. In Arizona, for instance, 89% of ICU beds were in use on Wednesday, according to the state. 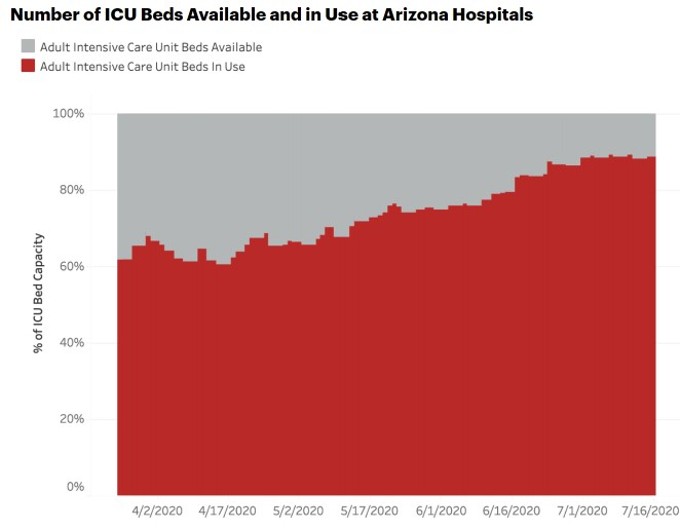 In some Florida counties, fewer than 10% of ICU beds are available. Tennessee, overall, had 16% of its ICU beds available on Wednesday.

And in Texas, the hospital region that includes the cities of Beaumont and Galveston had no open ICU beds as of Wednesday.

Another day in which the Texas hospital region that includes Galveston and Beaumont has ZERO open ICU beds. This is for an areas with population of 1.3 million. pic.twitter.com/20ToLahk6K

Hospitals often operate with most of their beds full and indeed, their business models rely on that. But doctors and health experts say the deteriorating situation related to COVID-19 has caused some to postpone elective surgeries, which are essential for their financial well-being, and poses stresses on their staffs.
© 2023 Tucson Weekly