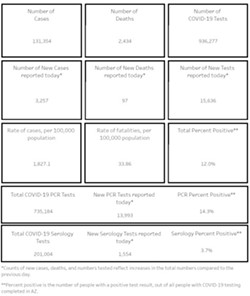 The total number of confirmed coronavirus cases in Arizona climbed past 131K as of Wednesday, July 15, after the state reported 3,257 new cases this morning, according to the Arizona Department of Health Services.

A total of 2,434 people have died after contracting the virus.

Hospitals remain under pressure. The report shows that 3,493 COVID patients were hospitalized yesterday in the state. 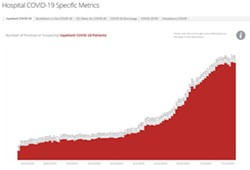 A total of 929 COVID-19 patients were in ICU beds yesterday.

Meanwhile, concern continues to mount about opening schools next month. Despite pressure from the Trump administration to open schools to all students on their regular schedule, some local school districts have announced that they will only offer "distance learning" or online instruction when school starts next month. Unlike in spring, when schools moved online following spring break, districts are planning stricter instructional time designed to mirror traditional in-person classes.

TUSD will launch online classes for all students starting Aug. 10 but in order to avoid losing funding, schools will open on Aug. 17 for any student who wants to attend class in person. However, students will be in "learning spaces" where they will do the same distance learning program that students who remain home will experience. All TUSD families will receive laptops. There will be minimal movement in schools. (More details on TUSD's new plan to come later today.)

Finally, if you'd like a mask, the City of Tucson will give away roughly 56,000 washable ear-loop cloth masks this Saturday, July 18, in six locations across the city.

The drive-thru mask giveaway will have a location in each of the city's six wards with about 8,000 masks available at each location. Individuals and families can drive up to the site and pick up as many masks as they need, while supplies last. You can also walk up or ride your bike through the line.

This event is strictly for distributing masks and is not a COVID-19 testing site. Individuals and families can go to any of the following locations between 7 and 10 a.m. this Saturday to pick up masks.