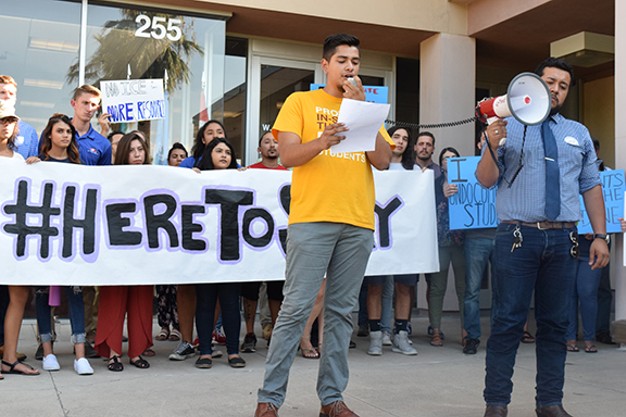 
Today the United States Supreme Court handed down a 5-4 decision that blocked the Trump administration from ending the Deferred Action for Childhood Arrival program.


DACA allows undocumented young adults who came to the United States as children to apply for protection from deportation on a renewable two-year basis. It also gives them the ability to work legally in the U.S. and gain access to health insurance and driver’s licenses. The program was initiated by the Obama administration in 2012.


Former Attorney General Jeff Sessions announced the Trump administration’s plans to end DACA in March 2018. He said the program is “unconstitutional” and would be blocked by the courts if it were to continue.


Around this time last year, the Supreme Court announced they would review three cases that argued the decision to rescind DACA violated the rights of DACA recipients and the Administrative Procedure Act. The challengers (which include states, cities, universities, DACA recipients, civil rights groups, and more) believe that the Trump administration did not provide sufficient reasoning for the action and veiled the decision behind the courts instead.

By using these cases, the argument being deliberated by the nine Supreme Court justices was not whether the Trump administration has the authority to end DACA, but whether the way they went about it was justifiable.


Both sides agree that President Trump does have the authority to end the program.


Justices Roberts, Sotomayor, Ginsburg, Kagan, and Breyer ruled that the decision to terminate DACA violated the APA because the Trump administration did not provide a “reasoned explanation for its action.”


While this provides a clear victory for DACA recipients and their allies, it does not provide lasting, permanent protection for the program. The Trump administration could still rescind it in the future.


Many celebrated the Supreme Court’s decision today but reaffirmed the belief that permanent legislation is needed.


“While this is undoubtedly a victory, the fight is not over and the work continues,” said the Florence Immigrant & Refugee Rights Project in a statement. “Congress must work immediately to pass legislation to provide permanent protection for these young Americans. This is a moral imperative.”


“We knew all along that DACA was lawful and that Trump and Stephen Miller recklessly ended the program for racist reasons and put the lives of 700,000 young immigrants in limbo. I’m pleased the majority of the Supreme Court saw Trump’s actions for the true fraud they were,” Grijalva said in a statement. “This ruling is not the end, and it’s time for Congress to take legislative action to ensure that DACA recipients, Dreamers, and TPS and DED recipients have a pathway to citizenship that they deserve. The House has already passed the Dream and Promise Act, and it’s time for the Leader McConnell and the U.S. Senate to do the same.”


Congressman Tom O’Halleran of District 1 said DACA allows hardworking men and women to receive a college education, find meaningful jobs and give back to the country they call home.


“They are doctors and nurses on our front lines, teachers in our classrooms, and neighbors on our streets,” O’Halleran said in a statement. “Today, the Supreme Court reaffirmed what we already knew: DREAMers are here to stay. I could not be more elated.”


Senator Kyrsten Sinema had similar sentiments. Today she said in a statement that DACA recipients deserve to be recognized as Americans, and she promised to work to find a way to permanently protect this group from deportation.


President Dr. Robert Robbins of the University of Arizona, which educates many DACA recipients each year, said they are proud of their DACA students and see them as an important part of the school’s community.


“The university is pleased the Supreme Court's decision will allow our DACA students to continue pursuing their academic goals with more predictability related to their status,” Robbins said. “We will continue to provide resources through the Immigrant Student Resource Center and continue to support them as they pursue their hope and dreams. We join the Arizona Board of Regents in urging a permanent legislative solution that will provide certainty for DACA students."


To learn more about the Supreme Court’s opinion, click here.