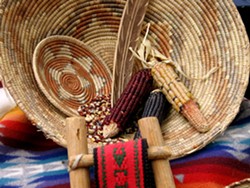 PHOENIX – As the COVID-19 pandemic continues, some Native Americans have found a way to safely host traditional powwows by moving them online.

In many Indigenous communities, powwows are celebrations of culture in which tribes gather to share art, stories, food, song, dance and the company of one another.

But the ongoing pandemic has made it impossible to hold these gatherings safely – in person, anyways. The Navajo Nation, for example, has set curfews and asked the 173,000 tribal members living on the reservation to stay home because 142 Navajos have died of COVID-19 and 4,071 cases have been diagnosed.

“Native peoples have been gathering and celebrating for eons — we congregate and we celebrate. That’s powwows. They’re exceptional social events,” Hebert said.

The group, with more than 180,000 members, goes beyond powwows to create a space where Native Americans share personal stories of graduations and other milestones, the sacrifices of front line workers, and individual struggles and triumphs.

Even in the face of a global pandemic, Hebert was adamant that such events should continue.

“We’ve had this taken away, but we will not be deterred. We’ll find a way,” she said.

Additionally, because in-person sales of arts and crafts are almost impossible, the group’s page hosts a marketplace to promote indigenous artists.

During this time in particular, online powwows serve as touchpoints around a common tragedy: Many indigenous communities have been severely impacted by COVID-19, and long-standing disparities have exacerbated the pandemic’s impact.

Access to running water remains a challenge on the Navajo Nation Reservation, which makes frequent handwashing and sanitation difficult. The illness also has shown severe impacts on those with preexisting health conditions, including asthma and diabetes, which are found disproportionately among Native Americans. Family lifestyles also affect the spread of the disease, particularly in homes with multiple generations under one roof, as many Navajo live, health officials have said.

“Very sadly, several of our members have reported that they’ve lost family to the virus,” Hebert said. “And another thing that dancers do is we pray. We pray for healing. We pray for strength. And we pray for our communities and we pray over our people.”

The online group has gained membership rapidly since the group’s formation on March 17. According to organizers, nearly 60,000 people took part in one early online powwow.