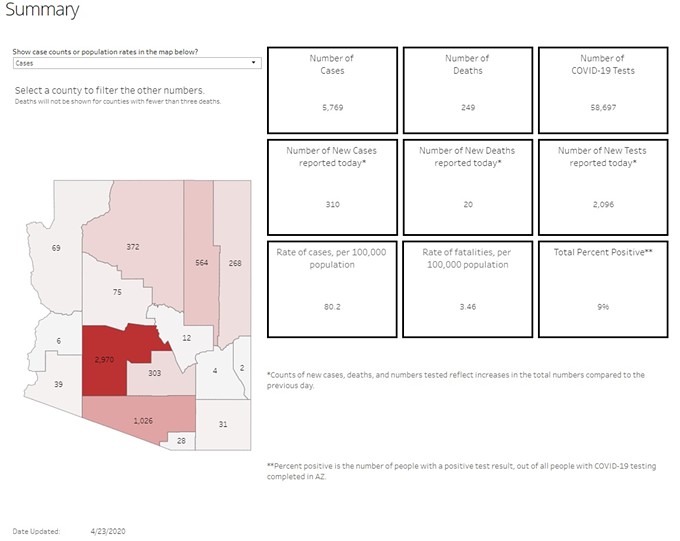 The number of confirmed coronavirus cases in Arizona reached 5,769 as of Thursday, April 23, according to the morning report from the Arizona Department of Health Services.

The coronavirus had killed 249 people statewide, including 70 in Pima County, according to the report.

In Maricopa County, the number of confirmed COVID-19 cases had risen to 2,970.

“We appreciate the passion expressed by Arizonans yesterday, and share their desire to get back to normal as quickly as possible,” Ptak said. Gov. Ducey is working closely with President Trump, Vice President Pence, Dr. Anthony Fauci, Dr. Deborah Birx, Dr. Cara Christ, and state, local and federal health experts to implement the latest guidance from CDC and the White House. Every decision we make will continue to be informed by public health and a commitment to reenergizing our economy when it is responsible and safe to do so.”

Ducey announced yesterday that under certain circumstances, hospitals could return to performing elective surgeries, which had been put on hold over concern of a wave of COVID-19 cases overwhelming health care facilities.

The Senate yesterday passed a new $493 billion relief package Tuesday that included an additional $310 billion for the Paycheck Protection Program as well as $75 billion for hospitals facing the financial strain of the outbreak and $25 billion for additional testing capacity. The House of Representatives is expected to vote on the package today.

The package does not include additional aid to state and local governments struggling with a drop in tax revenues. While Democrats pushed for that funding to be included, it was opposed by Senate Majority Leader Mitch McConnell and other GOP leaders. McConnell said yesterday that it made more sense to allow states to go bankrupt rather than provide them with more federal funding.

Pima County Administrator Chuck Huckelberry said yesterday that he was assembling a task force that would develop strategies for reopening businesses. The Back to Business Task Force will include one appointed member of the county’s Small Business Commission from each supervisor district, and representatives from restaurants, hotels and resorts, chambers of commerce, gyms, daycares, area attractions, film and live performance theaters and event centers.

“The purpose of the Task Force will be to establish a framework of hygiene and physical distancing standards that need to be developed to begin to reopen, in a limited, phased manner, the commercial and business activities that may have been suspended or substantially interrupted during this time,” Huckelberry wrote in a memorandum to the Board of Supervisors Wednesday afternoon.

Tucson City Manager Mike Ortega has warned council members that the city was going to take a major financial hit, but said he didn’t have enough data to make an informed forecast as to the depth of it.

UA President Robert C. Robbins said yesterday during an appearance on Bill Buckmaster’s radio show that he didn’t see football games returning in the fall, although the university would resume face-to-face classes.

Robbins has warned that a return to normal life could months away—or longer. “Until there's a vaccine, we’re never going to be completely risk free,” Robbins said. “That’s probably a year at least before we would have a vaccine.”

Ducey said the state would use the tests healthcare workers and first responders, while Robbins plans to use them to test students, faculty and staff at the university.

In the face of the spreading virus, Ducey has also halted residential, business, and nonprofit evictions; loosened regulations to make telemedicine more available and increased eligibility for AHCCCS, the state's Medicaid program; and activated the National Guard to assist in grocery stores as Arizonans clear the shelves.

Courts have rescheduled most hearings to avoid spreading the virus.
COVID-19 symptoms typically occur two to 14 days after exposure, and include headache, fever, cough, and shortness of breath, according to the CDC. However, some cases of the virus are entirely asymptomatic. Practices to avoid infection include social distancing (of at least six feet), washing your hands, avoiding unnecessary trips, and not touching your face. COVID-19 can survive on cardboard for up to 24 hours, and on stainless steel and plastic surfaces up to three days.
If you think you have been exposed to COVID-19 and develop a fever, cough, or difficulty breathing, speak with a healthcare provider for medical advice. According to the CDC, people who are mildly ill with COVID-19 are able to recover at home. Stay at home and avoid public transportation, but stay in touch with your doctor. If you do leave your home, wear a facemask and clean your hands often. If you develop more severe symptoms (persistent pain or pressure in the chest, confusion, bluish lips) get medical attention immediately. Your local health authorities will give instructions on checking your symptoms and reporting information.

Have you caught COVID-19? Are you feeling ill? Is your small business struggling to make it? Have you lost your job as a result of the outbreak? Are you struggling to manage your kids while schools are closed? Tell us your COVID-19 stories. Send an email or photo to tucsoneditor@tucsonlocalmedia.com.
© 2023 Tucson Weekly