Most dispensaries have adopted social-distancing policies to keep patients a safe distance from each other and sanitation methods such as N-95 masks, latex gloves and liberal use of hand-sanitizer and disinfectant. 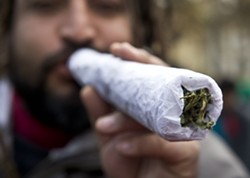 Courtesy of wallpaperup.com
Smoke ’em if you got ’em.
ne, owner of Cave Creek Dispensary, said he has been on the frontlines at the dispensary every day, ensuring proper protocols for the safety of patients, employees and their families.

Lane said he took precautions to ensure his employees can weather the quarantine, providing a $400 bonus for food and supplies, temporarily increasing wages by $3 per hour and allowing employees to take time off as they feel they need it.

Most dispensaries saw a major increase in demand for cannabis during the third week of March, with some reaching record sales over previous years. Fewer than five have closed since Gov. Doug Ducey’s executive order limiting certain types of businesses.


Though supply seems to be steady for now, a plant-based commodity may make cultivation slow to adapt to an increased demand.

Additionally, as the virus spreads and more employees require time off to spend with kids out of school, deal with illness or simply practice social distancing, cultivators may not have the labor needed to get plants picked, prepped and packaged for store shelves.

Patients may also find themselves burning through their stash faster than usual as they have more time to medicate while spending more time at home.

Patients also express concerns over card renewals and evaluations, which must be done in-person. The Arizona Department of Health Services has so far not allowed for remote consultations nor the extension of expiration dates.

Dispensaries can offer their own delivery services; however, many already struggle to meet the market surge while trying to maintain limited staff to decrease social interaction.

Cannabis promotion firm With A Bhang, sent a letter to DHS Director Cara Christ, petitioning the department to temporarily modify requirements so that dispensary agents can deliver from multiple dispensaries with a single card. The DHS has not made any changes yet.

But apparently, they’re not the only state agency professionals feel are slow to react to the virus.
The Arizona Attorneys for Criminal Justice sent a letter March 25 to state and local officials urging stricter guidelines beyond already adopted practices.

Maricopa County Superior Court has limited in-person hearing to essentials such as felony pleas and sentencing, limit people inside the court room and delaying cases. But policies vary and they’re left to the discretion of judges and prosecutors.

He said hallways are still packed, negating any effects of distancing within the courtroom and officials have not been triaging violent, non-violent and victimless crimes.

The problem is particularly aggravated in rural areas, he said, where at least one official ordered the courts to maintain “business as usual.”

The AACJ letter calls for statewide policies restricting arrests of non-violent offenders to decrease jail populations, allowing early probation for non-violent and technical offenses to decrease prison populations and limiting in-person appearances at court as much as possible.

Politically, the state legislature has entered recess until April 13, and five bills concerning cannabis have run aground with the rest of the system, according to Mikel Weisser, executive director of National Organization for Reform of Marijuana Laws-Arizona.

The initiative may be the only one of the ballot this year, Weisser said, as several other initiative attempts struggle to gather signatures thanks to the shutdown of large gatherings and social distancing brought on by the COVID-19 outbreak.
© 2022 Tucson Weekly