Robyn Hitchcock looks back at 40 years on current tour 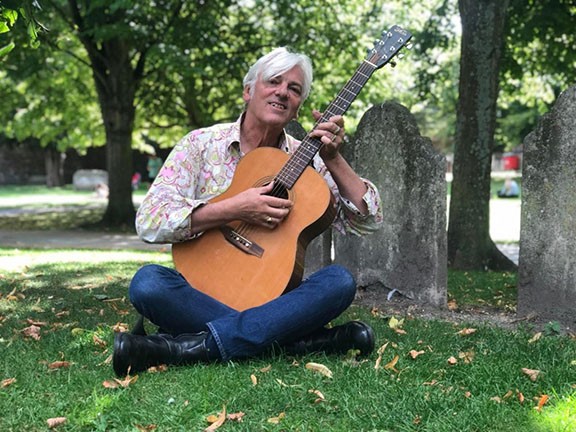 English singer/songwriter and former Soft Boys man Robyn Hitchcock has been compared to the very best: Bob Dylan, John Lennon, Syd Barrett, Roger McGuinn, Bryan Ferry and the like. Compliments don't come much greater, but it's also a massive error to try to box the guy in. Hitchcock's career, his songwriting, is full of quirky twists and turns. He's pop but rock. He's psychedelic but post-punk. He's Robyn Hitchcock, and he's exactly what he wants to be.

On that note, his most recent album came in 2017. It's his 21st full-lengther, and yet he chose to self-title this one.

"After 20 years or so in this business, everything you release is seen as a return to form, though nothing, of course, can quite compete with your glory days," Hitchcock says. "My last LP felt like the end of a cycle that began with the Soft Boys. It has the same template—electric guitars, bass, drums and harmonies—but comes from a much older me, 37 years later (3 and 7 are my favorite numbers: 3 is green, 7 is dark blue). It felt like I was wrapping it all up, having completed a circuit. I'd even moved to Nashville, which had been my mecca 50 years earlier when Bob Dylan recorded there. So I named the record after myself."

Which is, of course, his prerogative. It helps that the album is so great—somehow simultaneously familiar and a curveball. "I Want to Tell You About What I Want," the first song on the record, has a Lou Reed vibe, albeit with a British accent. But then it's a bit T-Rexy. Is that a Marshall Crenshaw influence maybe? Certainly power-pop. A touch of glam stomp. It's fantastic, which is great because we don't yet know when the next set of material will drop.

"I'm working on a collection of piano songs—mostly piano songs—which I hope to put on tape this year," Hitchcock says. "Currently I'm managing my legacy and stocking up the archives; there's no rush for a new release. There's plenty of records out there already, especially by me.  But I'm keeping busy, busier than ever."

The album was met with generally positive reviews, which isn't unusual for a Hitchcock release.

"The people who like my songs tend to like most of them—beyond that, to the world outside I remain invisible, pretty much," he says.

"Andy Partridge is one of the few people with whom I can sit at a table and make up a song," Hitchcock says. "I can never remember who contributes what; sometimes one of us brings in a title but after that we're out of the gun like two ferrets. It's a way of keeping two mature Beatles' fans out of trouble and making a few bob to supplement our meagre pensions... and an excuse for me to drop into Swindon whenever possible. Nashville is just up the road: definitely closer than Sydney. If Andy and I both last long enough, hopefully the next one will be a whole LP."

Hitchcock has been working with his partner, Australian country-ish singer/songwriter Emma Swift on her forthcoming debut album—the pair have released a couple of singles together in recent years. And then there was his work on the Juliet, Naked soundtrack, the 2018 romantic comedy starring Ethan Hawke as fictional musician Tucker Crowe.

"I released a 45 rpm 7-inch single of that song 'Sunday Never Comes' in 2019 too," Hitchcock says. "You can buy it at my shows or through my website. If you buy it mail order my cat Tubby will fly low over your back yard in his 1932 de Havilland Tiger Moth biplane, and drop it—bubble-wrapped and attached to a tiny parachute—over your javelina corral. Your alpha javelina will scamper to your back porch and hopefully leave it there. The fictional musician in Juliet, Naked was, in style, partly based on me so it wasn't too hard to knock out something that I might have written myself."

As that last quote proves quite clearly, Hitchcock is an eccentric soul. All of that joyously makes its way into his music, as it has for four decades, and it's part of why his art is so enduring. It's also why he has some devoted fans, though he says that he doesn't have any fan experiences that are printable.

"The Norwegian in the Pilot's Cap and the Fat Orange Ghoul are particularly vivid characters," he says.

The divided state of the UK, as well as the States, has created a toxic environment within which to try to create Hitchcock's brand of insular art.

"Another reason I've been slow to finish anything—last year was the first since 1970 when I didn't complete a single song—is realizing that my self-involved world is dwarfed and irrelevant compared to what is going on all around it," he says. "How to put the feelings that global warming and the return of fascism trigger into a song? It's easier to moan about it on Twitter. Britain is possibly less toxic as we don't as yet have guns and Jesus in our DNA like America does. But we're all destroying each other in the name of survival. On the plus side there are more photos of cats on the internet than ever."

Another plus side is we get to see Hitchcock right here are Club Congress this week. The man is a fan of this part of the world.

"This must be about my 10th gig at the Congress," he says. "When I first got there you could smoke cigarettes in the lobby. I've recorded at the old Wavelab studio—it's all on tape somewhere. I love the way the desert stretches away like an ocean, with the saguaro cactuses looking on from the foothills of the giant masses of rock. Some of them look like shrieking spirits, waving you away—or greeting you."

As for the set, Hitchcock is promising "40 years of songs in 90 minutes." And when that's over, there will be more shows. No Fat Orange Ghouls can stop him.